In the world of motorsports, the Indianapolis 500 has long been considered ‘the only race’. In May 1977, Janet Guthrie earned a place among the prestigious field of 33. A year later, overcoming impossible odds, Guthrie cobbled together her own team for a stunning success.  Yet just when her career should have rocketed forward, it suddenly, inexplicably stalled. 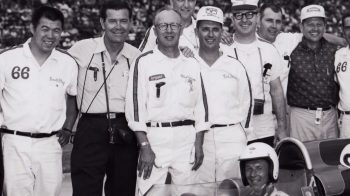 Directed by Jenna Ricker (“Ben’s Plan,” “The American Side”) with producers Caroline Waterlow and Nina Krstic (“O.J.: Made in America”) and Greg Stuhr (“The American Side”) comes the story of a female athlete breaking boundaries. What Janet Guthrie accomplished in the male bastion of mid-70s American motorsports, stands as a testament to one woman’s determination and skill – the kind too often relegated to the margins of history.

The review by Patrick Donovan

It was widely known that female participation of any sort at Indianapolis was discouraged and essentially banned throughout the first several decades of competition. As such, female reporters were not even allowed in the pit area until 1971. There have been nine female drivers to qualify, starting with Janet Guthrie in 1977.  She loved driving and felt at peace behind the wheel.

Barely making a living, with a broken car, no jewelry, no husband, no money, and no insurance, she was facing the end of racing even before she got her start.

Then got a phone call from Rolla Vollstedt asking, “How would you like a crack at the Indy 500?”  She called Chris Economaki and asked who is Rolla Vollstedt?

The Indy 500 has been the Superbowl of Racing since 1911.  Rolla Vollstedt was a car builder and a car owner and the last of the low-budget car owner/builders who loved the sport with a passion.  He would always find talent, top Indy names, Gordon Johncock, Tom Sniva, Cale Yarbrough, Johnny Rutherford, Mario Andretti and more.  Rolla was an innovator and visionary.  He would find these guys but never have the budget to keep them.

She was excited and then cautious because she knew that this was her one and only shot. She was limping slightly and said that she twisted her ankle. Later it was found out she actually broke it and drove with it on this trial run to see if she could actually make the car go fast enough. She fought through the pain and dealt with it, in a private run on California’s Ontario Speedway with no press and no announcements unless she was successful.  To tell you how driven Janet was, she got in the bathtub and soaked her cast off her leg.  That’s the determination she had, the guts and the drive that made her a champion.

Janet felt that because her past racing experience of driving on open tracks, driving at Indy was different with the wall and chain linked fence. It gave her the feeling that she was too close to the wall. So, being an engineer herself, she took a piece of welding rod, bent it 90 degrees and taped it in the passenger side of Rolla’s rent-a-car. Using it as a “wall-tickler”, she knew when she was too close to the wall after driving a few laps.  Dick Simon came over to the side of the car to see what was left of the welding rod and he saw the door handle was scratched. Janet then got into the Indy car and drove it like a champ. The decision was made by Rolla to GO FOR IT.

Early in her life, Janet started out as a flyer with a commercial flight instructors rating. Her father was a pilot and taught her how to fly.  She decided that she wanted to parachute out of a perfectly good airplane but the only way her father would let her do that was if he flew the plane. Flying was her first love and jumping out of an airplane gave her that feeling of freedom. She flew for the military and would take to a career in aeronautics and aerospace engineering.  Her first car is a Jaguar XK-120 Coupe.  It’s still considered the most beautiful cars in the world with a groan that you can hear coming for you.  She was introduced to race car driving in the parking lot of work where other cars were there going around a course with cones. She loved it, stopped being an aerospace engineer and started on the track to become a racecar driver.

At the time she wasn’t part of the feminist movement because she was already playing on the same field with the big boys and she didn’t have any problems with it. When they announced she was going to race Indy, to her astonishment, not everyone was that enthusiastic. She was not only invading auto racing but at the top of auto racing. She stood on her record which was second to none.  That didn’t seem to “cut the mustard” with the men.  The groaned, “She’s a woman”, “She’s going to sell sponsorship”, “She’s going to get the press”, “She going to get ‘hurt’”. The old guard men were jealous.

Janet was to be one of the first women, but Arlene Hiss entered before Janet in the Phoenix 500.  Janet entered and raced but was black flagged and because she was going too slow. They were so paranoid and was criticized. This dogged Janet’s chances for months.  Her performance would be closely observed at Trenton’s race before she would be permitted to race at Indy and that race began to change a lot of minds!

She knew the Blue Car was not optimal and it needed a new engine. Then she got a call from Coca Cola.  They made a commitment to pay her $500.00 and having her appear on all their “Tab” cola cans that were to be pink. She was insulted and walked away.  Then a word with AJ Foyt and a chance in his backup car.  There was an offer from NASCAR floating around.  They wanted her to run in a race the same day as Indy.

This was her chance to prove she could make it.  Men in regalia were not happy. She qualified for the race in 27th position at Charlotte Speedway.  Slowly but surely, she was making it.  NASCAR was a different world. She saw that she could drive and was good for business.

Then it was to Daytona. She was competitive and that’s what’s needed to get sponsors. The more she ran the better she got. She was a force to be reckoned with. Rolla was not happy, but she was the top rookie throughout.  She was having a ball and getting attention. Her life was being molded and then Talladega and qualified right behind Richard Petty.

She got a call from Pat Patrick with all the top stuff and told her she had to dump Rolla Vollstedt.  He walked out when she refused to fire Rolla.  She was loyal to Rolla and with his new car she pushed it up to 190 then hit a wall. She needed help; Phil Casey was introduced, and he got there just in time.  Jim Lindholm called to help. The team was assembled.

The problem: Does Tony Holman, the announcer who calls “Gentlemen, start your engines!” continue with that because even though the drivers don’t start their own engines, the mechanic does, or does Tony use another phrase. Another lady, Kay Mignatti the wife of the senior mechanic of Indy, who herself, had a USAC Mechanic license would be starting Janet’s car and standing with Janet against Tony Holman.

Janet became a key figure that women were pointing to and she became a reluctant pioneer like Amelia Earhart and all women who came before her.   In the day before the race, the drivers would be in a parade and fathers would hold their daughters on their shoulders to show that there was some hope for their future seeing Janet.

It was the day of the race and Tony Holman stated, “In the company with the first lady to ever qualify for the Indianapolis 500, Gentlemen start your engines…” Today, all announcers say, “Drivers, start your engines.”

Janet fought the press, the cohesiveness within the crew was starting to fall apart and a time came when she had to make money/sponsors putting her on a race-by-race basis and with only 3 companies that had the moxie to sponsor her. Where were all the other companies?  Was it because she was a woman?  She did everything she could, constantly getting another ‘NO’ from 200 to 300 companies. Then she went on Good Morning America and spoke her mind about not getting sponsors. This drove home her desire to race and she got a call from Texaco.  She now had 30 days to do what they said couldn’t be done, Janet was off to the races!  She had to go from being a team owner and leader and spokesperson for Texaco to be the driver. Then George Mignatti put his wildcat engine in the car. 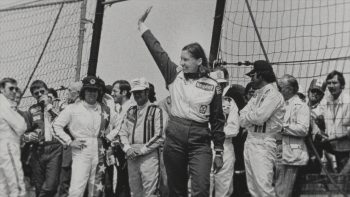 She once again qualified for Indy and she was going faster than George Mignatti thought his car could do.  He was as giddy as a schoolboy in a candy store.

The night before the race, at a tennis club, while playing, she tripped and broke her wrist.  The problem was the gear shift.  She could steer with her right hand, but she needed to shift with her left while driving with her right.  Even with problems, she persevered.  They were really optimistic after the last pit stop and almost the end of the race, she gave it her all and blew past the 9th place driver and into the top 10.  She climbed a mountain reserved for men beating Mario Andretti who finished in 12th. She revealed that she was driving with only one hand and said, “Who said women can’t do this…” 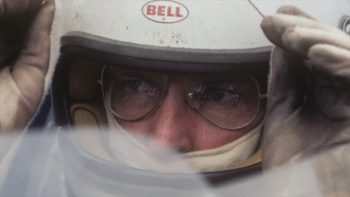 In 1982, in an interview with Howard Cosell, she opened up that racing was sexist and not a place for women. By stating her case, it was time for the truth knowing full well this could end her career.  She drove through that interview like all her other challenges in life, without fear.  Janet did what had to be done.  It would be another 13 years for a new breed of women to follow.  Those women would be:

For Janet, being able to compete in two of the most upper levels of auto racing, NASCAR and Indy, was the highlight of her life. She broke the rules and for a long time she avoided Indy after she left the sport.  But has returned on occasion for public events and to simply, remember.  You’d think she’d ought to be content with her successes but she’s not.  She’s still recognized today and wants to be remembered as a damn good racing driver and a lady but in reality, she’ll skip the lady thing and just be remembered as: A DAMN GOOD RACING DRIVER and that’s lady-like enough for me.