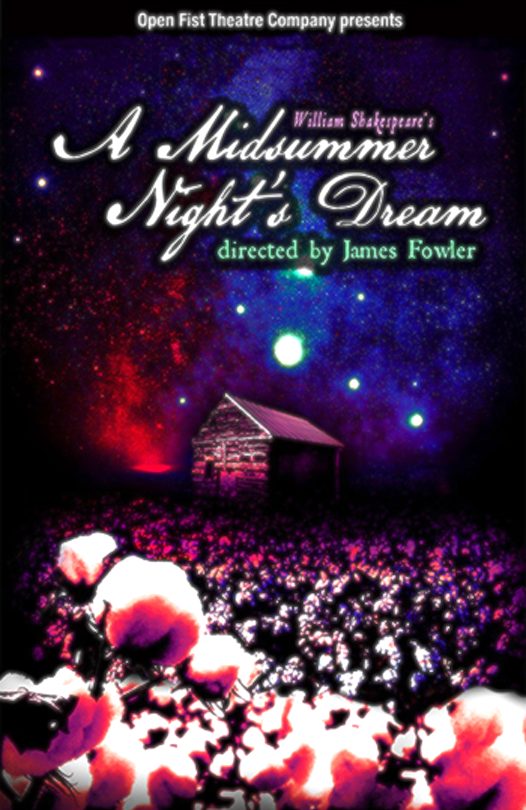 Los Angeles, CA (The Hollywood Times) 7/3/22 – Saturday, July 2, was the opening night of an innovative re-imagining of Shakespeare’s timeless comedy Midsummer Night’s Dream at the Atwater Village Theatre in Los Angeles in a production directed by James Fowler and featuring the Open Fist Theatre Company. A novel interpretation of Midsummer Night’s Dream, Fowler has relocated the scene of the play from some indeterminate time in Athens, Greece, to the Antebellum American South and Athens, Georgia circa 1855. James Fowler has previously directed Midsummer Night’s Dream as a predominantly white production, but he realized that Shakespeare’s play “lent itself beautifully to the world of unseen enslaved African people. I was stunned to discover how well this concept worked with the text. It made sense that the fairies, unseen to the lovers, are invisible to the plantation owners around them because they are enslaved.” With a talented cast, Fowler has made his rendering of Midsummer Night’s Dream into a marvelous study of the boundaries between white and black people in the Antebellum South and how those boundaries between them are transgressed. At the same time, the play reveals how we create fantasies or “dreams” about lovers who will never live up to our expectations.

Fowler’s Midsummer Night’s Dream opens with a glimpse of the Black slaves on a Georgia plantation and how in the night, we see “fairies” from the nether-world at night of the African slaves who work in the cotton fields by day. First, in the plantation mansion of Theseus (Bryan Bertone), the Duke of Athens (albeit probably the mayor of Athens, Georgia), we heard Theseus pontificating as is his wont in Shakespeare iambic pentameter with a strong Southern drawl. He is trying to impress his bride-to-be, Hippolyta (Heather Mitchell), the Queen of the Amazons, who seems here to be a rather feisty and independent marriage partner, like many of the women in Shakespeare’s comedies. The Amazonian origins of Hippolyta are not pursued by Shakespeare, but perhaps we might think that she comes from a moneyed family in the North.

Meanwhile, another planned marriage, between Hermia (Sandra Kate Burck) and Demetrius (Devon Armstrong) has been upset by the fact that another man, Lysander (Dylan Wittrock), has supposedly bewitched Hermia into loving him instead of her betrothed. Because Hermia’s father, Egeus (Alexander Wells), wants his daughter to marry Demetrius and shows up with a shotgun in his arms to force the marriage. Theseus (as Duke) orders Hermia to marry Demetrius or else enter a nunnery and take no husband. Hermia is beside herself and has no intention of marrying Demetrius. When Lysander arrives, she rushes to him and her father threatens to kill him right there – based on his sense of patriarchal right and what is supposedly the law of Athens at the time.

Advertisement
Faced with this rather unappealing choice, Hermia decides to elope with her beloved, Lysander. Hermia confides this plan to her friend Helena (Anna Marie Wilding), but Helena blabs it to Demetrius (whom Helena wants to marry herself). Helena, played brilliantly by Wilding, is so upset with Demetrius’ lack of interest in her, and vows to follow Helena in the forest at night as a witness to her friend’s elopement but despairing of finding love for herself.

Meanwhile, a group of manual workers from Athens, each with their own trade (Nick Bottom the weaver, Peter Quince the carpenter, Francis Flute the bellows-maker, etc.) meet to rehearse a play, based on the story of Pyramus and Thisbe from Greek mythology, which they will be performing as the entertainment at Theseus and Hippolyta’s wedding. In Fowler’s play, these are actually Black slaves who seem to have specialized trades and theatrical skills. In Shakespeare’s verbiage, they are called “mechanicals” and Peter Quince is an odd white fellow (played by Debba Rofheart), who directs his players Bottom (Michael A. Shepperd), Flute (Malik Bailey), Starvling (Syanne Green), Snout (Erica Mae McNeal) and Snug (Azeem Vecchio). The “mechanicals” except for Bottom (Michael A. Shepperd) are doubled up in the roles as the “fairies” which encircle Oberon (Philip C. Curry), King of the Fairies) and his Queen Titania (Ash Saunders) – Mustardseed, Peaseblossom, Cobweb, and Moth.

In Act II of the play, Oberon, King of the Fairies, tasks the mischievous sprite, Puck (also known as Robin Goodfellow, in an amazing performance by Monazia Smith) to go and find the juice of a magic plant which has a peculiar quality: When sprinkled on the eyes of a sleeping person, they will wake up and fall for the first person they see. Oberon has an issue with his wife Titania and apparently it all has to do with a changeling child, supposedly the offspring of a Yoruba goddess. In order for Oberon to convince his wife, Queen Titania to give him their changeling child, he sprinkles the magical juice on her eyes. Oberon tells Puck to do the same to Demetrius’ eyes, so he will wake up and fall for Helena rather than Hermia. However, Puck accidentally sprinkles the plant on the wrong man, administering it to Lysander’s eyes instead of Demetrius’! And the results lead to high comedy.

To amuse himself, Puck uses his magic to give Bottom (Michael A. Shepperd), the weaver and would-be star of Peter Quince’s play Pyramus and Thisbe, an ass’s head in place of his human head. When Titania wakes up, she sees Bottom with an ass’s head and immediately falls madly in love with him, and lustily cannot keep her hands off of him. Titania sends for her fairy attendants (Peaseblossom, Cobweb, Mustardseed, and Moth) to wait upon Bottom – scratching his itchy head and getting him appropriate food for a donkey. Oberon has tried to correct Puck’s mix-up with Demetrius and Lysander by sprinkling Demetrius’ eyes with the magic juice, with the result that both men now love the same woman: Helena! This is the farcical center of the play and cleverly staged with the two young men fighting over Helena, who cannot comprehend what is the nature of their sudden affection. Soon in the forest setting arrives Hermia, all disheveled and missing half her clothes. She does not understand why Lysander’s love has turned to hate. She is rebuffed by both men and mocked by Helena, who is overwhelmed by the two men forcing their lusty affections on her.

Amid this seeming chaos of the nighttime dreamworld, Oberon, King of Fairies, decides to intervene and instructs Puck to undo the damage. After seeing Titania, his wife and Queen of the Fairies make an “ass” or fool of herself doting on the magically-altered Bottom as a donkey or “ass,” he applies his own fairy magic to put her to sleep. In turn, he instructs Puck to use a different magic herb to release the four Athenian lovers from their various love-spells. Theseus, the Duke of Athens arrives in the woods with Egeus in tow, as he is looking for his disappeared daughter Hermia. They spot the young couples asleep on the ground, scantily clothed, and wonder what has happened. As they are awakened, each of the younger couples ends up with the right person: Lysander is with Hermia, Demetrius (now in love) with Helena, and Bottom has his proper head back.

That, of course, is not the end of the play. In Act 5, the “white” folks head back to Theseus’s plantation house in Athens (Georgia) and, before the wedding of Theseus to his bride Hippolyta, there is time for some entertainment. The players or “mechanicals” in Peter Quince’s ragtag theatre troupe are ready to perform their version of Pryamus and Thisbe, a tragic story from Ovid retold as a farce by the actors. Bottom (Michael A. Shepperd) is outrageously funny in his attempt to dominate the play. Malik Bailey is a delight in his hammed-up performance as Pyramus’s love Thisbe – with stage direction from Peter Quince (Debba Rofheart) to keep his voice falsetto. Erica Mae McNeal is the supposed Wall, through which the two lovers whisper their words of passion. Azeem Vecchio, supposedly “slow of study,” is the lion who attacks and devours Thisbe. Syanne Green is Moonshine, the light of the moon, in which this Ovidian tale is retold and turned to farce. The scene with curious commentary by the “white” folk in the plantation house of Theseus offers us a play-within-a -play and thus one of Shakespeare’s more clever commentaries on his own stagecraft. It is the dissident lowlife characters who end up dominating the stage and, in Fowler’s reimagining of the play, the Black slaves on the plantation.

In this rendering of Midsummer Summer Night’s Dream, I am led to recall what the novelist William Faulkner did in many of his novels by making Black characters the ones who truly understand what illusions on which the vision of white aristocracy in the Antebellum South was constructed. The play closes with a scene of push-back from the Black slaves on the Georgia plantation, a scene which echoes the opening movements on stage. The nighttime “dream” of Black freedom of movement and freedom from slavery becomes a dance of a “dream deferred” – as the Black characters being “fairies” can only hope to be liberated from the oppression of their masters. In a stunning coda, Puck (Monazia Smith) reveals the marks of slavery and we are left to ponder what scars American history has buried and perhaps Shakespeare somehow intuited in his time.

As director James Fowler explains, “I imagine African slaves on the plantations as people who, despite horrendous hardship, carried magic. In this production, we’re able to see their magic played out in the lives of the people around them who don’t ever see them. In many ways, I believe that this may be Puck’s dream we are experiencing until faced with the brutal reality and reminder of life for the enslaved in 1855 Athens Georgia.”

James Fowler is an accomplished Black director, actor, and producer. He points out that he “like many others have been subject to the often unconscious bigotry of the white theatre practitioners for whom we have worked. The resilience and unmatchable efforts of the BLM movement have, of late, made space for fresh narratives, and for the non-traditional retelling of classic stories in the theatre at large.” James Fowler’s credits include The Fantasticks at the Sierra Madre Playhouse, The Music Man at Poway Center for the Performing Arts, Romeo and Juliet at L.A.’s Pico House, and A Midsummer Night’s Dream at Sierra Madre Memorial Park.

A Midsummer Night’s Dream runs July 2 through August 13, with performances taking place on Fridays and Saturdays at 8 p.m. and Sundays at 7 p.m. General admission to all performances is $25, with $15 tickets available to students, seniors and veterans with valid ID. Atwater Village Theatre is located at 3269 Casitas Ave in Los Angeles, CA 90039. Parking is free in the ATX (Atwater Crossing) parking lot one block south of the theater. For tickets, call: (323) 882-6912 or go to: www.openfist.org.