The Event is Available for Purchase Now at

SHOWTIME.com/PPV and via the SHOWTIME® App

The pay-per-view event kicks off at 9 p.m. ET/6 p.m. PT and is widely available for purchase and live streaming in the United States at SHOWTIME.com/ppv and via the SHOWTIME app for a suggested retail price of $59.99 (SRP). All U.S. consumers who purchase the event through the SHOWTIME app or SHOWTIME.com can watch it live through the SHOWTIME streaming service app on any supported devices including Apple iOS and tvOS devices, Android Mobile, AndroidTV, Roku, Amazon FireTV, Samsung Smart TV, Xbox One, LG Smart TV, as well as online at SHOWTIME.com. The event is also available for purchase in the U.S. via satellite and telco systems through DIRECTV®, DISH, Sling TV, Vubiquity and on the Sony PlayStation™ store. 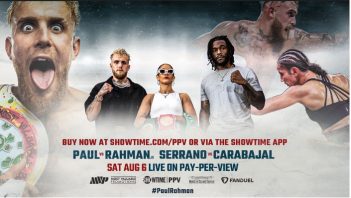 DAZN will broadcast the event in the United Kingdom and Ireland, as part of the monthly subscription and ESPN LatAm will be the exclusive cable, satellite, internet/digital carrier in Latin America. Paul vs. Rahman Jr. is also available down under via FOX Sports Australia.

Paul (5-0, 4 KOs) and Rahman Jr. (12-1, 6 KOs) will meet after the two erupted during the kick-off press conference over who was the better man during sparring sessions they had in 2020. Paul, a YouTube star and influencer-turned-pro boxer trains under the tutelage of Danny Smith and B.J. Flores in Puerto Rico and was named the Sports Illustrated 2021 Breakout Boxer of the Year. Rahman Jr. is the son of the former two-time heavyweight champion and has trained under boxing sages like Emanuel Steward, Calvin Ford and now Yoel Judah, father and trainer of the former two-division world champion Zab Judah.

The other half of the dual main event features seven-division women’s champion Serrano, (42-2-1, 30 KOs) of Brooklyn, who will defend her featherweight titles against Argentina’s Carabajal (18-5-1, 9 KOs) in a 10-round featherweight bout. Serrano made history in April when she and Katie Taylor were the first women to headline a main event at MSG. In the co-feature, teenage sensation,18-year-old Ashton Sylve (7-0, 7 KOs) of Long Beach, Calif., will face Braulio Rodriguez of the Dominican Republic in an eight-round lightweight bout. Knockout artist Brandun Lee (25-0, 22 KOs), of La Quinta, Calif., will face Will Madera in a 10-round super lightweight to open the pay-per-view telecast.

The pay-per-view telecast is produced and distributed by SHOWTIME PPV. Four-time Emmy® award winner David Dinkins Jr. will serve as executive producer and Bob Dunphy, son of legendary Hall of Famer Don Dunphy, as director. The pair has produced the three highest-grossing pay-per-view events of all time (Mayweather-Pacquiao, Mayweather-McGregor, Mayweather-Canelo).

In the leadup to the dual headliner, SHOWTIME SPORTS will offer an installment of its Emmy® Award-winning series ALL ACCESS, bringing fans behind the scenes as Paul prepares to face the first full-fledged boxer of his career and Rahman Jr. prepares for his first big moment in the spotlight.  The series also features Serrano as she trains in her hometown and shakes off the remnants from her last fight in advance of her title defense. ALL ACCESS: PAUL VS. RAHMAN premieres on Saturday, July 30 at 8:30 p.m. ET/5:30 p.m. PT with ALL ACCESS: PAUL VS. RAHMAN EPILOGUE premiering on Saturday, August 13.

The event is co-produced by SHOWTIME PPV and Most Valuable Promotions (MVP), a company founded by Paul and Nakisa Bidarian and promoted by Holden Boxing.

Showtime Networks Inc. (SNI), a wholly owned subsidiary of Paramount, owns and operates the premium service SHOWTIME®, which features critically acclaimed original series, provocative documentaries, box-office hit films, comedy and music specials and hard-hitting sports. SHOWTIME is available as a stand-alone streaming service across all major streaming devices and Showtime.com, as well as via cable, DBS, telco and streaming video providers. SNI also operates the premium services THE MOVIE CHANNEL™ and FLIX®, as well as on demand versions of all three brands. SNI markets and distributes sports and entertainment events for exhibition to subscribers on a pay-per-view basis through SHOWTIME PPV®. For more information, go to www.SHO.com.