Los Angeles, CA (The Hollywood Times) 4/4/21 –Based on Margaret Atwood’s 1985’s novel, The Handmaid’s Tale, Hulu’s The Handmaid’s Tale portrays a dystopian world where a group of fundamentalist Christians seizes the U.S. government (renamed “Gilead”) in the midst of a nuclear holocaust. In this world, wealthy men (or “Commanders”) control the State and women become their property. The series follows June’s account (portrayed by actress and director Elizabeth Moss) of being a handmaid (a class of women who are raped by these Commanders in order to bear their children). Moss says, “Yeah, I mean, I think that so much of June’s journey, especially in the back half of the season which I can’t talk as much about, but it’s about a feeling of sort of rage and anger and about the desire to sweep things under the rug, the desire to say that everything is okay now, the desire to say that it’s all going to be fine and everything’s going to be all right and nothing was ever a problem and let’s just forget everything that just happened.  And that’s so much of what June’s journey is, is sort of screaming into the wind, “We will not forget,” and I think that is extremely relevant.” Previous seasons followed June as she navigated this dystopia, but, in the new season, she now trying to take down Gilead. Atwood’s main rule for developing the Handmaid’s Tale was that the events in the book were based on historical events. In many ways, the upcoming season of Hulu’s Handmaid’s Tale mirrors this original intent. 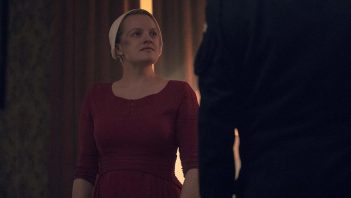 One way that the upcoming season of the Handmaid’s Tale will address current events is its response to shifting to the Biden administration. When talking about the upcoming season, producer Warren Littlefield explains, “But the Democrats take back the White House.  They hold the House and they gain control of the Senate. Champagne, a calm that comes over us, sanity that we haven’t had for four years ‑‑ not even close.  So the sea is as choppy as it’s ever been, and I think that that’s true for the journey and the story we’re telling.  Not intentionally, but we do seem to mirror the very issues of life and safety and human rights that we’re wrestling with every day in the streets of this country.  We’re playing them out in our show.  I don’t see that changing.  I wish we could feel today a little more champagne‑popping mood, but I don’t think that’s the case.” Thus Littlefield’s account focuses on how the current struggle for human rights is still ongoing despite changes in the current administration.

Another way that the upcoming season of the Handmaid’s Tale mirrors real-life events is that its production was altered because of Covid-19. Producer Bruce Miller suggests, “And in terms of rewriting for COVID and changing things for COVID, definitely, a ton of things had to be changed in the show.  Just the practical realities of producing and making the show on the ground were very, very difficult.  But the people in front of the camera, for the most part, we tried ‑‑ and I know Lizzie will talk to this more than I can ‑‑ tried to protect that space, that those guys were doing what they would have been doing anyway in front of the camera because that’s the space that we wanted to protect by being so careful about testing, being so careful about everything else so that they could do their jobs and act and they wouldn’t have to think all the time about COVID.” Thus, even the shooting and the story’s plot had to be altered because of the Covid-19 pandemic. 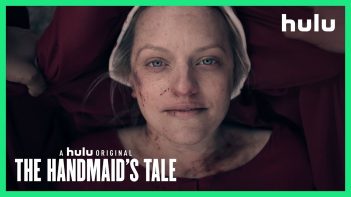 Ultimately, the Handmaid’s Tale is a story that was relevant in the 1980s as it is now. Moss describes, “And I think a lot of our story tends to resonate with people and feel relevant because those themes are never going to be something that is not relevant and doesn’t feel truthful.  Unfortunately, then there are these gigantic events that happen in real life that have been in the book or have happened on the show, which is far beyond me to comment on.  But I think for all of us and for what I feel is most relevant about the show is the humanity of it and the human nature, the problems that we all encounter whether we have big lives or small ones or wherever we are, and I think that’s, for me, where I find relevancy and truth.” Thus, the show will not only be timely, but the show will also continue to resonate with future audiences.