Premieres Tonight, Saturday, November 26 at 8/7c and Stream the Next Day

Along with Kelsey Grammer, the movie stars his real-life daughter, Spencer.

“The 12 Days of Christmas Eve” is the story of Brian Conway (Kelsey Grammer), a successful businessman whose relationships with those around him have really suffered.  While this Christmas season has been the most successful for his business, he’s divorced, his relationship with his daughter Michelle (Spencer Grammer) is strained and he doesn’t have a meaningful connection with his only granddaughter. After Brian gets into a car accident on Christmas Eve, Santa gives him twelve chances to re-do the day and repair the relationships in his life to find the true meaning of Christmas. For Brian, these twelve days are a journey of self-realization about life, love and happiness as he attempts to right the wrongs of his life in pursuit of the Christmas spirit. 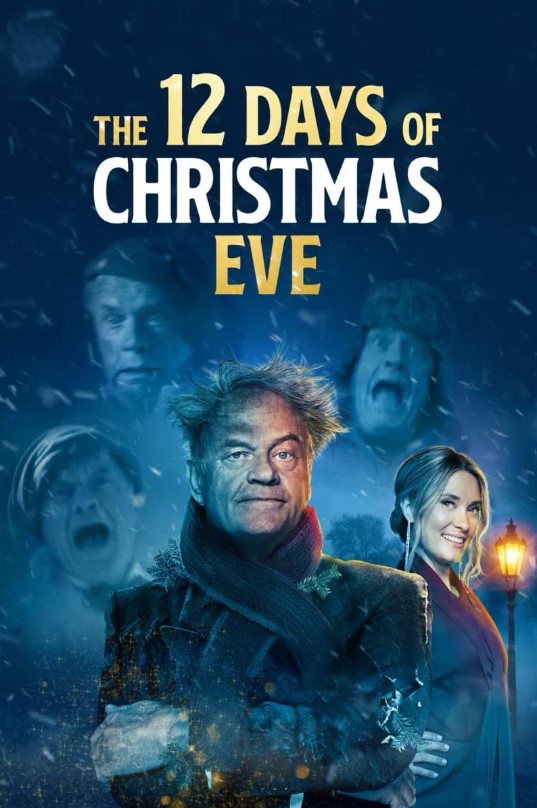 ‘The 12 Days of Christmas Eve’ was filmed entirely in Connecticut, particularly in New London County.

There are many holiday movies out there and coming up. I have to say honestly this is the best one so far and a Must SEE!

Kelsey Grammer, Tom Russo (Frasier, Light as a Feather, The Game) and Jordan McMahon (The Game) are executive producers. The script is written by Eirene Tran Donahue (A Sugar & Spice Holiday) and directed by Dustin Rikert (Two Tickets to Paradise).

Earlier this month The Hollywood Times was honored to be part of It’s A Wonderful Lifetime & TCA virtual press day panel with many other media outlets with Kelsey and Spencer Grammer. The first question asked by Syfy Vision: What was it like working together on this film?

Kelsey: It was completely unlike how we work together in real life.” (Both he and his daughter Spencer started to laugh) “We were very professional.”

Spencer: I feel the same way, we had a wonderful time working together actually and I would to it all of the time.

Kelsey told Spencer “you look really pretty today by the way.” Spencer said “it is the lighting and a wonderful hair and makeup team”

TV Insight asked what attracted them to this movie.

Kelsey: We developed this movie over the last couple of years and pitched it to Lifetime and they were very enthusiastic. We loved the idea of Spencer actually playing my daughter and just a perfect fit all the way around.  Lifetime greenlit the movies and the script was in about a month and a half and my daughter will play my daughter. We shot the movie in 3 weeks and had the most lovely time. Just like love is supposed to be.

Spencer: The idea of being able to play Dad’s daughter in a film has always been a dream of mine and also being able to do a holiday movie together, I feel like it was really special and unique. The first holiday film I’ve done and hopefully I’ll do many more.  To be able to work with my Father, wo is such a legend, such an incredible comedian and talented actor was really an honor. We had a great time, honestly, so much fun.

Monica asked about preparing for this movie, being like a National Lampoon comedy.

Kelsey: Preparing for this film for quite some time, sort of a knob to Groundhog Day and Dickens Christmas Carole. The charm of it was filing in Connecticut and New England and not in Canada. Give the folks a break.  We had a fantastic director Dustin who was remarkable!  Hit the ground running. Just make yourself open to it.

Spencer: Preparation and shooting in Connecticut felt like Christmas even while shooting in September.  It was magical to spend the time with my real dad. I can do 100 Christmas moves. Healing for the both of of us and having a second chance.

Jay asked Spencer did she ever imagine playing opposite her dad after spending time on set with her dad all those years ago.

Spencer: I loving being on the set of Fraser and seeing my dad. I thought the two of us would do a theater production before a film shown to the whole world.

A great conversation between the two of them about this.

The Hollywood Times (Judy Shields) was called upon to ask a question:

Thanks for joining us today. I saw the movie yesterday, it was amazing, you have to have tissue to watch your film. Kelsey said “Thank you, thank you very much.”

Kelsey: Well, he read, sent in a tape, something I’m sort of unfamiliar with in a weird way when it comes to casting. He did the nicest job. The more interesting of the bunch. He seemed to have some pliability. What turned out to be a great choice was, when we first started filming, everything with Santa Claus was shot in one day, his ability to take a note, we shot half a scene and then I started to think, oh my goodness, Santa has a plan and this guy needs to know that Santa has a plan and as soon as I gave him that note, he just went for it, he was lovely. He just threw every nuance in there like” (Kelsey got quiet and said “I’m starting to tear up.”) and he started laughing and Spencer said “you are going to make me cry.”  Kelsey said “Santa’s plan was to save this man and he does (somewhat holding back tears, and laughs again). I said “it was nice to make you cry.” Both Kelsey and Spencer cracked up. Kelsey said “I cried all through the movie” and started to laugh again. Spencer said “I think we both did actually!” as Kelsey wiped both of this eyes and said “thank you.”

The panel ended with Spencer telling us the story of when she was on a Macy Thanksgiving Day parade float and was to stand there with her dad, but she was so cold she hid in an acorn on the float and her best friend Pablo was standing next to her dad when they announced Kelsey and his daughter Spencer, it was not her but Pablo. Great story indeed and Kelsey said he even mentioned that the on David Letterman show that year.  Spencer also went on to tell us about going to New York for the holidays to see the lighting of the Christmas tree at Rockefeller Center, and also the time that she got to be a private shopper at FAO Schwartz, where the store was closed and she got to walk around and get whatever she wanted. Great story.

Watch Kelsey and Spencer on the TODAY show: