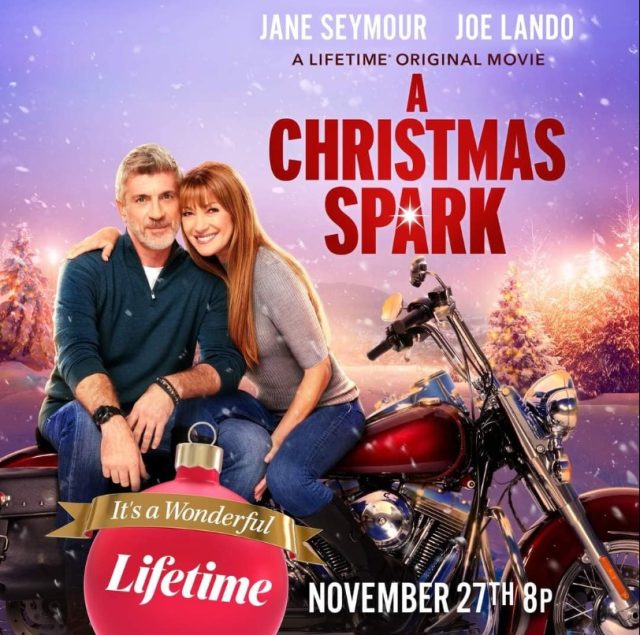 Premieres Today, Sunday, November 27 at 8/7c and Stream the Next Day

Recently widowed Molly (Jane Seymour) has lost her zest for life and given up on ever finding love again.  But when she decides to visit her daughter for Christmas, she has no idea what holiday magic is in store for her.  A former drama teacher, Molly reluctantly takes on the job of directing the town’s Christmas pageant and soon finds herself falling for her leading man, Hank (Joe Lando), the town’s most eligible bachelor.  As Molly and the irrepressible Hank fall in love, she rediscovers her inner free spirit and finds a new lease on life.  And when the star of the pageant loses her voice moments before the show, it will be up to Molly to step into the spotlight and shine brightly for the first time in her life.

It was so wonderful to see the chemistry of these two actors that we all fell in love with on Dr. Quinn.  This movie will touch your heart with a message of love yourself, family and the spirit Christmas brings to us all.  Watch this one with the love of your life and share it with all your family.

A Christmas Spark is produced by Lighthouse Pictures and is being distributed by Sony Pictures Television. Toni Braxton, Stephen Bulka, and Jamie Goehring are executive producing. Rhonda Baraka directs from a script by Eirene Tran Donohue.

During a recently Lifetime and TCA panel with Jane Seymour and Joe Lando they talked about the movie, working together and the holidays. Jane said “it’s all about family, getting together and cooking.  Why we all seem to think we need so much more food at Christmas then we do on a regular basis.”  She has grandchildren and extended family members and it’s a great big bundle of fun.  Joe said “I like to go away on vacation after Christmas, just being together with everybody, eating and laughing and we go over to Jane’s house and have fun.” Jane chimed in and said “it’s true!”

They both said it was super easy being back together on screen because they have done the homework over and over again and that it was absolute magic working together again.  Joe said that when Jane told him about the Lifetime movie script and he read it he didn’t even think about himself being it and later on he was offered the part and said “thank you.” Jane was asked whether she preferred comedy over drama.  She said he was mostly about drama under wedding crasher, then she really enjoyed doing comedy but that she loved to act and that she could not chose between comedy and drama.  Jane was also asked about being on a motorcycle before and she said that she had been but for the filming of this movie they were not able legally to ride on it and was just on a trailer being pulled around a park and stunt doubles were used.  But they both enjoyed that last day of film on the motorcycle.

Of course they were asked about doing Dr. Quinn again and both of them said that it would have to be better than before and they would not want to lower the bar. Joe said that the Dr. Quinn set was burned to the ground a couple of years ago and he would like to see the towns people rebuilding if they did a new movies or series. They would have to see after 32 years later if someone might pick it up for a remake. Joe said that he was retired until Jane came around!