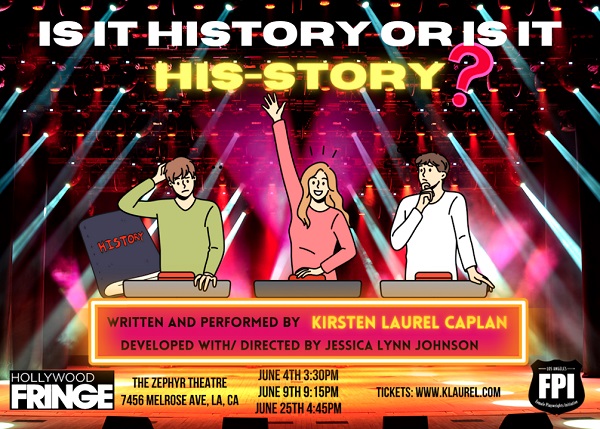 On Thursday, June 9, was the first of three performances of Kirsten Laurel Prather Caplan’s Is It History? Or Is It His-Story? Performed at the Zephyr Theatre in West Hollywood as part of this year’s Hollywood Fringe Theatre Festival.

This cleverly conceived one-woman show was written and acted by Kirsten Laurel Prather Caplan, performing six different roles in a rapid-fire multimedia presentation, as the self-aggrandizing host of a fictional television game show, “Opposite Viewpoints.” The show features four “expert” panelists, or rather pundits, who comment on the historical figures that are presented during the satirical game show. Kirsten takes on all four roles, as well as the special guest also named Kirsten, who is a Middle School Drama teacher tasked to find heroes in American History for her 7th & 8th grade drama class. She finds amazing women that she never learned about in school and that are currently barely covered in history books – and certainly not found in current approved 7th Grade American History textbooks.

Perhaps it is no irony that the real Kirsten Laurel Prather Caplan is a theatre actor, director, and writer – who has directed 20 middle school drama productions herself. The basic concept behind Kirsten’s one-woman show is a television game show that tackled fairly serious questions and in this fictional segment, the show – “Opposing Viewpoints” – the focus is on how significant historical personages get into the approved historical textbooks for school-age children.

The topic of this segment “Is It History? Or Is It His-Story?,” is built around a question asked by an invited special guest, also named Kirsten, who is interested in history, largely from the viewpoint of being a middle school drama teacher. This Kirsten proposes three women from early American history that she found to be interesting. The four “expert” panelists, following the format of game show, watch a short video presentation on the screen behind the podium and then are given time to comment on the appropriateness of each historical woman to be included – or not included – in the 7th grade history textbook.

Writer Kirsten Prather Caplan has a fun time taking on the divergent roles of these four would-be panelists who are basically pundits. There is Professor Smarty Pantz, an Ivy-league scholar and historian, who seems to have a command of all the facts and tends to sound off pompously. Professor Woke who seems to lecture somewhere more progressive, possibly Howard University, and is glad to correct misguided assumptions about Critical Race Theory (which he says is related to discrimination in housing and part of law school courses). We have Mrs. Karen Straightlaced, from Texas with her interest in Christian Family Values and making America a Christian nation for the children. Finally, there is a very loud “Bob” Racy, an abrasive Ross Limbaugh-type, who is always chest-beating in self-adulation and pushing his podcast with his ultra-conservative interest in history from his own viewpoint.

Holding this satiric television show together is the somewhat wacky hostess herself who is glad to promote her own brand of soup and soap during commercial breaks. The multimedia use of projections on the screen behind the podium provide the feel of a television game show where the viewers get to vote, as well as the panelists (but not the audience). The character Kristen, the Middle School drama teacher, is invited to the show “Opposing Viewpoints” and presents a case for three undervalued historical figures that might be worthy of inclusion in the standard 7th grade U.S. History textbook. Interestingly, all three are women.

The first is Mercy Otis Warren (1728 – 1814), a poet, playwright and pamphleteer during the American Revolution. During the years before the American Revolution, Warren published poems and plays that attacked royal authority in Massachusetts and urged colonists to resist British infringements on colonial rights and liberties. She was married to James Warren, who was likewise heavily active in the independence movement. James Warren is in the standard U.S. History textbooks, because he was a politician and military officer who served as the Speaker of the Massachusetts House of Representatives, 1787-1788 and was a strong supporter of resistance to British policies prior to the American Revolution. He belonged to a small group of American Patriots, but interesting enough his wife Mercy Otis Warren acted as secretary to the group.

During the debate over the U. S. Constitution in 1788, Mercy Otis Warren issued a pamphlet, Observations on the new Constitution, and on the Federal and State Conventions written under the pseudonym “A Columbian Patriot,” that opposed ratification of the document and advocated the inclusion of a Bill of Rights. In 1805, she published on the earliest histories of the American Revolution, a three-volume History of the Rise, Progress, and Termination of the American Revolution. The pundits comment (through the actress) and two support her inclusion in history textbooks, while two oppose.

Moving on, our Middle School drama teacher Kirsten asks about Phyllis Wheatley, the pioneering African-American poet, who was born in Gambia around 1753 and, at age eight, kidnapped and brought to Boston on a slave ship. She was purchased by John Wheatley as a servant for his wife Susana. The Wheatleys educated Phyllis and she soon mastered Latin and Greek, going on to write highly acclaimed poetry. She published her first poem in 1767 and her first volume of verse, Poems on Various Subjects, Religious and Moral, in 1773. Having been freed from slavery, she later married and struggled financially, with Wheatley unable to find a publisher for her second volume of poems. Poems on Various Subjects is a landmark achievement in U.S. history. In publishing it, Wheatley became the first African American and first U.S. enslaved person to publish a book of poems, as well as the third American woman to do so. In considering the eligibility of Phyllis Wheatley for the 7th grade U.S. textbook, “Bob” Racey states that poetry belongs in an English textbook and is not relevant for history. He argues to exclude her.

The third woman that our Middle School teacher holds up for consideration is Sarah Josepha Buell Hale (1788 – 1879), best known as an activist and editor of the popular women’s magazine Godey’s Lady’s Book. Hale famously campaigned for the creation of the American holiday known as Thanksgiving. In addition to her publishing work, Hale was a committed advocate for women’s education (including the creation of Vassar College in Poughkeepsie, New York), and raised funds to construct Massachusetts’s Bunker Hill Monument and save George Washington’s Mount Vernon estate. She lobbied state and federal officials to pass legislation creating a fixed, national day of thanks on the last Thursday of November. She believed that such a unifying measure could help ease growing tensions and divisions between the northern and southern parts of the country. Her efforts paid off: By 1854, more than 30 states and U.S. territories had a Thanksgiving celebration on the books, but Hale’s vision of a national holiday remained unfulfilled until President Abraham Lincoln did so in 1862.

Interesting reactions from the four pundits, with Mrs. Karen Straightlaced, gushing enthusiastically over a woman who valued Thanksgiving. It looks like Sarah Josepha Buell Hale is a shoe-in for inclusion in the U.S. History textbook, but Professor Woke pushes the buzzer against it – because of the real hidden history of Thanksgiving in U.S. History. The day commemorates the 1621 celebration at Plymouth Plantation where the settlers held a harvest feast after a successful growing season of growing corn and catching eels, thanks to the help of the local Patuxet tribe. What is left out of the story is the decimating effect of European diseases on the local Massachusetts tribes. Professor Woke counters that the U.S. Thanksgiving holiday originated in 1637, in an event announced by the governor of Massachusetts to celebrate the massacre of 700 men, women, children, and elders from the Pequot tribe. The facts of the 1637 massacre are confirmed by Professor Pantz – and so the ugly historical truth emerges and the pundits end up not including Sarah Josepha Buell Hale in the history books.

Theatre can be educational and not just entertainment. Certainly, Kirsten Laurel Prather Caplan shows us both in her cleverly written one-woman show Is It History? Or Is It His-Story? There is so much humor in this zany fast-paced show that you don’t get bogged down in the details, so much as the way current American pundit culture tends to interpret that is historically important. Of course, history is always the interpretation of the past and each successive generation will continue to seek to make sense of the past with new insights. In so doing, we discover gaps in the traditional narratives that demand our attention and force us to re-evaluate who is significant in history and their roles. Kirsten Laurel Prather Caplan has done just that in her new show Is It History? Or Is It His-Story? at the Zephyr Theatre. In 2020, Caplan wrote her show Lady Liber Tease and won a “Best of Fest” award at the Hollywood Fringe.

The play Is It History? Or Is It His-Story? is directed by Jessica Lynn Johnson, an amazing theatre director who has toured internationally and has created over 70 solo shows for the Hollywood Fringe Festival over the years. Thursday night was the World Premier of Is It History? Or Is It His-Story? at the Zephyr Theatre, 7456 Melrose Avenue, Los Angeles, CA 90046. There will be two more performances at the Hollywood Fringe Festival: Saturday, June 11, at 3:45 pm; Saturday, June 25, at 4:45 pm. Tickets are $12.00. Online ticketing: http://hollywoodfringe.org/projects/7563.