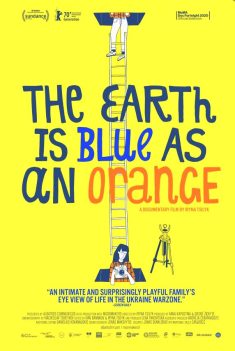 Los Angeles, CA (The Hollywood Times) 4/27/22 – Currently available to view online through May 5 on Laemmle’s Virtual Cinema website is Irnyna Tsilyk’s documentary The Earth is Blue as an Orange (Ukraine-Lithuania, 2020). Winner of the Directing Award for World Cinema Documentary at the 2020 Sundance Film Festival, The Earth is Blue as an Orange stands not only as a remarkable document of the Russo-Ukrainian War in the war zone of Donbass, Ukraine, through the lens – literally – of this family’s creative process. But it is also an optimistic testament to the power of art and beauty in the face of destruction. The Earth is Blue as an Orange not only becomes about how an ordinary family uses film to reframe their life, it also makes us question our attitude towards the subjects of narratives about war. Film Movement, which favors smaller international films, indie films and documentaries, picked up this film for distribution, so it will soon be available at their website: https://filmmovement.com/home.

Single mother Hanna Gladka and her four children live in Krasnohorivka, a town on the front-line war zone of Donbass, Ukraine, where the fighting between pro-Russian separatists and Ukrainian defense forces has been going on since 2014. While the outside world is made up of bombings and chaos, the family is managing to keep their home as a safe haven, full of life and full of light. Every member of the family has a passion for cinema, motivating them to shoot a film inspired by their own life during a time of war. The creative process raises the question of what kind of power the magical world of cinema could have during times of disaster. How to picture war through fiction? For Hanna and the children, transforming trauma into a work of art is the ultimate way to stay human.

When poet-filmmaker Iryna Tsilyk first visited the Trofymchuk-Gladky family home, she was surprised by what she found. Kyiv-based poet and filmmaker Iryna Tsilyk is the actual director of The Earth is Blue as an Orange, although at times it seems that the older daughter of Hanna, Myroslava Trofymchuk is making the documentary. As Iryna Tsilyk observes the process of Trofymchuk and her family committing their wartime experience to camera, it’s sometimes hard to say which film is within which. As in last year’s Oscar-nominated Syrian war diary For Sama, the medium of documentary is itself under scrutiny here, serving not just as our window into the subjects’ lives but their own malleable survival strategy. Playfully self-reflexive even as it surveys the Donbass damage with grave candor, this inspired approach deservedly netted Tsilyk a directing prize at Sundance, though it’s finally a film steered by multiple creative perspectives.

In one segment of the film, young Myroslava Trofymchuk says “Everybody smile and say ‘cinema,’” to several Ukrainian soldiers, as they obligingly pose and perform for her camera, their brawny tank reduced to a prop in the rubbly, wintry background. It’s the only time we see the masculine agents of conflict in The Earth is Blue as an Orange, a documentary with its multiple lenses otherwise turned entirely on the women and children living through the War in Donbass. Under the fledgling filmmaker’s direction, however, the soldiers briefly become benevolent players in her vision of life under siege in Ukraine, where cinema sometimes feels like all she has to smile about; a momentary memory of kindness and goodwill is fashioned from the ashes of damage and trauma.

Never contextualized in the film, the title The Earth is Blue as an Orange comes from a surrealist Paul Eluard poem, and apparently refers to improbable contradictions in everyday life: States of terror, despair and familial joy commingle throughout Tsilyk’s portrait of Myroslava, her three younger siblings and their enterprising single mother Hanna as they forge collaborative art between juddering bomb blasts in their home town of Krasnohorivka, on the frontline of the war.

Having met Tsilyk at a regional youth filmmaking camp, aspiring cinematographer Myroslava was spurred to make a short film, titled 2014, about her family’s survival: That short film is a mixture of observational documentary and resourceful re-enactments of their most harrowing experiences. Tsilyk’s film in turn hovers on the border of vérité and heightened cine-essay on the medium as mirror. (Not for nothing is Dzyga Vertov’s landmark silent Man With a Movie Camera prominently excerpted here.) The more direct fly-on-the-wall footage captured by Tsilyk’s crew runs the gamut from brutally effective to spirit-lifting. We witness both the dizzy collective panic as a neighbor’s house, against a constant sonic backdrop of shrill shellfire, is bombed in the middle of the night, as well as unguarded celebration when, following a tense interview process, they learn that Myroslava has been accepted into film school.

Yet it is when the film’s natural and metatextual components overlap and disrupt each other that The Earth Is Blue as an Orange is most poignant. In one vivid, witty shot, two teenage girls struggle to compose their own graduation portrait against a war-torn city backdrop, selectively framing a moment we can see in fuller, bittersweet view. Near the beginning, meanwhile, the family’s attempts to create their own studio setup for talking-head interviews with each other are cut short by a bomb attack: Cinematic creation interrupted by cinematic reality.

Once completed, those interviews are remarkable, containing some of the most piercing, personal observations here – a key instance where the achievements of Tsilyk’s film and the family’s short become inseparable. “For me, war is emptiness,” says Myroslava, weaving the simple metaphor through depopulated cities and drained dams, while her sister Anastasia reflects self-critically on how living through the conflict has changed her: “I have become a very irritable and evil person, and if it weren’t for the war, I’d have remained the nice and kind child I used to be.” The mother Anna, in turn, wonders if, by not fleeing, she’s done the right the right thing by her children: “If everyone leaves the city, who is there to rebuild it?”

By the end, it’s clear that the short film they’ve made is their contribution to the rebuilding process. A cathartically moving sequence sees the family screen the completed 2014 to a gathering of relatives, friends and neighbors, though instead of showing us their handiwork directly, Tsilyk lifts a trick from Abbas Kiarostami’s experimental feature Shirin, grazing across the alternately rapt and distraught faces of the audience as they watch their recent struggles reflected on the screen before them. It’s an apt inversion for a documentary in which the roles of filmmaker, viewer and subject are as inextricably fused as life and art.