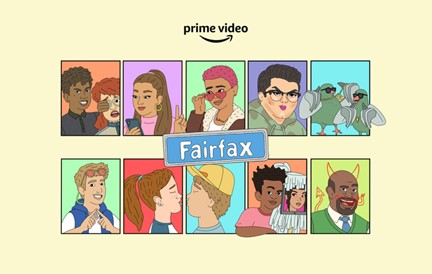 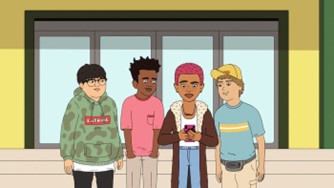 Pennsylvania (The Hollywood Times) 5/30/22- Relevant, irreverent, and hilarious, Fairfax Season Two is a satirical adventure for the jaded soul.  Navigating social faux pas in the modern world is as terrifying as a hostile AI takeover.  This adult cartoon parodies the phone-addicted lives of teenagers at Fairfax Middle School.  The gang-gang teams up for another year of ruthless cartoon comedy.  If you’re just now tuning in, the gang-gang is a group of four teenagers, Dale, Benny, Derika, and Truman, who are forever reaching for social clout.  When Dale moves to L.A.’s Fairfax Avenue, he is met with pressure to take up his phone and get his Instagram game on.  In pursuit of followers and social media fame, Dale dives into the digital party. 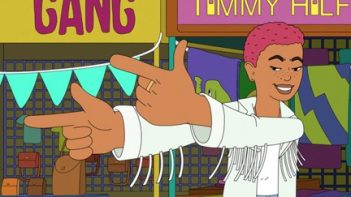 These teenagers are more attention starved than ever, and that means media stunts, gossip, and sabotage.  But it doesn’t stop there.  The show parodies anything it can get its hands on.  I can sense the clever scheming of show creators Matthew Hausfater, Aaron Buchsbaum, and Teddy Riley all over this, waiting to satirize the strangeness in the ordinary.  Truly self-aware, it points out the ironies of woke culture and the hyper vigilance of a society that can’t get anymore sensitive than it already is.  And ironically, it blends this sensitive woke dynamic with crude humor and F-bombs ablaze.  The troop might be overly concerned with helping the environment one episode but then attend a music festival of Pollution and Radiation the next.  Or exploit their tragedies for social media attention.  The scene is lit from head to toe in sarcasm. 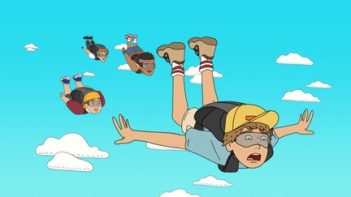 The teenagers shuffle through a series of dramatic events with the charming shallowness of children attempting to be older than they really are.  In doing so, they must imagine and reimagine their world in response to the failures of their strange logic.  Maybe the world would be a much more straightforward place without the click baits and ads, but these teenagers cannot wait to overanalyze and savor the juicy details in digital surrealism.  Take a fashion-obsessed youth and pair them with the dramatic lives of designers.  Introduce fourteen year olds to AI tech.  Contour the rotund angles of a teenage boy and watch him play with his bizarre new identity.  This is Fairfax.

This is not another woke show.  I know, cue the eye rolls.

Adults are getting sick of being treated like children in a kindergarten class, being condescended with the mushy etiquette we’re constantly being reminded of.  Is it possible that woke culture has pushed it a little too far into a caricature of itself?  And causes that were once deeply felt are now being exploited and dramatized to absurd levels for media purposes.  One can only chant for so long before the cause gets drowned out with all the other noise.  Maybe those colorful antics of activists are getting a little too colorful these days.  And maybe our tech savvy youth are getting a little too histrionic.  Strangely, Fairfax seems to make fun of it in a way that’s fair, normalizing the conversation by playfully satirizing it, and making no apology for it.  Not everyone can be a vegan feminist searching for a platform.  And not everyone can play that social media game with quite the same bravado.  But in the end, the story comes around to show that despite the ridiculousness, it’s all in good fun.  And laughing it off might be just the best remedy, after all.

In some ways, I can’t help but think of Seinfeld when I watch this series.  It makes the ordinary seem absurd and heightens it with hilarious melodrama.  Like adult cartoons The Simpsons, Family Guy, Archer, and South Park, this show enjoys being inappropriate.  I laughed through the entire second season of Fairfax, sometimes to the point of tears.  Somehow they make kombucha drinking, self-aware teenagers so ridiculously entertaining.  Fairfax touches on very real life issues that adults and teenagers can relate to.  It touches on the digital era, the clout chasing, diversity, feminism, and just about every other relevant topic of today, and it dives head on into clever comedy.  The show can seem hyperactive at moments, packing in all sorts of absurdities into 25 minute episodes.  It’s freakishly relevant to American culture, tackling it from an ironic angle.