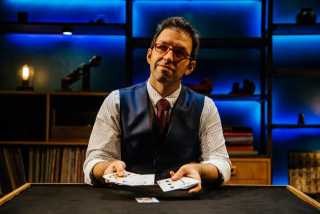 Westwood, CA – (The Hollywood Times) – 05/16/2019 – Master illusionist and storyteller – Helder Guimarães’ one-man show – Invisible Tango opened Wednesday at the Geffen Playhouse’s Audrey Skirball Kenis Theater. The Portuguese born magician’s looks are as deceiving as they are alluring. As Helder steps into view – in what appears to be a study – before the intimately arena seated audience – he looks more like the romcom guy who never gets the girl. He is dressed in a vest, matching jacket, a tie, jeans, sneakers and red glasses. Guimarães doesn’t appear to be the man of intrigue or an enigma until he opens his mouth and spreads his hands – with a deck of cards. It’s quite remarkable what a simple deck of cards can do.

“What you see is not right or wrong but always part of the whole image.”

At that moment, this philosophical and theatrical artist takes us on a mystery duet for the next 80 minutes – at times taking the lead and at other times appearing to follow. He never loses sight with his slight-of-hand as he regales us with tales of his life and seems to savor every moment with us.

This magician has a wicked sense of humor and a warmth in the way he interacts and draws you closer – wanting to know the answers of how the cards changed or how things disappear – or how he knew those numbers and suits… He can make you believe the impossible is possible if you surrender – but he’s not telling you the answers.  He wants you to question, almost demands it, because he does. He states, “Everything happens for a reason.” Then, after he gets his nods in agreement, he tilts his head and smiles quizzically, “Really? Does every thing happen for a reason?”

Every detail is designed to make this a symbiotic and evocative experience. The music (by Moby) and sound (by Alex Hawthorn) is just enough to accent the set (designed by François Pierre Couture) which is crafted to enhance the storytelling as every shelf on the wall holds something that has meaning – it becomes another character in the show. Elizabeth Harper’s subtle lighting gives us a day/night texture and feeling. This show is all about the senses we’re born with – used or not. A great reminder to reawaken them and reconnect with the kid within.

How often do we want to give up when things are a mess – like a deck of 52 pick-up cards – not being able to find order, control or ponder, what’s the point? Then ta-dah! Helder swiftly rolls chaotic lines of red/black/red/black into perfect sequence – before your eyes – informing you that it was your choice to give up, not believe or to have fun while in the midst of chaos. He didn’t give up on figuring it out.

Guimarães tells us a story of an old friend throughout the myriad of card tricks, this old clown we grow closer to and can imagine, then comes a notebook he bought that has clues to a previous owner, an accident he had – all the while guiding us, getting us to answer and participate. David Copperfield can have his enormous sets and screens that detaches the performer from the audience. The smallness of Guimarães’ setting lets us hang out with him, relate to him, let down our guards and decide what we can relate to in his personal stories and walk away with our own things to question. It’s a humorous, at times serious but a surprisingly serene inquisitive interaction that occurs. Or is it between us and ourselves? Nothing Helder does is easy as he redirects our thought process in the hopes of enlightening while entertaining. He’s the embraceable teaser on a quest.

Does everything have a meaning? You decide. Hindsight as they say is 20-20 and unfortunately the gift that comes lately but perhaps after seeing the show? Or at least during it – you will see life as a mystery and question what truth is for you. Treasure the mysteries.

It’s a mesmerizing, magical and memorable ride. It might alter your life’s path or have you recheck your core belief system. If we’re defined by the secrets the secrets we keep, we need to share more – there’s some magic in that statement.

Guimarães last amazed and charmed Geffen audiences in the smash hit Nothing to Hide, the two-man magic show that extended four times before transferring to New York and Invisible Tango has already extended to the end of June by popular demand!

Helder Guimarães has a bit of the “quiet” rock star in him. After the show, he made himself available to his audience to say “hello” and to have a picture taken with him.

No one under the age of 12 will be admitted to this production.

There is no late seating and no re-entry while the performance is in progress. 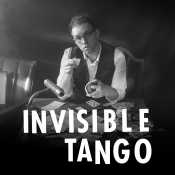