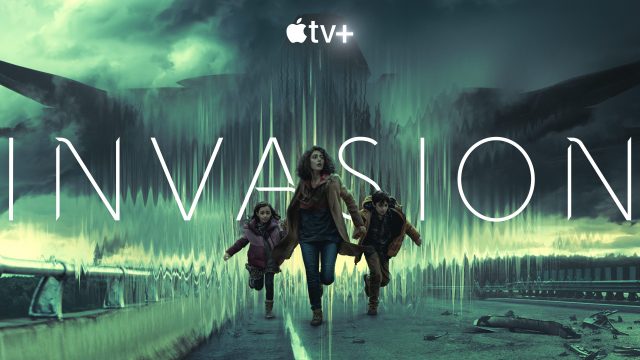 “Just when you think it was safe to go outside, comes a fantastic new and exciting sci-fi series that you will enjoy. Be patient with it. It’s a slow burner and worth the wait for all the episodes.”

This streaming series is fantastic! What a journey! It’s a cross between War of the Worlds, the Walking Dead and Alien.  Invasion is something to behold!

In its simplicity, there’s an extraterrestrial takeover happening around the world, but as you dive deeper or perhaps “listen” closer, you will find that this is more than just an epic thrill ride; “Invasion” is deeply human as you follow the global perspectives and experiences of the rural sheriff (Sam Neill “Jurassic World: Dominion,” “Peaky Blinders”) on the brink of retirement; the homesick American soldier (Shamier Anderson “Bruised,” “Awake”) stationed in the Middle East; the first-generation Syrian immigrant mother (Golshifteh Farahani “Extraction,” “Paterson,” “Body of Lies”) who’s sacrificed her career for her children and husband (Firas Nassar “Fauda”); the bullied British boy (Billy Barratt “Blinded by the Light,” “Mary Poppins Returns”) with a crush on his schoolmate; and the brilliant Japanese aerospace technician (Shioli Kutsuna “Deadpool 2,” “The Outsider”) hiding a love affair with an astronaut.

The highly ambitious series showcases stunning cinematography and captivating, emotional storylines that reveal that the characters’ lives were complex and on the precipice of change well before the aliens arrived.

Review by Pat:
What you get is a fantastic journey through the eyes of the Sam Neill, Shamier Anderson, Golshifteh Farahani, Firas Nassar, Billy Barratt and Shioli Kutsuna and how they all deal with what’s happening on Earth and above it.

I was intrigued and sucked in for the entire series. I wanted more. The beauty of the stories make you “care” about each individual. Billy Barratt’s character is bullied and when he confronts the child that’s bullying him, he finds out that he’s just as terrified hiding behind bullying everyone.

I watched as these school-aged kids are left to their own devices to climb out of a pit that their bus careened into after being nearly destroyed by a piece of satellite that came crashing to earth.

Shamier Anderson’s character, an Afghanistan war veteran that comes face to face with the aliens and one of its crafts, deals with navigating out of Afghanistan to try and get home to his estranged wife.  The people he meets along the way are part of the greater story of humanity.

Shioli Kutsuna’s character at JASA (Japanese Aeronautics and Space Administration) is key to what has happened “above” Earth and is the only one to figure it all out but, comes up against obstacle after obstacle until finally someone listens.

Sam Neill’s character, as a sheriff who’s retiring, faces a question: “What was the reason I became a sheriff?”  He struggled with that all his career until he came upon the case of the two missing boys and their mother’s truck.  It’s at that moment that he realizes, THAT is the reason he became a sheriff but his retirement and life is short-lived.

Invasion is not just another alien movie but a movie about the HUMAN CONDITION and how the invasion affects each and every one of us.  What would happen “IF” we were invaded? How would we all react in our tribalism state of play today?  All the gun-touting 2nd Amendment lovers wouldn’t know how to react, there’d be chaos, looting, theft, murder, and we’d be reduced to our primal selves in order to survive. It all comes down to Survival of the Fittest when we should concentrate on survival of the species.

The series has several messages in it and as you watch it, you’ll be drawn into the main dilemma that befalls all of us and a question that faced Sam Neill’s character. “What is the reason I was put here on this planet?”  Will we ever understand that question? Ask yourself what is your reason for being put here?  How would you react if Earth was invaded knowing that you’re whole way of life would be upturned. Think about it: Your home destroyed, way of life gone, and the basic essentials of everyday, which none of these stories, except Invasion, addresses. Are we prepared for what’s to come? Are we prepared for what’s next? Are we prepared for an INVASION?

This is a series you need to watch and boy oh boy, I can’t wait for the next season!