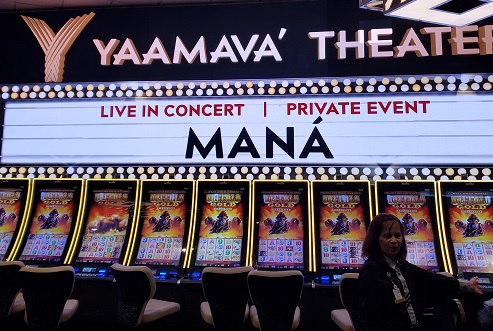 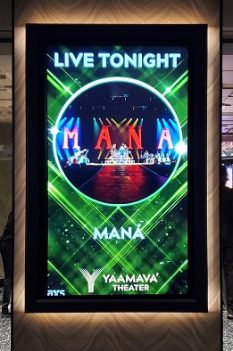 To kick off Hispanic Heritage Month, Yaamavá Resort & Casino at San Manuel brought the Grammy award-winning Spanish rock band Maná to their new Yaamavá theater this past Thursday, September 15th.  I was surprised to see so many cars in the parking structure on a Thursday night. Good to see that folks are going back to the casino.

I had not seen this band in person before and only heard about them six years ago. A co-worker used to play their music and go to their concerts. She played some of their music for me and I enjoyed it! 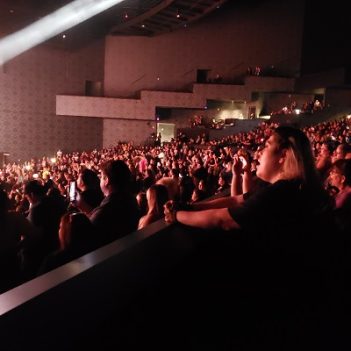 The theater was really nice and the seats where really comfortable and I have to say a little spaced out.  I will definitely being going back to this venue.

The theater was full of Maná fans who were standing the majority of the time they played, which is totally cool to see and I loved when they all sang along, that is awesome.

The lead singer Fher Olvera was ready to give his fans a great show and he did just that.  He really seemed to appreciate when his fans sang along with him and then he would stop singing and the fans didn’t miss a beat or a word.  There were all ages there to enjoy the great music and beautiful lyrics.

Each of the band members were introduced and played some solo music and the drummer, Alex González was really rocking it out.

The band’s sound draws from pop rock, progressive rock, Latin pop, calypso, reggae and ska music genres. They initially received international commercial success in Latin America and Spain and have since gained popularity and exposure in the US and around the world.

Enjoy the photos taken by The Hollywood Times:

In 2019, Mana announced in February 2019 their new tour “Rayando el sol tour” that will start in the USA in September 2019. On 12 April Maná released a new version of their classic hit Rayando el sol featuring Spanish singer Pablo Alborán as the first song from their upcoming project.

In August 2021, Billboard and Telemundo announced that Maná would be honored with the icon award at the 2021 Billboard Latin Music Awards on 23 September 2021. The announcement included that the band would also perform a remake of the classic “El Reloj Cucú” ft. 12-year-old artist Mabel at the awards show.