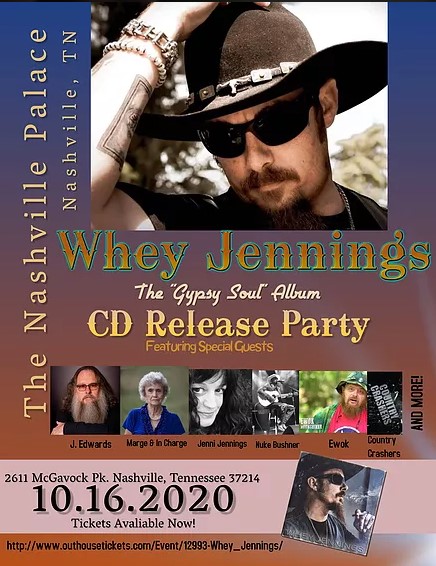 The Hollywood Times had the privilege to attend Whey’s Album Release Party and his and his new wife Taryn’s Gender Reveal Party.  Before the party and show got under way, The Hollywood Times was granted an interview with Whey Jennings. We wanted to know where he has been, what he has been up to, and some of his goals, dreams and inspirations.

Whey is the son of Terry Jennings, the eldest of Waylon’s children. He grew up in Texas.

THT: What was like growing up as part of the Jenning’s family?

Whey Jennings: Normal, completely normal. Other than traveling occasionally with my grandpa, and helping out around the set, music life, and my childhood were completely separated.  I was a normal kid and did normal kid stuff. Well until my teens years anyway, (he laughed!). But seriously, I wish I could go back and do them differently. There was a lot of partying, sex, drugs and rock n roll. They opened a bad door to years of alcohol abuse. I’ve been sober now for eight months. I thank God and Taryn for that. They changed my life.

THT:  What advice do you have for young people wanting to get into the music business?

Whey Jennings: Be prepared for the highs, the lows, doors being slammed in your face, and everyone who doesn’t see your dream or vision the way you do.  I want to encourage the young people to not do what I did. Having fun and partying all the time is nice, but it’s no way of life. Know your limits and if you get into trouble make sure you have someone to call.

THT: That was great advice. To take the best of yesterday and leave the rest behind, because the past has nothing new to say. We both agreed.

Whey Jennings: Kids today are just different. I’d love to see them graduate, get a job, fall in love, then get married and have babies. In that order.

THT: Follow your heart but take your brain with you.

Whey Jennings: Exactly, I may just steal that!

THT: Share with us your proposal to you now wife Taryn.

Whey Jennings:  My attribute and good way of life now, is thanks to Taryn. I thank the Lord every day that she came into my life and has stuck by my side. We met through my drummer and a short time later I proposed.  We were in a Cadillac driving on a country road, and I randomly said, let’s get married. She wanted me on a bended knee, (he laughs), then I surprised her later on that bended knee with the ring. It really was a special moment when she said yes.

THT: Besides Taryn, who else are you influenced by?

There was a pause.

Whey Jennings:  My dad. He supported me through the good and not so good times. I miss him, a lot”.

THT: I can relate. I lost my dad last year too.

Terry Jennings passed away on January 25, 2019. Whey was in a live recording for his album, previous to Gypsy Soul. The name of that album was Whey Jennings Live at Nashville Palace.

His last memory with his dad was, Him apologizing for not being able to attend the recording. When Whey talks about his family, his face lights up. We shared some laughs. You can definitely tell family is important to him and comes first no matter what. We both sighed, “If heaven only had a phone”.  I told him that we are blessed to have dad’s worth missing, and memories.

Some of Whey’s favorite past times were working on the farm. He loved the outdoors so much he stayed working [on the farm] for 10 years. In his spare time, he likes to go fishing and camping, and loves music around a campfire. His favorite show is Dukes of Hazard. His excitement was contagious when he talked about being invited to “Beau’s Extravaganza”. A big birthday party for the “Duke Boy” John Schneider. He also filmed part of one of his videos at Cooters Place.

THT: What is your favorite song from you new album? Which I have a copy of and can’t wait to listen to it.

Whey Jennings: Gypsy Soul (also the album’s title). Make sure you let my fans know they can get their copy everywhere music is sold. I do love the mix of traditional country and rock n roll country. 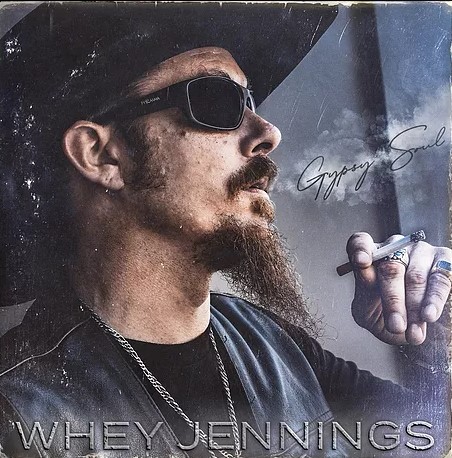 THT: How can your fans reach out to you?

Whey Jennings: My fans can connect with me on my social media sites found on my webpage. I do love interacting with my fans.  One fan asked me what my favorite food was and I said steak, taters and sweet tea and don’t be shy with the pie.

THT: I’ll have to remember that if I’m ever invited to one of your outdoor BBQ’s.

I moved the conversation to the 2nd reason for tonight’s party. The big gender reveal. He said he and Taryn wanted to be surprised along with everyone else. So they too we’re excited for the moment to come.

THT: You hoping for a boy or girl?

Whey Jennings: A baby, (we both laughed). A healthy baby with 10 fingers and 10 toes.

THT:  Have you picked out any names?

Whey Jennings: Kaitlyn Ariah for a girl and Johnny Vance for a boy. These names are a combination of special people in our lives.

The happy couple looked amazing together and Taryn looked so radiant and beautiful. Visiting with her was definitely a great memory.

Talking with Whey was like talking to my brother or a really good friend. Easy going and laid back. This stop was just one of many on his current tour. His honesty about his life before Taryn was very inspirational. He doesn’t mind sharing what he has overcome, if the purpose for telling it, helps someone else in similar situations.

As we parted ways, he was happy to have a new friend. After a few pics he was off to do a sound check with the band, and a crowd was gathering around the cake table. The big moment was just around the corner.  The color under the icing would reveal the gender of the newest addition to the Jennings family. Pink for a girl and blue for a boy.  With her hand over his, together they cut out a big slice of cake and held it up. Big smiles and cameras rolling. Pink. The newest member of the Jennings family, and Waylon Jennings Great Grandchild, would be Kaitlyn Ariah Jennings.

Only God knows what’s in store for this little girl. Will she follow in the musical footsteps of her dad and grandparents? Or steer clear of the profession completely?  We can almost guarantee her “normal” childhood will include music, bonfires, the Dukes of Hazard and I hope, at least one more trip to music city. Her adventures with her dad, I’d love to write about someday.

Whey Jennings grew up in a family full of country music royalty.  His grandfather, the legendary Waylon Jennings and grandmother Jessi Colter both had major success in the major music charts for decades. Jennings is a “rough around the edges, unpolished singer” with a voice as big as Texas.  He couldn’t go pop with a mouth full of crackers! Jennings is the oldest son of his mother Katherine and father Terry Jennings.  Whey has always had a deep love for music since the first time he stepped foot on stage.

​Whey was just a boy when, at one of his grandfather’s shows, Jessi Colter left a microphone on a chair backstage after performing “Storms Never Last”. Young Whey picked up the microphone and pranced out onto the stage and began singing “Mamma’s Don’t Let Your Babies Grow Up To Be Cowboys.” Whey’s grandpa Waylon shouted out: “Hey hold up there Hoss…wait for me!” Waylon went to pickin’ and when the song was finished, the crowd went nuts. It was on that day that Whey fell in love with music and as they say… the rest is history. 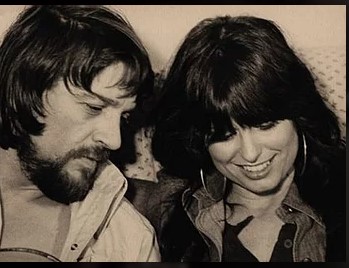 Waylon Jennings, Whey’s grandfather, was a legendary singer, songwriter, and country musician. He was pivotal to the growth in popularity that the outlaw country movement saw throughout the ’70s, and even had songs featured on the first platinum country album, “Wanted! The Outlaws” which featured Willie Nelson, Tompall Glaser, and his wife Jessi Colter.

Jessi Colter, Whey’s grandmother, was most well-known for her collaborations with Waylon, and became one of the few women to emerge from the outlaw country movement of the ’70s. After meeting Waylon, Colter released her first studio album in 1970, and would go on to sign with Capitol Records and release country-pop hit “I’m Not Lisa”.