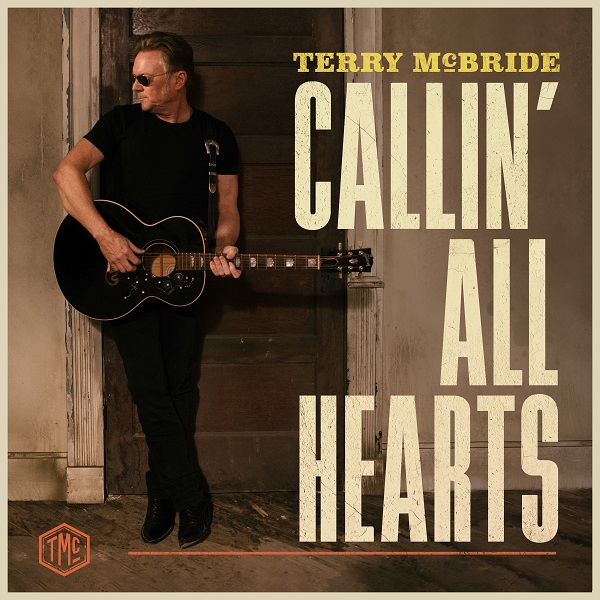 The Hollywood Times was able to catch up with Terry McBride at his hide-away place outside of Nashville to talk about this new upcoming album “Rebels & Angles.  We sure had a great time talking about it and Terry’s songwriting career.

Terry McBride has had a career spanning over four decades and his songwriting catalog consists of some of the most beloved songs in country music from Brooks & Dunn’s “Play Something Country” to Reba’s “I Keep On Lovin’ You” not to mention McBride & The Ride’s many hits through the ’90s. Terry’s new single, “Callin’ All Hearts,” is yet one more gem among his long standing repertoire and was premiered in a panoptic feature with American Songwriter. Penned alongside fellow hit songwriter and producer, Luke Laird, the single details the demise of a relationship and serves as a warning to bar-going gentlemen to be on the lookout for his 5 foot 2” baby blue-eyed, heart-breaker.

In reflection on the single, Terry said “this was the first song I wrote with my producer, Luke Laird. I feel we did a good job of capturing a 90’s country singer with a modern day contemporary production. Luke’s acoustic guitar and those catchy fiddle licks set the tone for this one.”

“When a songwriter like Terry McBride calls for one’s attention, it might be best to heed those exclamations and listen, especially if the reason in question revolves around some solid new music and a bit of advice for the relationship-troubled out there.” – Kira Grunenberg, American Songwriter

“Callin’ All Hearts” is an enticing glimpse at McBride’s upcoming album Rebels & Angels. The project was produced by Luke Laird, and the title track was co-written by Terry McBride and Chris Stapleton. The song also features a vocal appearance by the incomparable Patty Loveless. The 10-song project is set to release on October 23. You can preorder the album here.

Releasing a solo project in 2020 – Rebels and Angels

Written countless hits for for Brooks and Dunn, Garth Brooks, Reba, and George Strait among others for a total of 13 singles with Brooks and Dunn and 30 total cuts

“Play Something Country” – Brooks and Dunn

“I Keep On Loving You”  – Reba McEntire

The songs he has written have been nominated and won ACM Awards, CMA Awards, CMT Awards and GRAMMY Awards

Wrote three No. 1 singles (“If You See Her,” “Play Something Country” and “Are You With Me”) and six additional Top 10 songs with duo Brooks and Dunn

Started McBride and The Ride in the 90’s

About Terry McBride
As one of Nashville’s most established performers, Terry McBride has forged an impressive four-decade career in country music as an entertainer, songwriter and musician. Along the way he’s worked with legends like Brooks and Dunn and Delbert McClinton, written countless hit songs and participated in the country revolution in the ‘90s leading a hit-making band, yet he’s waited until now to emerge as a solo artist. His dynamic set list blends new material, familiar songs he’s written for others, and modern classics like “Sacred Ground,” the signature hit from his band McBride & the Ride. Growing up outside Austin, Texas, McBride always wanted to be in his father’s band, finally getting the coveted spot after auditioning once he graduated high school. The early ‘80s brought him to Austin where he secured a job as a bass player with Delbert McClinton. Eventually making his way to Nashville and forging a solid friendship with Ronnie Dunn, McBride is named as a co-writer on 13 of Brooks & Dunn’s singles, with an overall 25 cuts with the duo. This rich catalog includes the No. 1 smash, “Play Something Country,” as well as Brooks & Dunn’s two duets with Reba McEntire: “If You See Him/If You See Her” and “Cowgirls Don’t Cry.” He also placed songs with Garth Brooks, Easton Corbin, Josh Gracin, Cole Swindell, Gretchen Wilson and many others. In addition, McBride and Chris Stapleton co-wrote “Gonna Come Back as a Country Song”  for Alan Jackson. After nearly 20 years away from the spotlight, McBride has spent the last few years returning to center stage. Inspired by the honky-tonks and dance halls of his youth, he released an EP in 2017 titled Hotels & Highways EP and just wrapped up a new album Rebels & Angels produced by Grammy winning songwriter/producer Luke Laird. Keep up with him at terrymcbridemusic.com.