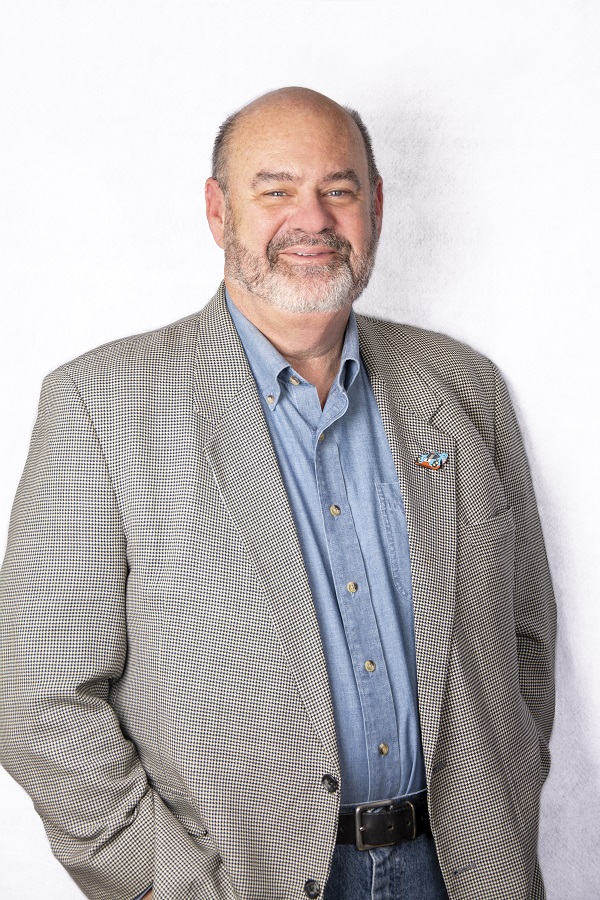 Rancho Cucamonga, California (The Hollywood Times) 12/09/2020 – “I’m pleased to say that a portion of the proceeds from the sale of my new book will benefit the Boys Republic School where Steve lived and schooled as a somewhat wayward teen, and later supported as a successful adult.” Matt Stone told The Hollywood Times during our interview.  (boysrepublic.org)

Check out our Zoom interview here:

Now in Print: BULLITT: The Cars and the People Behind Steve McQueen 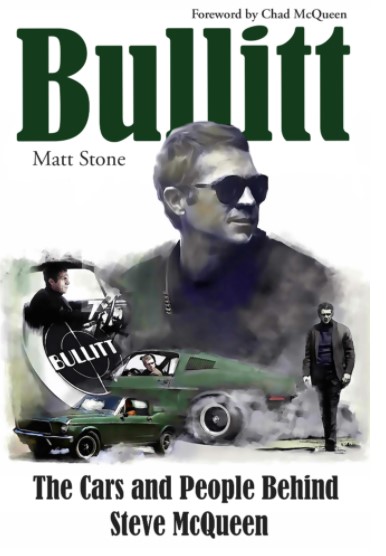 It’s all here: the super cool leading man, the Mustang and the Charger, the stunts, The City, the cast, the story, and how it all happened in San Francisco in 1968.  When the lists are made and the bets laid down, the 15 minutes of automotive action mayhem in Bullitt still rank as the defining greatest car chase ever put to film. This book covers it all, from the genesis of the film to the cars, production, crew, stunts, and flat out movie magic that make Bullitt a cult classic.  Including the coming to ground of the original movie Mustangs, the Chargers, McQueen, Bisset, Vaughn, and all the rest.  Key locations, and photos never before published.  The Ford Bullitt edition Mustangs, plus all the 50th anniversary celebrations and events.

This is truly an amazing book. The layout, the pictures that Matt was able to obtain and how he used them throughout the book. The words used to tell the story of the world’s greatest car chase scene EVER are finally in a book to enjoy for years to come! BRAVO Matt and thank you for this treasure.

I highly recommend this book to add to your collection, purchase it and put it on your living room coffee table. It will be picked up, read and a conversation will indeed follow.

With the holidays approaching, get a few copies for the Steve McQueen fan, Mustang fan, the man in your life, your dad, brother, uncle, son or even that son-in-law. Men and women will both enjoy receiving this book as a gift for the Holidays.

While several books have been published about Steve McQueen, the “King of Cool,” never before has there been a thorough examination of this specific film and these specific cars. This edition is a welcome addition to the library of any McQueen, Mustang, or automotive film history fan. 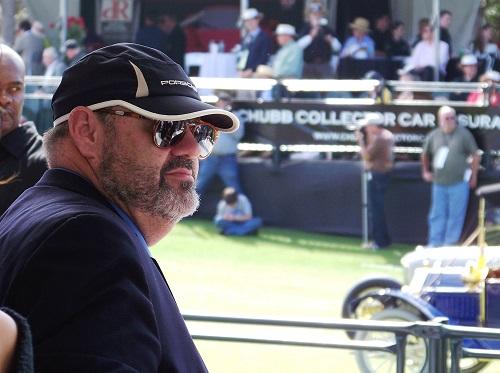 Matt Stone, automotive freelance journalist, author, photographer, broadcaster, automotive event Emcee, book author, International Concours judge, and former Editor, Motor Trend Classic magazine. He has been a professional automotive journalist/photographer since 1990. He has authored and photographed more 16 automotive book titles with more in process, and has been published in dozens of magazines worldwide. 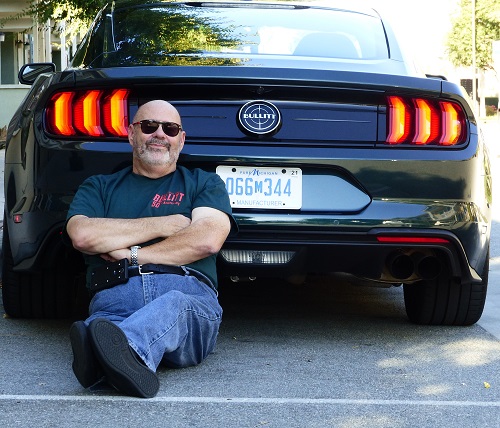 Matt enjoys nearly anything with wheels and an engine, though demonstrates a particular passion for post WWII sports, performance, sports and endurance racing cars. He serves his profession as a past Officer and Board of Director member, and past-President of the Motor Press Guild (MPG) trade association.

Editorially, Stone was in charge of advance and strategic planning for the magazine, including story selection and editor assignments. He participated in all manner of Motor Trend  activities, including road tests, special interest stories, industry news, and MT’s world-recognized Car, Truck, and Sport/Utility of the Year programs. His specialties are history, design, and interview features. Stone contributed to MotorTrend.com, and his voice was often heard on the syndicated Motor Trend Radio Network.

Stone has a Bachelor’s degree from Cal Poly Pomona, with a major in Business, and minors in Journalism and Marketing. He has authored and photographed more than a dozen automotive book titles with more in process, and for seven years was a member of SPEED/Fox Sports’ Barrett-Jackson auctions television broadcast team 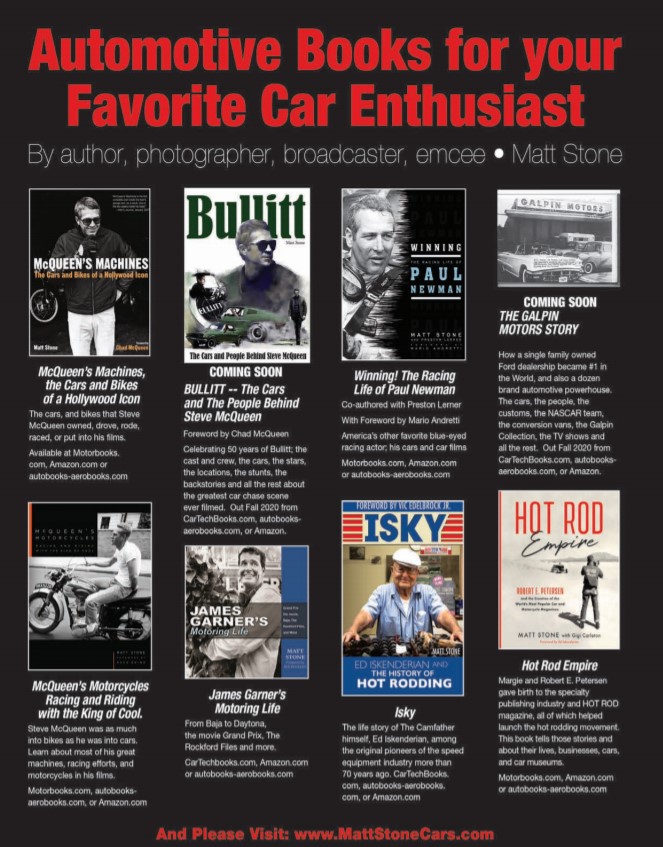 For over one hundred years, the Boys Republic in Chino Hills has served as a consistent reminder to the community, that youth, no matter how challenged, can overcome great obstacles and achieve unimagined success. No former student proved this to be true better than Steve McQueen, a 1946 alumnus of Boys Republic whose story started as a troubled youth and ended as a 20th century icon. During the height of Steve’s demanding movie career, he would visit Boys Republic often and leverage contacts, friends and movie studios to help the needs of the school. The Friends of Steve McQueen Car and Motorcycle Show exists to extend that legacy through the leadership of co-chairs Chad McQueen and Ron Harris, the creative genius of Peter Dunkel and a talented committee of dedicated and tireless volunteers.

The Friends of Steve McQueen Car Show has fast become one of Southern California’s finest automotive gatherings. Steve McQueen remains a major influence in America’s car culture, and his fans and friends from the world of racing now have an annual event where his cars, bikes and memory can be celebrated – on the grounds of the school McQueen attended during his youth, that is credited for transforming the lives of thousands of young people over the last century. Steve would have been pleased to see that his legacy was able to make a continuing difference in the lives of the Boys Republic youth he cared for so deeply.

The events of the car show are also fully reflective of Boys Republic’s values and traditions. Everything that occurs at Boys Republic will have student involvement in some form or another. The car show is no different. From preparing the grounds, to coordinating the spectator parking lot, to serving the Friday night dinner and working in countless other ways, the boys’ influence can be sensed throughout. Above, committee member, Peter Dunkel, discusses his original idea to have the students make all of the trophies by combining donated car parts with creative fabrication in the campus woodshop. Below, student judges present their proudly crafted trophy to one of the day’s winners. More than just a car show, the Friends of Steve McQueen have created an opportunity to introduce countless automotive and McQueen enthusiasts to Boys Republic and the efforts of the students to turn their lives toward a positive future.