“If you think you know Nature…Think again!”  Tagline said by Benedict Cumberbatch before and after each episode.

Los Angles, CA (The Hollywood Times) 09/23/2022 – “It is different. It is not the expected natural or wild life series and I hope people give it a chance to experience something new and keep their heart and mind open. I hope everyone checks out SUPER/NATURAL on Disney+.” Pamela Caragol told The Hollywood Times during our Zoom interview.

Executive-produced by James Cameron and narrated by Academy Award®-nominated and BAFTA Award-winning actor Benedict Cumberbatch, SUPER/NATURAL utilizes the latest scientific innovations and leading-edge filmmaking technology to reveal the secret powers and super-senses of the world’s most extraordinary animals.

I was able to meet Pamela in person at Thursday night’s Screening of Episode one of SUPER/NATURAL at the Los Angeles Natural History Museum.  Once you see episode one, you will definitely binge watch the other five.  I learned so much about all the animals featured in this episode.  Fell in love with the burrowing owls because of their size, ground animals and I really got a kick out of when they turned their heads halfway around and somewhat sideways. I got a laugh out of the audience, me included, as we turned our heads as well.  Another scene of how they eat their food whole and then one of them upchucked a large pedal! LOL!  Flying squirrels where breathtaking, lightning bugs in Mexico and how ants protect their tree from elephants and giraffes.

Here is the interview I had with Pamela Caragol about her Executive Producer role in the making of SUPER/NATURAL and new upcoming shows.  Get your earbuds or headphones out and enjoy our conversation.

The Hollywood Times was invited to join National Geographic at the Natural History Museum in Los Angeles County for a Screening Event for SUPER/NATURAL.  The Screening took place at Café Patio.  We had access to the museum’s research and collections, hands on activities, live animal encounters.

Here are photos of some of the animals featured in SUPER/NATURAL.

There were beef and vegan hot dogs provided by Earle’s, plus fresh made popcorn and cold bottled water for all the invited guest. Those hot dogs were really good and fresh popped popcorn to go along with it. The right food for an outside screening on a beautiful Los Angeles night. There was also a female DJ playing some amazing sounds for us all to enjoy during snack time.

Watch the trailer and you’ll be hooked: 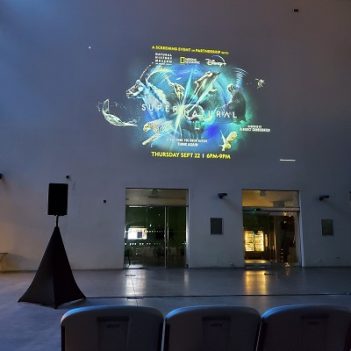 We all took our seats and the head of the Natural History Museum said a few words about the museum and how they were honored to be hosting the screening.  Up next was James Cameron from the set of Avatar in New Zealand.  He welcomed us all and told us how much it meant to him to be part of this docuseries and that Nature is not what we think it is. 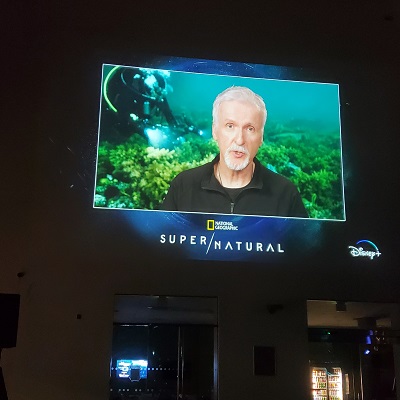 Here is list of the six episodes streaming on Disney+

Welcome to the weird and wonderful world of animal alliances, where friends are a force with which to be reckoned. Life has developed an array of unseen abilities to communicate and cooperate – glowing squirrels, snake-imitating owls and even enormous trees are among those that collaborate to find food, escape their enemies and produce the next generation.

Animals go to extraordinary lengths to secure the survival of their bloodlines. In the face of predators, famine and climatic extremes they’ve evolved mysterious abilities to protect and provide for their young. River turtles join forces to predict the future; amphibians poison their young in the name of love; and a mother elephant introduces her calf to the family while it’s still in the womb.

Predators and prey are in an evolutionary arms race. Hunters use surprising super-skills to catch a meal; while the hunted must use seemingly magical forces to escape and survive. Extraordinary footage of previously unseen behaviors reveals how unexpected powers are employed to win in nature’s most exhilarating hunts.

In a fiercely competitive world, animals face their enemies in the fight for food, family and home – employing hidden skills and extraordinary powers to win. Fearsome fish duel with ultraviolet weapons; cunning birds use incredible imitation to deceive their rivals; and lovable insects unveil their superpower in the heat of battle.

The drive to reproduce is life’s most powerful instinct. We span the globe to reveal the hidden forces that animals and plants have harnessed to find, seduce and even kill for a mate, from super sensitive elephant seals that detect their love rivals through the sand to vampiric jumping spiders with a lust for blood. If you think love is blind, you aren’t looking in the right place.

The animal kingdom is always on the move. Whether searching for food or striking out into faraway lands, looking for new beginnings or taking the first steps into adulthood, our heroes must survive impossible journeys however dangerous or daunting. We discover how animals rely on an incredible array of super-senses to overcome unimaginable odds.

I have now had the opportunity to watch all of the above mentioned episodes. First off, I can’t image anyone other than Benedict Cumberbatch narrating this series.  He adds so much to each episode with his voice and how his voice changes when it is needed for that very second of the scene. BRAVO!

I took a screen shot of my tv to capture Pamela’s name. 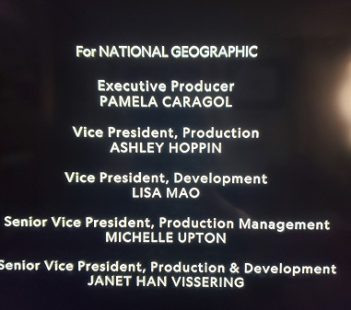 I must also say that, if you have to take your attention off the screen you are watching this amazing show on, you must hit PAUSE so that you do not miss a second of the episode.  You can’t afford to miss a second to appreciate the beautiful and spectacular cinematography  I had my favorites in each episode, from the barrowing owls, the Anole lizard breathing underwater, Orcas, warthogs and mongoose, the elephant seals and the Ibex goats in the Italian alps who scale a near vertical dam as high as the Golden State Bridge to get salt that pours from it’s wall and they risk everything to get it, truly unbelievable. Watching a baby one with it’s mother was breath stopping. You will find yourself watching these episodes a couple of times for sure.  So gather the whole entire family to watch this new animal docuseries on Disney+ now streaming.  You all will learn so much and see things you can’t even imagine to be true.