California resident Paul Bonsignore won the best writer for a feature film award at the Standalone Film Festival. This unique Festival was for independent filmmakers only, it was worldwide.  No borders, all languages and genres accepted. Hundreds of films were submitted and only the nominees and their movies were played at the TCL Chinese Theater in Hollywood. One of the greatest honors that all filmmakers dream of.

Paul, whose movie is called Prospectors The Forgiven, a western so just getting in let alone winning an award was a great victory for California as well as those people who still love cowboy movies.

The award show held August 12th also at the theater had people from all over the world as far away as Chile and Dubai attending. There were fashion shows and singers performing between announcing the winners. The red carpet was filled with  people from every walk of life. It was amazing to see, usually this kind of size is reserved for the big Studios. Independent movies are climbing up the ladder and there’s a lot of good people who want to tell their story. Now here is an outlet. This festival was large and also streamed live many of the happenings to over 80 countries. It will only get larger in the future. Congratulations Paul, congratulations California well done.

Mr. Bonsignore usually helps people with their films and making their dreams come true but this writer director has had a full life and has stories to tell maybe we’ll see more of him in the future now that he’s been put in the spotlight.

A reality became a fantasy that became reality.

It began when one of the actors (William “Frank” Painter) urged the director for the movie Prospectors The Forgiven to enter a film festival.  Paul Bonsignore who also wrote the 1hr and 30min feature was reluctant but seeing that his distributor had just gone bankrupt why not.

The movie got excepted to the Wild Bunch film festival. It was held in Arizona at the Historic Willcox Theater. 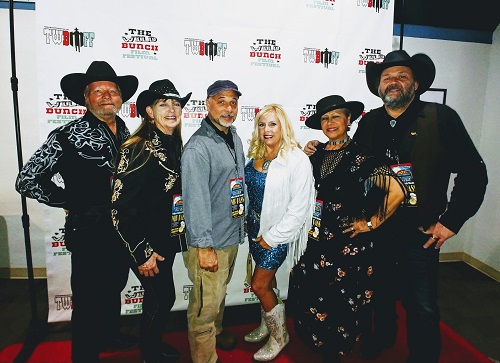 Something magical happened that night. Prospectors the Forgiven on the big screen looked and sounded great. Paul had people coming up to him saying the movie was amazing, the civil war scenes alone were equal or surpassed any they had ever seen.  Some of the characters could have spin off TV shows they were so interesting.

Frank won an award for best supporting actor. He beat out some house hold named actors for his trophy, a huge accomplishment. He plays Jacob in the feature, a man trying to change his ways post civil war in a town that’s corrupt and belonging to a family involved in most of the crime in the area.

Prospectors The Forgiven has now almost reached cult statist as far as festivals go. Here is why it is so prefect for festivals. 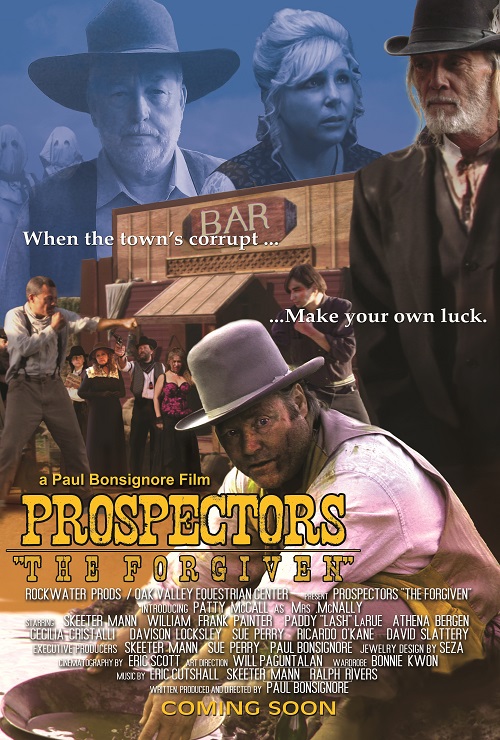 It is a western drama but has action as well. The visual is stunning compared to most films because it is a period piece. While most films are contemporary and take place in front of a coffee shop or on a couch, Prospectors The Foregiven  has horses, unique sets, award winning costumes and original characters that have flaws. Not cookie cut super men with endless bullets in their gun or women who can beat-up five tough guys at once. It’s all a very real fantasy. You can imagine these people did exist and behaved the way they did. You feel good after seeing the movie.

Emmy award winner in sound Eric Scott oversaw what you hear and also served as director of photography so sound and picture came out immaculate, this allows the audience to not get distracted while watching .

The music also has a real feel to it, so much so that Skeeter Mann won Best Music score in the Cowpokes Int’l film festival 2021. Skeeter also Plays Charlie X  basically playing the comedy relief. Charlie X has a heart of gold but is a walking calamity.

As the Prospectors ride to the top continued this underdog begin to pull away from the pack winning awards in every  category.  First you are put in concertation hopefully, then you are selected, this is very hard for features because they can show a lot of shorts to bring in bigger crowds. Once you get selected if your lucky you get to be a finalist which could lead to being nominated then win from there.

Paul Bonsignore winning best writer for a feature film at the Standalone Film festival at the TCL Chinese Theater in Hollywood became a reality.