Rancho Cucamonga, California (The Hollywood Times) 10/18/2020 – “All my greatest gifts have come wrapped in ribbons of pain.” A quote Aimee said was her favorite line in her new upcoming book Talking to the Sky.

The Hollywood Times caught up with Aimee to talk about songwriting and her new upcoming book Talking to the Sky.

Talking to the Sky is Mayo’s first book, 13 years in the making. 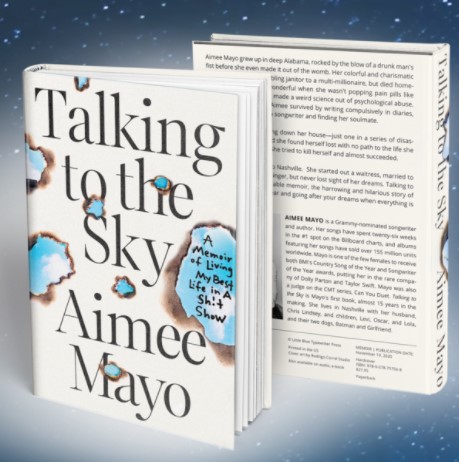 Aimee Mayo grew up in Gadsden, Alabama. According to her mother, Aimee always had a notebook with her and was constantly writing poetry. Her mother encouraged her to “shoot for the top” and she was signed as a songwriter with BMG while still a teenager. It was there that she met her husband, Chris Lindsey, with whom she has three children and resides in Nashville, Tennessee.

Throughout Aimee’s nomadic childhood, she never lived anywhere for long. She bounced between her grandparents’ homes in Gadsden, Alabama, and changed schools eleven times before fourth grade.

Aimee wrote her first song at the age of 8 with her father, Danny Mayo, a few months after her parent’s divorce. According to her mother, Aimee always had a notebook with her and was obsessed with writing poetry.

As a teen, Aimee was surrounded by music. Her late father wrote hits for numerous country artists. Her brother Cory Mayo went on to write “You’ll Be There,” a hit for George Strait.

Amazed, recorded by Lonestar that same year, is her most popular song to date. In 2004 it garnered an 8 Million Plays award from BMI, vaulting it into the top 125 songs in the BMI catalog out of 6.5 million works. Amazed also won ACM (Academy of Country Music) Song of the Year, NSAI Song of the Year, and crossed over to the pop charts and spent two weeks at the top of the Hot 100.

Mayo’s song “This One’s for the Girls,” recorded by Martina McBride, went on to be a theme song for the morning show “The View.” Aimee was also a judge on the TV show, “Can You Duet.”

A Grammy-nominated songwriter and author. Her songs have spent twenty-six weeks in the #1 spot on the Billboard charts, and albums featuring her songs have sold over 155 million unites worldwide.  Mayo is one of the few females to receive both BMI’s Country Song of the Year and Songwriter of the Year awards, putting her in the rare company of Dolly Parton and Taylor Swift.  Mayo was also a judge on the CMT series, Can You Duet.  Talking to the Sky is Mayo’s first book, almost 15 years in the making. She lives in Nashville with her husband, Chris Lindsey, and children, Levi, Oscar and Lola, and their two dogs, Batman and Girlfriend.