Rancho Cucamonga, California (The Hollywood Times) 02/11/2021 – “I started watching American Idol with my Mom when I was 2, I believe in 2002, it was when Kelly Clarkson won.” Anilee List told The Hollywood Times during a telephone conversation.

Anilee List from Los Angeles, will be featured in the February 14th premiere episode of “American Idol” as she auditions in front of the all-star judging panel, Luke Bryan, Katy Perry and Lionel Richie! Please share this news with your friends and family so they can tune-in and cheer on their local “Idol” hopeful. I can’t wait to watch. Huge fan of American Idol!

Get ready for “American Idol” and enjoy our conversation:

Originally from Los Angeles, Anilee List is currently a sophomore at Berklee College of Music in Boston. She was named a 2018 U.S. Presidential Scholar in the Arts and a 2017 Youngarts Finalist. Anilee is accomplished in a variety of styles, with an extensive background in vocal training, which has taken her to venues like the Hollywood Bowl, Kennedy Center, Lincoln Center, and Carnegie Hall.

Currently, she performs with the critically acclaimed Berklee A Cappella group, Pitch Slapped, which has gained recognition from Jessie J, Clark Beckham, and the likes of Beyoncé. For years, Anilee has trained in A Cappella under the direction of Avi Kaplan, Ben Bram, and Robert Dietz. 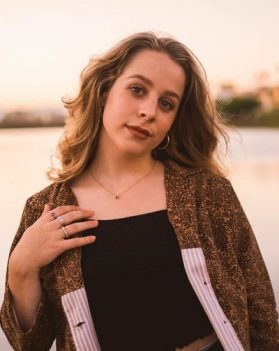 A working singer, Anilee can be found collaborating with other artists and singing at events regularly throughout the country. She is excited to be releasing new music in 2021.

The Hollywood Times wishes Anilee List the best of luck. She has the voice to go all the way to the finals.

“American Idol,” the iconic series that revolutionized the television landscape by pioneering the music competition genre, will return to airwaves for another season on ABC. Helping determine who America will ultimately vote for to become the next singing sensation are music industry forces and superstar judges Luke Bryan, Katy Perry and Lionel Richie. Emmy® Award-winning host and producer Ryan Seacrest will return to the beloved competition series as host, and radio and TV personality Bobby Bones is set to return as in-house mentor.

During its third season on ABC, “American Idol” was Sunday’s No. 1 broadcast show among Adults 18-49. The series was also the most social TV series on the broadcast networks last season with 27.1 million total social interactions.