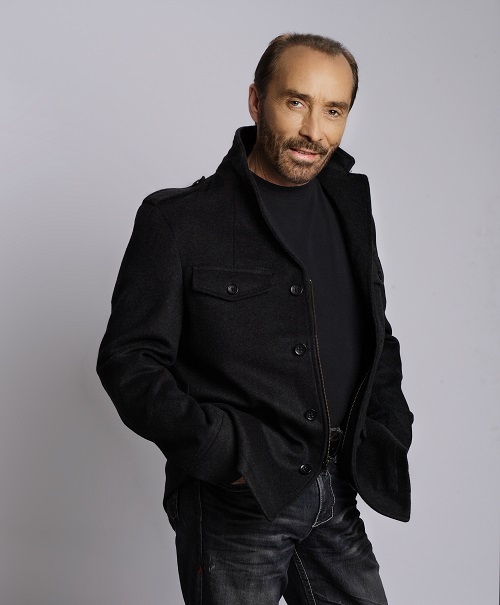 It was a honor and pleasure to able to have a Q&A with Lee Greenwood.  I hope you enjoy the interview and please listen to the whole thing, because Mr. Greenwood has amazing answers to the questions asked of him.

Make sure you listen to Lee Greenwood’s part about being at the Reagan library opening.  The story will bring tears to your eyes.  How he got all the Presidents to stand up, starting with President Reagan first as the other President’s in attendance stood after he did and the jets flew over.

Listen to our conversation here:

Throughout his expansive career, international country music icon Lee Greenwood has earned multiple CMA and ACM Awards, a Grammy Award for Top Male Vocal Performance, and a multitude of other prestigious award nominations. Now, in 2020, recordings that have been previously unavailable on any digital platform will soon be released through a new recording and distribution agreement with Time Life, which is distributed through Warner Music Group.

Lee’s ‘Same River, Different Bridge’ and ‘Have Yourself A Merry Little Christmas’ was released digitally to all platforms on October 2, 2020 for the first time ever. Fans of all ages will now have the opportunity to stream the classic hits that shaped American music. 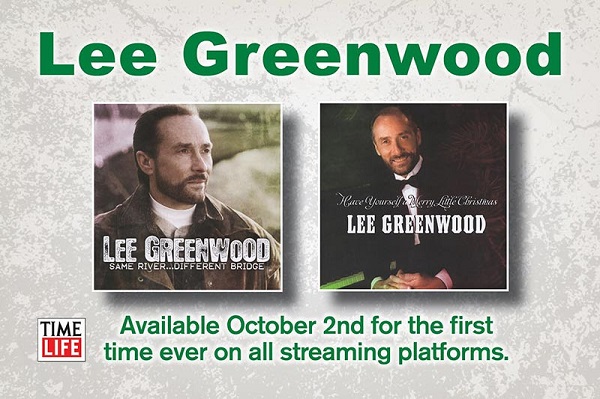 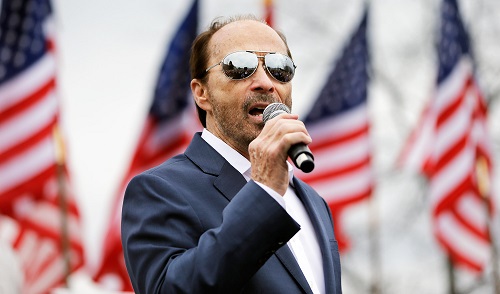 Music has always been a part of Lee Greenwood’s life. He started playing the piano when he was seven and the saxophone at 12. In junior high, he started his first group called the Moonbeams. His sister Patricia was the piano player in the band. By the time, he finished High School he played most all the instruments in the orchestra and was the Drum Major for the marching band.

Greenwood was born in Los Angeles California & finished high school in Sacramento in June 1960. He passed on track & music scholarships to the College of the Pacific along with a professional baseball career to pursue his passion for music. He also elected to skip his high school graduation ceremony to begin work at the Golden Hotel & Casino in Reno Nevada with his own band, the “Apollos”. That turned out to be a great choice.

The California native was discovered in 1979 by Larry McFaden, who saw him performing in a show at the Nugget Casino in Sparks, Nevada. Larry was the bass player and bandleader for Mel Tillis. He brought the singer to Nashville and got him signed to the Halsey Agency, who booked The Oak Ridge Boys. He began working with producer Jerry Crutchfield who would record with Lee for the next 20 years.

“Choosing songs to record is always exciting,” says Greenwood. “I’m a songwriter as well and I love lyrics that have depth and emotion. I’m thankful for the many writers & artists who have contributed to my career”.

With seven #1 songs & 25 charted singles to his credit, choosing songs proved to be a success for Greenwood. His country hits include: “It Turns Me Inside Out”, “Ring On Her Finger Time On Her Hands”, ”She’s Lying”, “I Don’t Mind the Thorns If You’re The Rose”, “Dixie Road”, “Somebody’s Gonna Love You”, “Going Going Gone”, “You Got A Good Love Comin”, “Fools Gold”, and “Mornin Ride” while he already garnered several crossover hits such as “Touch & Go Crazy”, “IOU” and the duet with Barbara Mandrell, “To Me”.

“God Bless the USA” went far beyond what Greenwood expected when he wrote it in the back of his tour bus in 1983. The song has been in the top five on the country singles charts three times (1991, 2001 and 2003), giving it the distinction of being the only song in any genre of music to achieve that feat. It was also #1 on the pop charts after 9/11/01. In addition, CBS News voted “God Bless The U.S.A.” the most recognizable patriotic song in America.

In 1995, Greenwood took a break from his touring schedule to spend time with just his children and his wife. In his time off, he elected to build a theater in Sevierville, Tennessee, and in April 1996, the Lee Greenwood Theater opened its doors. This gave Greenwood the opportunity to perform daily shows, in addition to being with his family. The theater operated for five seasons, and closed for Greenwood to continue touring. The former theater building is host to a church.

In 2011, Beyoncé offered her version of “God Bless the U.S.A.” as a download, with the proceeds going to the 9/11 firefighters fund in NYC. It has been performed by contestants on “American Idol” twice & was the winning song in the 2011 “Dancing with the Stars” competition on ABC. It is performed at all military and patriotic events throughout the year all across America. “USA” has also been in several movies and is now part of the film shown by The Department of Homeland Security when new citizens are sworn in to the United States.

Greenwood says; “USA is the song I always felt the need to write. I wanted to have something that would unite Americans from coast to coast and to instill pride back in the United States. The song represents my family, my community and those men and women who have paid the price for the freedoms we all love and enjoy.”

President George W. Bush appointed Greenwood to serve on the National Endowment of the Arts Council and his appointment was U.S. Senate approved. That Presidential Appointment continued under President Obama and still continues under President Trump.

In 2012, Greenwood released a children’s illustrated book, “Does God Still Bless the U.S.A.,” and ranked #1 on many of the notable Best Sellers Lists. It features a 30 day calendar, “Prayers of a Patriot” and includes two songs, written by Greenwood, free for download in the back of the book. One is a new version of “God Bless the U.S.A.,” and the other is a Praise & Worship song, “Show Me The Way”.

His latest book release is a children’s book called Proud To Be An American, which is currently available in stores, on Amazon and leegreenwood.com. 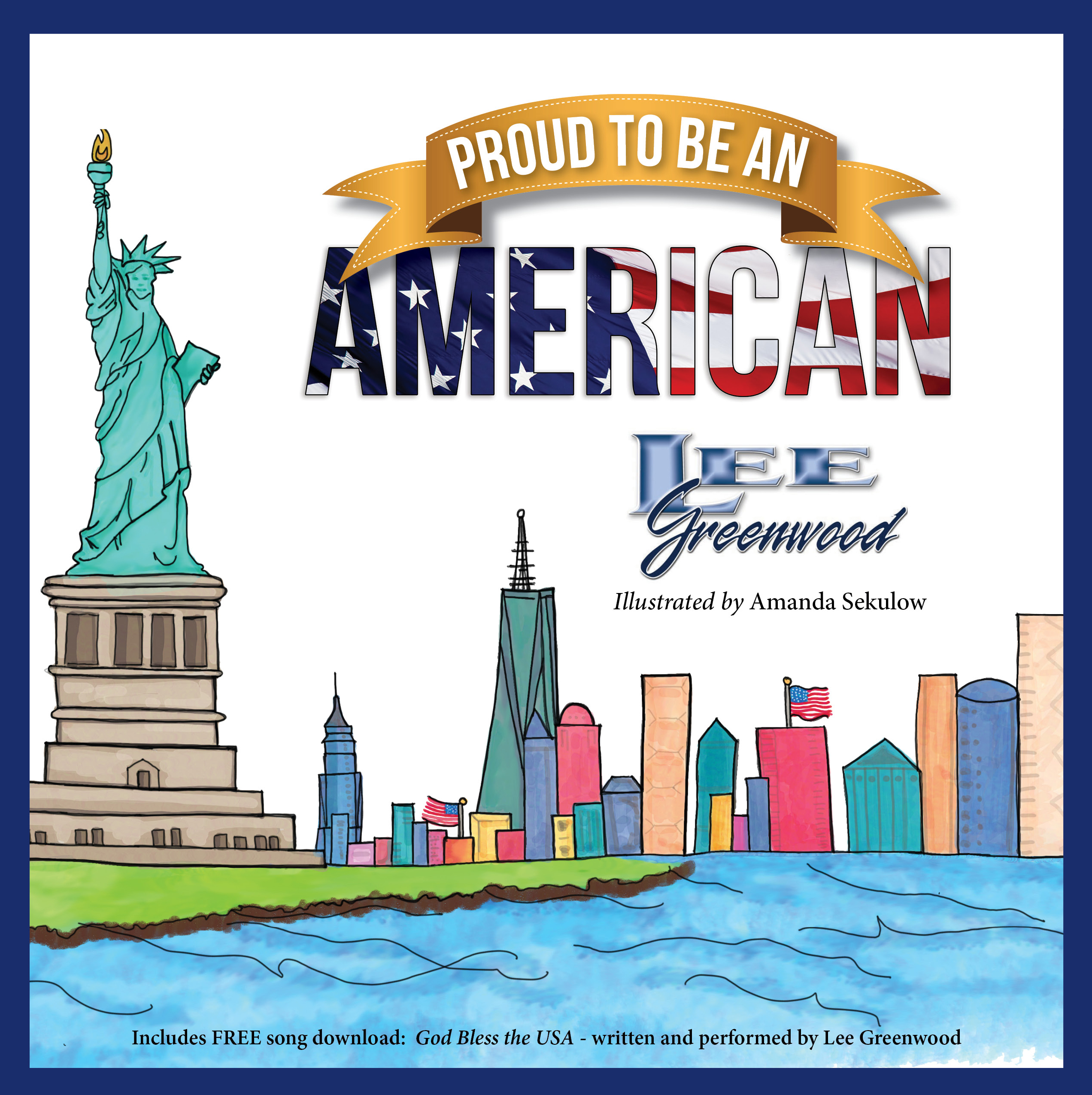 Lee and his wife, Kimberly, a former Miss Tennessee USA, fell in love on his 1989 USO/DOD tour. They were married in Nashville in 1992 and have two sons together, Dalton, who is a BioChem Major and a singer and Parker, who is a also a singer.

About Helping A Hero

Helping a Hero is a 501(c)(3) non profit, non-partisan organization, founded in 2006, that provides support for military personnel severely injured in the war on terror. Our principal activity is to provide specially adapted homes for qualifying service members through partnerships made with the builders, developers, communities, and the veteran. Helping a Hero strives to engage the community in providing services and resources for our wounded heroes and their families. Additionally, Helping a Hero provides additional support programs such as marriage retreats, caregiver retreats, recreational activities, emotional support, and financial support.

Empowering our severely wounded veterans returning from service in the War on Terror, primarily by partnering with the wounded hero to provide specially adapted homes to reintegrate them into their community.