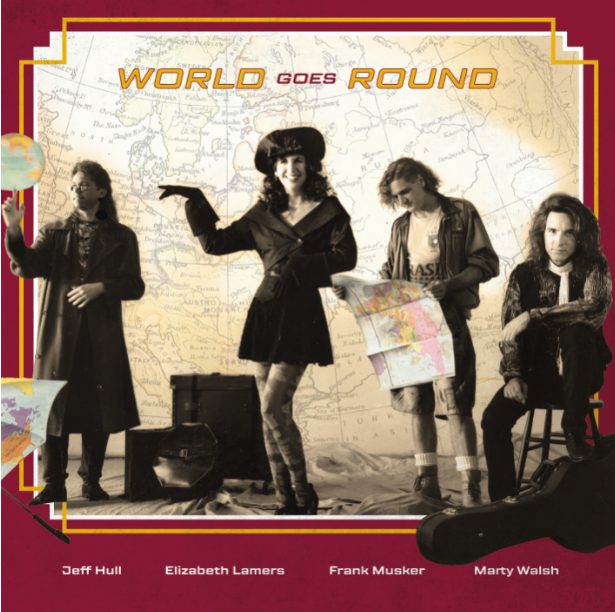 It was a pleasure to have had the opportunity to interview the band “World Goes Round” a few months ago, with two members on one zoom call and then the other two members a few weeks later.

WELL, this time, I had the opportunity to catch up with all four band members, Frank Musker, Elizabeth Lamers, Jeff Hull and Marty Walsh on one Zoom call at the same time! I was so surprised to have multi Grammy Award and Emmy Award winning producer Tommy Vicari join us too.

What a conversation we had, so much so, that there are two videos to enjoy.

Grab your headphones/earbuds, your favorite bevy and enjoy the Conversation with Judy and the band World Goes Round and their producer Tommy Vicari:

My Zoom ran out of time, so I had to start another session with the gang, and they were all troopers and hung on and started up the conversation with part 2.  Thank you all very much! Enjoy.

Part 2: (Frank talks about the video “Put It On The Line” a MUST WATCH VIDEO)

Musker (co-lead vocals), Lamers (co-lead vocals), Hull (keyboards/drums/bass guitar) and Walsh (guitar) first formed in 1989 to record an album that was never released until Walsh recently found an old cassette of the recordings and contacted their original producer, Vicari (Prince, Barbra Streisand, Billy Idol, Academy Awards, The Emmys), who remastered it and Viper Records released it. 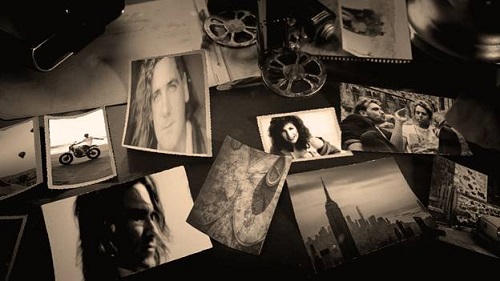 Says Musker, “It’s amazing to me that not only is this music finally being heard after all this time, but that it sounds so relevant to the momentous times we’re living in even though the songs were written 30 years ago.  It’s very gratifying to be able to finish what we started and even more satisfying that people are reacting so positively to our music.”  Echoes Hull: “We’ve all worked on a lot of great songs that haven’t seen the light of day until now.  I’m pleased there’s excitement around this album, and that it’s finally out there getting heard.”

The album was recorded at Musker’s Laurel Canyon studio in Los Angeles, where the group created powerful pop tunes, matching their creative and musical aspirations – to make a record that was musically inspired by their heroes. Their mission was to make socially conscious music, and although recorded in the 80s, the band feels that their messages resonate now more than ever.

Their single, “Put It On The Line”, is dedicated to today’s heroes.  Says Musker, “It’s a song about overcoming fear and self doubt – emotions common to every single one of us. It is dedicated to all the ordinary every day heroes everywhere who put themselves on the line and in harm’s way each and every day for us – the ones who just turn up come what may and do their duty whatever the cost.  It’s for the nurses, the doctors, the health workers, the firemen, the soldiers and to all those who daily overcome resistance and their own perceived limitations. There are no limits to heroism and to what one can achieve.”

“Watch this video, share this video (“Put It On The Line”) and it will inspire you to be your own hero. Make a difference in this life you have, recycle, don’t litter, don’t waste energy, use SOLAR, teach your children and grandchildren how to take care of our Earth! We especially all need to be nice to one another, put a smile on your face and just say hello to everyone that crosses your path. It only takes each of us to make a difference.  It is amazing how this song was written back in the late 80’s and after all these years, here it is 2021 and the world STILL needs to be fixed and this song brings light to that fact.” Judy Shields, The Hollywood Times

“What a treat it has been to reconnect with these wonderful, talented players,” says Lamers. “If there is a silver lining to the lockdown it is that we had the time to revisit this project we started so long ago. It’s been an amazing journey!”

Echoes Walsh, “It is quite amazing and gratifying that this work we did back then, and put our heart and souls into, is being released. We are finally letting the world in on World Goes Round!”

Order your special edition vinyl for yourself and get a couple of copies for an upcoming holiday gift.  The album would make a great gift, along with a new retro looking record player, to bring back the world as we knew it, the vinyl record world, that is!  The songs are truly priceless and have meaning for today’s times even after all these years waiting on a cassette tape stored away to have been recorded on a CD and album for the world to experience NOW.

has had several wide-ranging careers in music in songwriting, voiceovers and background singing. She has sung on countless commercials and is a busy voiceover artist, working in film and television and supplying voices to many Warner Brothers cartoons including Steven Spielberg’s Animaniacs, Histeria, Bugs Bunny and Daffy Duck.  As a background singer, Lamers has toured with Linda Ronstadt, Nelson Riddle and his orchestra, John Denver, Christopher Cross, Cab Calloway, K.D. Lang and the Gypsy Kings, among others.  As a songwriter, Lamers collaborated with Frank Musker, and during that time, composed “Too Much Love Will Kill You” with Musker and Queen’s lead guitarist Brian May.

Jeff Hull is a prolific producer/composer/arranger/musician and engineer who has written and or produced a number of songs, including the original “Piano in the Dark,” a Grammy Nominated song for “Song of the Year,” and also BMI’s most performed song of the year. His hit for Flo Rida in a re-worked rendition of “Piano in the Dark” went to #1 on the Billboard rap charts. He also put out a solo project called Beatnik eVolution on the EP  E-CLEKTRONICA, which one of the tracks, “the Alamrmist” was nominated for best electronic track of the year. In addition to being a staff writer at E.M.I. for three years, Hull has also written and arranged for a long line of artists from Brenda Russell and Chaka Kahn to Heart and Suzanna Hoffs. Other work includes a track on the Lilith Fair record featuring Holly Cole, main title for the feature film “Molly“ (MGM) starring  Elizabeth Shue;  “Rush of Ushers” with then partner “Daniel O’Brien”.  He has also composed and arranged songs for Beatnik eVolution, Arnold McCuller, Brenda Russell, Chaka Kahn, Molly (MGM), Karyn White, Hope Floats, Holly Cole, Jane Weidlen, Wendy Moten, Jenifer Rush, The Cores, Heart, Chynna Phillips, Tom Jones, Brian May (Queen), Desiree’, 5 Starr, Rick Nowels, Lauren Wood, Suzanna Hoffs, Bobby Caldwell, Thelma Houston, Julio Iglesias, and more.

Guitarist Marty Walsh is an assistant professor in the Ensemble and Music Production departments at Berklee College of Music in Boston, MA.  He was a guitarist on hits “9 to 5” by Dolly Parton, “She Works Hard For The Money” by Donna Summer, and “Heartlight” by Neil Diamond, to name a few. He has also recorded with John Denver, Eddie Money, Kenny Rogers, Sheena Easton, LeAnn Rimes and Julio Iglesias, among others.  Walsh did the guitar work on the Supertramp album “Brother Where You Bound”;  then toured with the band in 1985-86, and again in 1988 after playing on their release “Free As A Bird.”  Also in 1986, Walsh was a member of John Fogerty’s touring band for his first tour post CCR.  In the 1990s, he was a part of the live band on the Nickelodeon television show “Roundhouse.”

Multi­-Emmy and Grammy Award recipient, Tommy Vicari, is internationally recognized as one of Hollywood’s finest recording engineers and music mixers. He has recorded music for:  Prince, Billy Preston, George Duke, Jeffrey Osborne, Philip Bailey, Quincy Jones, Barbra Streisand, Sammy Nestico and Gordon Goodwin’s Big Phat Band.  His tv credits include: The Oscars, Six Feet Under, The Newsroom, Angels in America. His mix for HBO’s Behind the Candelabra earned him both an Emmy and a Cinema Audio Society Award.  Vicari’s work on feature films includes the Brian DiPalma cult classic, Phantom of the Paradise, to the Pixar multi ­Academy Award™ winning classics, Finding Nemo and Wall-­E. Along with Thomas Newman, Vicari worked on Road to Perdition, Cinderella Man, A Series Of Unfortunate Events, Saving Mr. Banks, Bridge of Spies, The Highwaymen, and many more.  With composer Nicholas Britell, Vicari worked on The Big Short and the HBO series Succession, Academy Award winning Moonlight and If Beal Street Could Talk, and the Netflix feature, The King.

For more information about WORLD GOES ROUND, please visit:  worldgoesround.info.