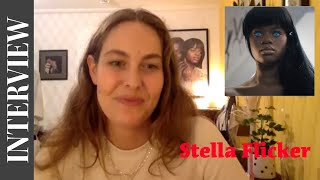 Los Angeles, CA (The Hollywood Times) 11/30/2021–In her Germany-based, thesis film, science fiction movie short, I AM, which has just won the HBOmax Best Short Film Award at the St. Martha’s Vineyard African American Film Festival, Austrian film producer Stella Flicker portrays a Black female-led drama that brings questions to light surrounding the public discourse on robot ethics. Stella has devoted her creative work to uncovering political and social disparities and inequalities and bringing them to a wider audience. Directed by Jerry Hoffmann and written by Florens Huhn, the evocative, bold camera work by Lena Katharina Krause depicts a withdrawn woman, Noé, who lives alone in the woods, where she finds a motionless android while walking in the forest one day. Noé takes the android, who is a Black female like her, home, and reactivates it. 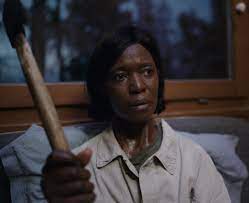 It’s the beginning of a strange relationship. Far too late, Noé realizes that the android is attempting to copy her personality, as well as her appearance and mannerisms.

In my interview with Flicker and Hoffmann, when asked what the most difficult part of the production was, they laughed, and Hoffmann said, “I don’t know what I would have done without Stella, I’m proud of all of us and also relieved” and then, from both of them, “Where do we start? We shot I AM during a pandemic, this alone left us with some struggle, trying to make sure the ever-changing hygiene and safety protocols [were] implemented in our plans and so on. Finding the house in the film during that particular time, when traveling wasn‘t possible for most Germans, making it popular to rent houses within the country, made it hard for us to find a location to shoot. We got very lucky! Also, working with intense VFX (Visual Effects) and complex postproduction for the first time…well, there was a lot that forced us to grow, and now we are even more proud to have overcome all of the hurdles, to have worked hard for it, and learned so much on the way.”

When questioned about how the topic of artificial intelligence ethics affected them personally, they answered, “Artificial intelligence interested us all as a team, and so we had lots of discussions about robot ethics, our own fears or expectations for the future of AI, and our common anger about the sexism and lack of diverse robot physiques and shapes. We constantly asked ourselves what kind of story we wanted to put out there, and how we are adding to a conversion that is more important than ever. 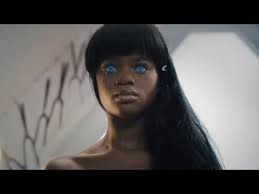 There are many topics within I AM that we are personally connected with. Having two female leads and two very different role models who are both working on their inner development and emancipation was something very inspiring to work on. Luckily there is a lot of movement and awareness-raising in the film industry, kicking off new conversations and new moving images. With I AM we are trying to add to a brighter (film) future.

In the way of how the underlying themes and philosophical questions posed in I AM are representative of society as a whole, their answer was, “I AM circles around human feelings, dreams, and desires. Something so universal, timeless, and yet mystical, that we might never grasp it completely. There are many questions asked in I AM and there might not be all [of the] answers yet. One of the ethical questions the movie asks is: ‘How can something seemingly‚ “other” become familiar? What am I afraid of? And this can translate into all present issues where minorities ask for equity and representation.” 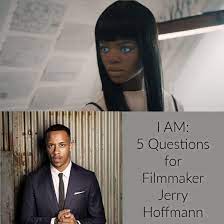 In the movie, the woman and the android form a bond, and even dance together, but then Noé finds that she doesn’t like that the robot is trying to copy her every move, and there’s a tense interlude where Noé considers destroying the android, Ela. But Ela turns and sees her with an ax in her hands, and says, “You don’t need to be afraid. I like you,” showing that she was capable of the very human emotion empathy, which was startling to me because it revealed sentience to the robot that was unexpected.

When I wondered about this, Hoffmann says that part of our humanity is our empathy towards other beings, which is very true, and we’ve certainly come a long way from R2D2. These androids that are made today seem to be able to think independently and make decisions, which seems a little terrifying. Of this, Hoffmann stated that we are late to the conversation when it comes to the ethics surrounding artificial intelligence. 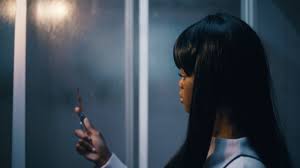 About whether Hoffmann struggles with the ethics of AI and humans, he said, “Sometimes. But the reality is, AI does already exist, as do humanoid robots. It’s just a matter of time that we combine complex AI and robotics into lifelike beings. The question shouldn’t be ‘if,’ the question is rather ‘how’ we interact with them, what our morals are, both protecting humans and AI ethics. We’re glad that this is still a more hypothetical question, and Siri and Alexa in our everyday lives are still much less threatening than Ela, in our film, might be.”

When I brought up that in the future, we might have to, as a society, agree on the rights of humanoid androids as we do with animals, Hoffmann agreed and said that it opens the door to questions we just don’t know the answers to. “Do trees have feelings?” He said to me, which I appreciated because the thought has never occurred to me to consider before.

Flicker and Hoffmann’s luminous film was said to be created from their love of science and robotics, and also from a demand for a more inclusive film landscape as filmmakers and the societal need to tell more diverse and new stories.

They seem to be blazing a trail that, it seems, should have already been on fire, considering where we are these days when it comes to AI. Fortunately for us, Flicker and Hoffmann are the brilliant and driven science fiction artists that are stoking the inferno that will radiate these very relevant questions into our society. Hopefully, in the afterglow, there will be a new conversation that will enlighten us in the way of inclusion and ethics. Many congratulations and, I have to say, admirations, to both Stella Flicker and Jerry Hoffmann on their exceptional, contemporary, eloquent, important work of art, I AM.