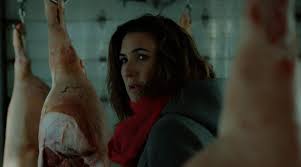 Los Angeles, CA (The Hollywood Times) 12/1/2021—The film FRIMAS, directed by Canadian screenwriter/director, producer, and actress Marianne Farley follows a determined, albeit terrified woman who is forced to decide whether to end her pregnancy with a terminally ill fetus in a country where abortion is banned. This film couldn’t be more topical as the Texas abortion ban after six weeks has just been announced (a time when most women don’t even know they’re pregnant) in the United States. This Texan law, Senate Bill 8, applies even if the pregnancy occurs from rape or incest, and even people who support or help the pregnant woman achieve her abortion are subject to possible criminalization and jail time. Abortion is criminalized in other countries around the world including Egypt, Senegal, El Salvador, Congo, and Vietnam, to name a few. This live action short film has qualified to be considered for a 2022 Academy Award.

In the film, the main character, Kara, is confronted by a grim and brutal reality. Even though obvious dangers are at play, including putting her own life at risk, she seeks out the services of an illegal mobile abortion clinic that is disguised as a meat truck, and is filled with frozen pig carcasses. Once inside the meanders of this morbid and death-filled clinic, she is faced with devastating repercussions, and narrowly escapes getting caught.

In my interview with Farley, whose second critically acclaimed short film MARGUERITE won over forty awards around the globe and earned an Academy Award nomination for Best Live Action Short Film in 2019, she began the discussion surrounding abortion with a stark, “For me, there’s no grey zones. Abortion rights are human rights. It is both ludicrous and dangerous for there to be a question about it.”

When asked how she felt about the standard, generic, pro-life arguments about using abortions as “birth control,” and the sort of conception that women go around having abortions willy-nilly without it having a huge impact on their lives, she relayed the fact that, “Women are going to get abortions whether it’s legal or not,” which has been proven over and over again by history. “The way to reduce abortions is sex education, and talking to boys and girls about contraception.” Farley went on to explain that women are often forced to have abortions with no support, that they are scared, and that they usually have to lie to people in order to not be judged harshly or alienated for their choice.

In the film, as a final, cruel insult, Kara is made to take the aborted fetus with her, because she has to make it look like a miscarriage to her husband. The doctor assisting her tells her that she must when she protests, and then says, “We do the best we can in life.”

Marianne Farley echoed this sentiment when speaking about abortions in general, that it is a heart wrenching, punch-in-the-gut kind of decision that woman simply do the best that they can with, and that the lack of empathy surrounding the topic is frankly appalling. She said of the character having to take the fetus with her after the painful, traumatic procedure that it was, “The cruelest thing to ask a woman to do,” but felt that it had to be in the film because this sort of thing is commonplace in reality, the having to lie or “prove” to another a miscarriage in order to circumvent severe, unkind repercussions.

“We’re not vessels; that’s playing God” she said, about the implication of one person forcing another to carry out a pregnancy against their will. “I know it’s a difficult film to watch. She went on: “I was called a ‘baby-killer’ at a festival,” which struck me as shocking, especially that it came from another woman. “But I didn’t want to glamorize it,” she said, steadfast.

The very real, authentic rawness of this film is bound to resonate with many, as it lays bare the catastrophic, tragic impact that the removal of abortion rights has on women. The fact is that there are well over 800,000 abortions performed in the United States every year, and to outlaw them does not prevent them from happening, as Farley said. It simply makes it a very unfair, dangerous, and sometimes lethal choice for women to have to make, which this important, profound, emotionally moving film points out very well.