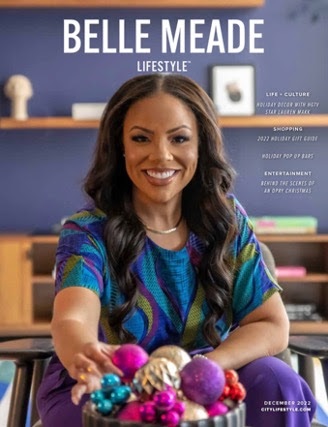 New York, NY – (December 5th, 2022) – Nashville, TN based Interior Designer, DIY Expert, and Television Host, Lauren Makk has captured the hearts and attention of fans near and far with her budget friendly approach to luxury DIY and re-design, and continuing just that as she graces the December 2022 cover of Belle Meade Lifestyle. It isn’t every day that you hear the words ‘Luxury’ and ‘DIY’ in the same sentence, but that’s because it hasn’t been done before… until Lauren Makk broke out on the DIY scene and quickly started changing people’s perception on DIY with every project she does. Many people may know Lauren from her time spent on multiple design shows across many networks including TLC’s Emmy Award winning Trading Spaces, A&E’s Drill Team as well as co-host on ABC’s FABLife, but now she is re-introducing herself and taking the design world by storm. Shattering the mold of those stuffy designers, Lauren is known to shake things up by spilling her best budget – friendly design tricks, tips, and hacks, as well as her luxury DIY projects. Aiming to elevate and change the stereotype of DIY’s past, Makk
insists she’s more accurately an “Interior RE-Designer”- as she specializes in re-imagining and re-purposing common every day materials in sophisticated and breathtaking new ways. And Lauren has done just that in recent TV segments with The Rachael Ray Show and The Drew Barrymore Show where Lauren taught the hosts how to create her budget friendly luxury DIY. Stay tuned to your local listings for Lauren’s episodes of The Rachael Ray show airing on December 6th, where Lauren sets the holiday table with Rachael showing her fun ways to serve cocktails and creating a custom balloon mosaic!

Her willingness to be so candid and make design accessible, has lent her the title of “Home Girl Next Door,” and has set her apart from others in the industry. Makk’s unique perspective and experience in design was fostered at an early age by her mother, whom Lauren describes as “Martha Stewart’s – Martha Stewart,” and who earned her homemaking skills through her deep African-American Southern roots.

When asked about gracing the cover of  Belle Meade Lifestyle December 2022 issue, Makk said, “When I first moved to Nashville I would race each month to grab a Belle Meade Lifestyle magazine so I could discover this community and all of the best things about it. Now, I’m on the cover?  I feel so honored and humbled that I get to be a part of this meaningful publication and hope it inspires other readers!”

A native of Oklahoma City, Lauren was raised in the Home Improvement industry, working alongside her mom who enjoyed flipping houses as a hustle. Makk, however, set her sights to the streets and initially wanted to pursue a career as a graffiti artist. Her mother insisted on college, and Makk obliged by majoring in Interior Design. Since then she has blended her innate talents for design, DIY, and art, with her years of construction experience to create her renowned firm, Lauren Makk Interiors, which specializes in ‘Affordable Luxury.’ In addition to being a designer and television host, Lauren lives a busy life as a wife to husband Al, and mother to two young boys, Preston (6) and Lennox (2) that they are raising in Nashville.

Makk has always prided herself about her willingness to share her modern family life, her whopping 140 pound weight loss journey, and more recently – serve as an inspiration to others as she candidly discusses her decision to live an alcohol free life. With those personal goals under her belt, Lauren is laser focused on her career, and is investing in herself the same way she has her personal growth. Makk is now expanding her brand and influence to take things to a whole new level.  We were first introduced to her as she perfected her expertise on the Emmy Award winning Trading Spaces for TLC, and then A&E’s hit home renovation show Drill Team. She then won the hearts of homeowners everywhere with her design and lifestyle advice as co-host of ABC’s hit daytime talk show, FABLife. On multiple seasons of OWN’s Home Made Simple, you’ll find Lauren empowering homeowners to create the homes of their dreams through savvy design hacks and budget-friendly Do-It-Yourself projects. Currently, you can watch Lauren’s star continue to rise as she judges talent on Shop Class for Disney + & Design Star: Next Gen on HGTV. She is co-hosting and contributing as designer on the freshman season of Bake or Break for The Food Network, as well as recently hosting ‘Urban Oasis 2022 Giveaway Home’ for HGTV and Discovery +. Stay tuned to Lauren Makk’s socials below for updates on future shows, day-to-day DIY tips, and updates from her busy life as a mom.