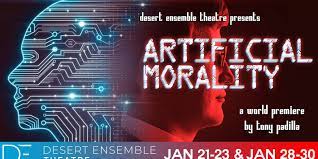 1/23/22 – A world premiere! Does it get any better than that? The Desert Ensemble Theatre is currently presenting Artificial Morality, created by company co-founder and playwright-in-residence Tony Padilla. It is his eighth original play—and you can see it at DET’s new digs at the Palm Springs Cultural Center.

Desert Ensemble has taken every possible precaution during these scary COVID-19 times to keep safe both the audience and the actors. At the box office, you are required to present your up-to-date vaccination card. In the theater, certain rows and seats are clearly marked off-limits to create social distancing. Masking is mandatory for all but the actors onstage.

The four cast members strode out to tackle their roles with good energy … well, almost. In the show we saw, actor Fergus Loughnane had to be replaced, because he was in quarantine after being exposed to the virus. An abundance of caution! DET executive director and seasoned actor Shawn Abramowitz bravely stepped into the role. He did a great job with who-knows-how-few rehearsals, and artistic director Jerome Elliott assured the audience Loughnane will hopefully soon be able to reclaim the part of Rufus Foster.

It is Rufus who starts the play. We see Rufus practicing for a job interview, and we watch as he slides oh-so-convincingly from one personality style to another … and then another. Don’t forget this, because his chameleon skill resonates later in the script.

His interview is with Edwina, an upper-level manager at Unitech, a smallish New York publishing house. Edwina is played by Bonnie Gilgallon, well-known as a singer and radio personality—and, we should disclose, my fellow theater critic here at the Independent. She is no stranger to the stage; in full strut with high suede boots and sassy leggings, Gilgallon plays her part with relish. My only complaint involves her hair: I wish she would cut or eliminate her bangs so we can watch how she uses her eyes, an actor’s most important tool. Her speech is crisp and lovely, but we miss out on the facial expressions because of the hair covering her forehead and eyes.

Scott Di Lorenzo is one of the most versatile actors around. I can say this from first-hand experience, having worked with him onstage in Twelfth Night as he devoured the delightful role of Sir Toby Belch, one of Shakespeare’s juiciest characters. (One of my most unforgettable rehearsal moments ever happened when Sir Andrew and I somehow both got tangled up in Sir Toby’s sword, and the three of us wound up in a pile on the floor!) Here, he appears much more serious (not to mention totally sober) and mature as Eddie Carter, earnestly applying for the same job as Rufus at Edwina’s publishing house. His flawless diction harks back to his excellent classical training, and his flashing smiles endear him to all. Some of the most satisfying moments in the production happen when he and Edwina have a scene together. But which one will she choose for the job—Rufus or Eddie?

Laura Martinez-Urrea debuts with DET as Lola Lopez, a reporter. Tiny in stature, she brings a sweetness and youthful enthusiasm to the role. We don’t usually associate sweetness and enthusiasm with hard-bitten, fact-checking media people … but then again, why not? It could happen.

The play is directed by Cameron Keys, whose history with DET is lengthy despite his youth. He was a recipient of the company’s hard-earned annual scholarship award, and he toiled as an intern with them as well; he’s now is rewarded with the challenge of his first directing role. His choices were generally solid, except for the blocking in one scene toward the end when Edwina gets stuck for way too long in a dimly lit upstage-right area, at a time when she had some important lines that should have been delivered from downstage, if not center. Perhaps we see too many profiles of the actors—another problem that could easily be fixed—rather than finding reasons for their fully facing the audience for at least part of their speech. It’s called “cheating out,” again making an actor a little easier for the audience to read.

Artificial Morality is a very talky play. It touches lightly on a huge number of topics, though none in very great depth. We hear the characters’ takes on women’s equality in the business world, “cultural appropriation,” free speech, narcissus complexes, the contrast between information and knowledge, the perils of success, the differences between style and substance, the internet, celebrity fame vs. true life, whether or not books are still important today, morality, apathy, ambition, discrimination, whether technology is good or bad for us, the media, celebrities’ reputations crashing—deservedly or not—and robo-buddies or sex bots. Pay attention!

Set designer Thomas Valach, lighting designer Ashton Bolanos and costume designer Andrew MacLaine all do fine work on this show, which felt a little bit under-rehearsed—something that’s no surprise given the pandemic situation. This will no doubt correct itself by the time the curtain opens on further shows.

Serious congratulations to playwright Angelantonio Padilla (I didn’t knew his full nine-syllable name before—and I love it!) on his eighth production, which runs about 75 minutes without an intermission. And congrats to Desert Ensemble Theatre for getting this play to the stage during this difficult time—and for the new home! The former movie house was designed and built to keep you relaxed, supported and entertained for shows of two hours or more. World premiere or not, my friends, it doesn’t get better than that.

Desert Ensemble Theatre’s production of Artificial Morality will be performed at 7 p.m., Friday and Saturday; and 2 p.m., Saturday and Sunday, through Sunday, Jan. 30, at the Palm Springs Cultural Center, 2300 E. Baristo Road, in Palm Springs. Tickets are $35. Proof of COVID-19 vaccination is required for entry. For tickets or more information, call 760-565-2476, or visit www.desertensembletheatre.org.