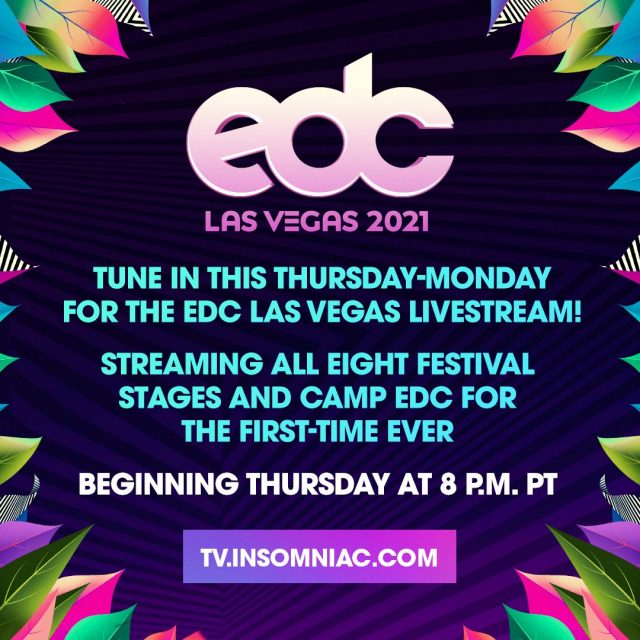 All eight stages of EDC Las Vegas, Oct. 22 – 24, to be live streamed across multiple platforms for first time ever

LAS VEGAS, NV – Today, Insomniac has announced Electric Daisy Carnival (EDC) Las Vegas, the world’s largest dance music festival, will produce its largest festival live stream in its history, for the first-time ever streaming all eight festival stages across multiple platforms including YouTube, Twitch, TikTok, Lomotif and Roblox. More than 75 cameras will transport viewers at home directly into the heart of EDC Las Vegas to join in on the festival’s 25th anniversary celebration. Beyond the unforgettable live sets from the world’s top dance music artists, curated channels will feature special moments and cultural clips from EDC over the last 25 years. Artists streaming live from EDC Las Vegas include Kygo, Rezz, Kaskade, Gryffin, DJ Snake, Excision, Zedd and more. Fans can tune in to tv.insomniac.com for full details.

“I am so excited that Headliners from around the globe will be able to experience the magic of EDC Las Vegas this year,” remarked Pasquale Rotella, founder and CEO of Insomniac. “This would not be possible if it were not for our dedicated partners who will make the virtual experience unforgettable for those raving from home.”

YouTube’s InsomniacTV stream will be the only platform with the option to watch all eight stages, from kineticFIELD to stereoBLOOM and everything in between, and will be the largest livestream on the InsomniacTV YouTube channel to-date. YouTube will also be streaming Camp EDC’s kickoff party tonight, Thursday, Oct. 21, beginning at 8 p.m. PT. InsomniacTV on Twitch and social video platform Lomotif will broadcast across a curated channel of select artist performances while hour-long live clips throughout EDC will also be airing on TikTok.

“Insomniac has been a great partner to YouTube in continually bringing live music to fans around the world. We are honored to share this special 25th anniversary event of Electric Daisy Carnival featuring 8 separate streams! It will be an incredible event.” says Ali Rivera, Head of Live Music and West Coast Artist Relations at YouTube.

In Insomniac’s newly launched Roblox metaverse, World Party, users can hit their favorite stages, including kineticFIELD, circuitGROUNDS and cosmicMEADOW to watch the livestream and interact with fellow virtual Headliners.

“We are thrilled and honored to be part of such a storied music festival as EDC Las Vegas 2021, and to help bring incredible talent not only to the hundreds of thousands of revelers in person, but to the millions streaming online via Lomotif,” says Ted Farnsworth, Chairman and Co-Founder and Chairman of ZASH Global Media & Entertainment.

Fans can also rave on the airwaves with live performances and other exclusive experiences and interviews on Insomniac Radio’s special broadcast, hosted by Wenzday and Taylor Kade, straight from backstage at EDC Las Vegas. Insomniac Radio is available for FREE at insomniacradio.com or in the Insomniac app.

Insomniac produces some of the most innovative, immersive music festivals and events in the world. Enhanced by state-of-the-art lighting, pyrotechnics and sound design, large-scale art installations, theatrical performers and next-generation special effects, these events captivate the senses and inspire a unique level of fan interaction. The quality of the experience is the company’s top priority.

For over 25 years, Insomniac has produced more than 2,000 festivals, concerts and club nights for nearly seven million attendees across the globe. The company’s premier annual event, Electric Daisy Carnival Las Vegas, is the world’s largest dance music festival and attracts more than 525,000 fans over three days.

The company was founded by Pasquale Rotella and has been based in Los Angeles since it was formed in 1993. In 2013, Insomniac entered into a partnership with global entertainment company Live Nation.