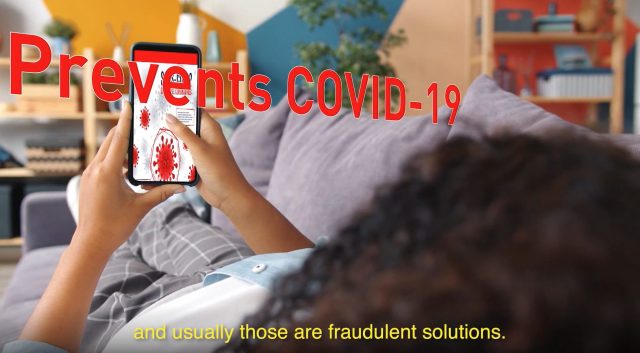 Los Angeles, CA (The Hollywood Times) 7/19/21 – The local PBS station KCET is screening a 6-episode series called “INFODEMIC: Global Conversations on Science and Misinformation,” about the roots and repercussions of science denial, propaganda, and information suppression in our world today. In this engaging series produced, directed, and written by Robyn Rosenfeld, we learn about the ramifications of misinformation in our post-truth era, as it is articulated by experts in a number of countries. “I was already in the process of investigating the disinformation divide in our country, including science denial, when the pandemic struck. But then, it was all happening at warp speed as science became further politicized and scientific misinformation spread rapidly across the globe,” remarked Director and Executive Producer Robyn Rosenfeld. “I wanted to document this unprecedented moment and also stylistically capture the frenetic sense that we were all experiencing under lockdown as our world was turned upside down.” 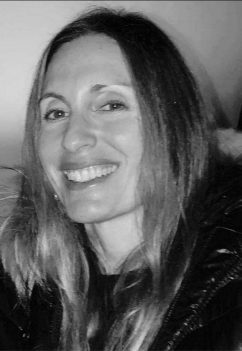 The series kicked off last Sunday (July 11) on PBS with Episode 1: Science Denial in a Post Truth World, featuring Lee McIntyre, author and philosopher of science at Boston University, along with Joy Y. Zhang, Chinese-born Lecturer in Sociology at the University of Kent, who talk about how misinformation has impacted public perceptions about science and COVID denialism. McIntyre points out that we have had 50 years of unchecked science denial. It started with the tobacco lobby trying to argue that there was no scientific evidence that cigarette smoking causes cancer. Big oil knew for 30 years that fossil fuels were a major cause of global warming but spend millions on their misinformation campaign. Later the same arguments would be used by political operatives in COVID denialism in the USA. Professor Zang notes it is an open secret that China has censured a lot of the early scientific data regarding COVID. A Chinese journalist was jailed for COVID cover-up accusations. The idea of harmonious society has been institutionalized in Chinese society, especially since the beginning of the rule of the Communist Party, so divergent opinions are discouraged. However, there is science skepticism in China. China had hoped to make their COVID vaccine a showcase but the lack of data transparency has eroded global confidence. 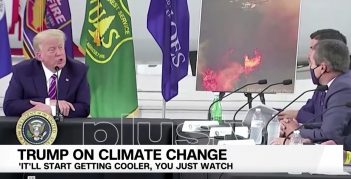 Episode 2: Dousing Denial: The Pandemic of Climate Change (July 11) explores climate action and solutions for Sudan, France and the world with journalists and climate activist Lina Yassin in Sudan and climate scientist François-Marie Bréon. Lina Yassin who lives in Khartoum, Sudan, is a Programs manager for the Middle East and North Africa at Climate Tracker.org, an international organization that empowers young people to better communicate climate change in their countries. Lina has been interested in climate change since she was 14 when Sudan experienced massive flash floods that impacted Khartoum and left many people homeless. With rising temperatures from heat waves, Sudan and other countries may become uninhabitable and compromise agriculture, which is the mainstay of the economy in this poor country. Desertification impacted farmers in Darfur and that was the cause of the terrible conflict a few years ago which forced farmers to migrate south in what was “the first climate war.” Lina speaks to young people directly about climate change and writes extensively, relating climate change to the daily lives of ordinary people and uses an Islamic perspective using the Quran to show that “God sent us to earth to protect it.” She rightly points out that climate change varies in different parts of the world and “reach climate debate needs to be customized to fit with the culture of the country.” 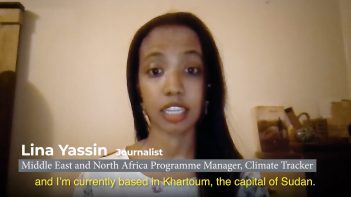 Like Greta Thunberg from Norway, Lina Yassin notes the fancy international conferences on climate change accomplish very little and are semantics-driven. François-Marie Bréon, a French climate scientist with Climatologue, Chercheur à L’Ipsi, who specializes in the use of satellites to study current climate and to try accurately measure sea level and the melting of ice caps in Greenland and Antarctic, as well as the disappearance of glaciers. It is interesting that France is not currently as impacted by climate change as are China and the USA. Bréon is interested in solutions to climate change, suggesting that all coal power plants need to be shut down and international flights need to stop in the next 10 – 20 years. He notes that with the COVID pandemic and lockdowns, the carbon emission decreased by up to 30%. The debate in France is whether the general public has access to reliable information and the COVID crisis has spawned so many conspiracy theories. It is all about changing perceptions and thinking long-term. As Lina Rassin puts it, “we need to shift from an alarming narrative to a solution-driven narrative. It’s really a fight for all, and it’s about justice.” “Even if you are not impacted, someone else is, and we need to fight together.” 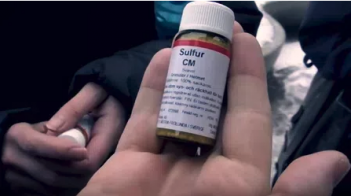 Episode 3: Disinformation Divide (screening July 18, 7 pm on PBS) investigates disinformation and pseudoscience propagated by governments in India and Brazil. Cary Funk, Director of Science and Society Research at Pew Research Center in Washington D.C., and Faris Bukhamsin, CEO of Scientific Saudi, a science communication agency aimed at promoting science and its importance in daily life. Funk begins by noting a brief period of “American unity” in the U.S. early on when the outbreak of COVID had just taken hold – but within weeks, the public’s view of scientists grew politicized, thus unity dissolved into a political divide. This was due to the rapid, unchecked spread of disinformation via social media and the repetition of misinformation that many people began to believe as truth. In Saudi Arabia, Bukhamsin describes the government’s own curiosity and interest in science as part of the public’s willing acceptance of science – when science is taken on as a “national strategy” rather than a tool for division. That, coupled with the Saudi Arabian government’s clear response to the COVID crisis, its strict regulation of misinformation and its “united front,” as Bukhamsin describes, were crucial to its success in public cooperation and taming the virus in its early stages. 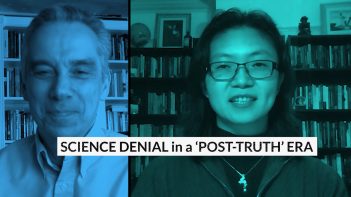 Episode 4: When Governments Ignore Science (screening July 18, 7 pm on PBS): In this episode, we hear from Narendra Nayak in India, president of the Federation of Indian Rationalist Associations, and Natália Pasternak, president of the Instituto Ouestão de Ciència  (Question of Science Institute) in Brazil, as they compare how each of their countries’ governments had communicated the COVID crisis to the public. In India, the government had turned to anything but science, Nayak explains, promoting and taking up claims by non-scientific bodies – astrologers, worshippers at Puja rituals, and people who present “quack remedies” to the coronavirus. Such remedies have included the consumption of cow’s urine and banging pots and pans. Meanwhile in Brazil, Pasternak describes the government’s response under President Bolsonaro’s leadership as “the worst possible,” not only for turning a blind eye to science, but also downplaying the severity of the crisis and spreading false information. It was enough to prompt the public to take it upon themselves to establish precautions against COVID-19, like drug lords organizing lockdowns and curfews in their own favelas. 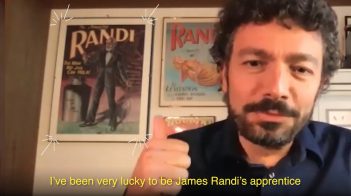 Episode 5: Busting the Myths: From Propaganda to the Paranormal (screening Sunday, July 25, 7 pm on PBS) introduces us to Massino Polidoro, Journalist, Author, and Psychologist, Executive Director, Italian Committee for the Investigation of Claims of Pseudoscience. Polidoro studied under James Randi, a Canadian-American stage magician and scientific skeptic who extensively challenged paranormal and pseudoscientific claims. His first challenge was the spoon-bending of Uri Geller, a kind of paranormal rock star who was invited to every TV talk show at the time. He stresses the importance of teaching children to think critically, much more important than teaching them facts. Amardeo Sarma, industrial engineer and chair of the Society for the Scientific Investigation of Pasasciences in Germany, publishes a magazine “Skeptik” which promotes critical thinking and provide counter-information which debunk paranormal claims and conspiracy theory. Their greatest success has been in debunking the claims of homeopathic medicine in Germany, including quack medicines to counteract COVID.

Episode 6: Science in the Face of Natural Disasters (screening Sunday, July 25, 7 pm on PBS) features Inez Ponce de Leon, Ph.D., risk management expert and professor at Ateneo de Manila, point out: “The policies for warning people in a typhon are far better than those for informing people in a health pandemic. You need infrastructure and really good risk communication.” Sadly in the Philippines, President Dutarte’s government provided little help and much disinformation. Masataka Watanabe, Science Writer and President of the Japanese Association for Science Communication, works to set up the network between science communicators in his Science Agora. “The biggest problem with the Fukushima disaster was that they predicted the tsunami and its effect on the nuclear reactors but hid what they knew.” Watanabe draws parallels to Japan’s handling to COVID: “Young people were told that they are not affected by COVID so they go out shopping and to concerts. Elderly people with compromised immune system still went to the karaoke and got the disease.” The People don’t trust the government. Transparency and disclosure are what is needed by governments.

Robyn Rosenfeld is the writer, director, and producer of this PBS series INFODEMIC. The series has been supported by the Aspen Institute, the Rita Allen Foundation and Instituto Questão de Ciência (Question of Science Institute) in Brazil. Rosenfeld is an actress, writer, and producer of feature films, documentaries and television series. She created and produced Creature Features for HBO – an original anthology series of Primetime Movies which premiered Fall 2001. She co-produced the documentary films China Journal (1987) and Exiles (1989) directed by Academy Award winning documentary director, Richard Kaplan. In 2016, Rosenfeld co-produced the short documentary and panel discussion Ageism in Hollywood. Rosenfeld helmed International Sales for the acclaimed documentary Jodorowsky’s DUNE (2013), nominated for Best Documentary from the National Board of Review and listed on Oscars Documentary Feature Short List for 2014. Rosenfeld distributed the critically lauded film Anton Chekhov’s The Duel (2010), starring Tobias Menzies and Andrew Scott. In 2015, she was Executive Producer of Effie Gray, a feature-length historical drama written by Emma Thompson, starring Dakota Fanning and Emma Thompson.