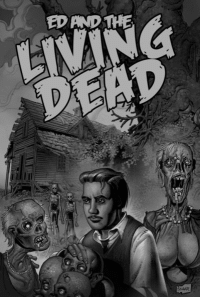 Producer/director Brandy Mason (a seasoned horror filmmaker with more than thirty credits, among them Don’t Fuck in the Woods and its upcoming sequel, WrestleMassacre helms this film.

“The zombie film is an incredibly durable sub-genre, but sometimes it needs a little twist to be really engaging. Dropping iconic figures like Ed Wood and Criswell into the mix and setting the film in the 1950’s instantly changes what the audience will expect from the story,” said Mason.

Rising Fire Films LLC, the film’s production company, was created in 2011. Best known releases for this company are Fireside Tales, Monkey Farm, and Friday the 13th: Legacy (a viral-sensation fan film) are its’ best-known releases to date.

Ed and the Living Dead is sure to become a cult horror classic especially for fans of zombie films! If you are interested in backing the campaign, you can do so here.