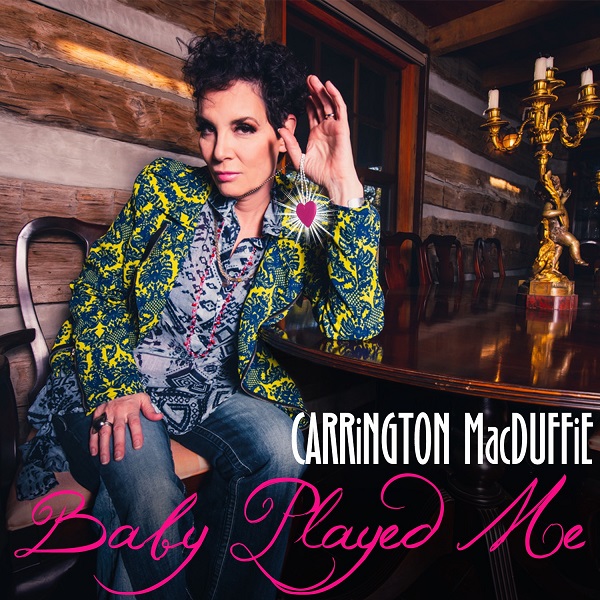 Rancho Cucamonga, California (The Hollywood Times) 04/05/2021 – “‘Baby Played Me’ was written as an homage to all Musicians. The Experience of creating and playing music live.” Carrington MacDuffie told The Hollywood Times during an exclusive phone interview.

Carrington MacDuffie is releasing her next single “Baby Played Me” today, April 9th, and will be included in her LP to be released in late spring/early summer.

The Hollywood Times is honored to be Premiering Carrington MacDuffie’s new single “Baby Played Me” TODAY.

“Carrington MacDuffie brings her sultry voice and cool lyrics to “Baby Played Me”.  I was quite pleased to be introduced to this amazing singer/songwriter and really enjoyed the music accompanying her awesome voice in her new song. A song for all the musicians out there and the instruments they play.”  Judy Shields, The Hollywood Times

Her new EP ‘I’m The One’ is available now. It is rare for an album to be introduced to the world that captures such a distinctive combination of dreams and realism but as MacDuffie delivered single after single, it was evident that this release would change how all viewed reality. After months of anticipation, fans finally got caught up in the story Carrington has crafted throughout the EP. With an open mind and a diamond intellect, MacDuffie provides lyrical medicine to troubled hearts with the release of ‘I’m The One.’

“There isn’t a single one of us who isn’t the center of the universe, and the claim made by the title track “I’m The One” goes for everybody,” says Carrington.

This album allows listeners to follow along with Carrington’s personal and cultural experiences, inviting them into her colorful mind and ideas behind each single. Every catchy hook from “Because I Couldn’t Have You” to “The Way You Were Mine,” is a promise of genuineness and passion. Listeners may hear a different message in each single, but all souls are captured as MacDuffie’s feelings are expressed. ‘I’m The One’ offers a unique pop flare and appeals to a deeper side of all.

“I experience life itself as a form of music, and that’s the energy that runs these songs,” says MacDuffie.

With a brand new take on music, Carrington has taken a bold step to remain unique in her style by mixing several genres while also sticking true to the classic inspirations that influenced her career. From writing to producing, her musical intuition depicts intense energy in the “I’m The One” EP. Carrington generates power and release while appealing to all audiences in this can’t-miss debut.

Far-reaching influences of a musical New York childhood weave through Carrington’s unusual, hook-laden songs, and stand out in her new EP “I’m The One,” which evolved through rapid spiritual and personal growth into the form of dynamic music. Pulling from all facets of life, Carrington channels her diverse musical tastes into an edgy blend of roots, pop, and rock, resulting in a sound all her own. Following a 2-month tour of the
United Kingdom in 2019, including several recording sessions in Glasgow, Carrington returned to the United States to complete the tracks for the new record. She’s also busy with her career as a renowned and versatile voice actor, having voiced biographies of
Pussy Riot, Joni Mitchell, and Jack Kerouac, and video games including World of Warcraft, in which she played a shamanic Scottish Dwarf. Carrington says, “It’s all about adventure. I see the world as one big art happening, and I love participating in it.”

Toured extensively in the United Kingdom, Germany, Belgium, The Netherlands, France,
and the United States.

Carrington MacDuffie Biography Far-reaching influences of a lively musical childhood weave through Carrington’s unusual, hook[1]laden songs, and stand out in her new EP, “I’m the One”. The spirit of independence runs deep in her lineage, with her English forebears having fought in the American Revolution, including a colonel who crossed the Delaware River with General Washington. This maverick spirit has persevered through successive generations, and informs Carrington’s artistic practices, her passions, and her calling in life.

A native New Yorker, Carrington’s love for music was sparked in early childhood while listening, dancing and singing to the records that her dad, a huge music aficionado, was spinning — Teddy Wilson, Beethoven, Herb Alpert, Hudson River folk, Scottish marches, Bob Dylan, classic rock, and the Beatles, among many other artists. She went on to study in New England and Baltimore, and lived beachside in Los Angeles for a decade. Currently, she divides her time between Austin and Seattle.

Recently, Carrington has devoted much of her time to touring. In 2018, she began the year with a trio of shows at the Sundance Film Festival showcase, then set out on an ambitious two month tour of Europe including the United Kingdom through spring and summer, with radio shows along the way. Along with British musician and composer Adam Blake, she performed shows to a wide range of audiences in Germany, Holland, Belgium, and France, where she played at the popular club Belushi’s in Paris. Highlights in the UK included shows in Bristol, Bath, Brighton, Glasgow, and Inverness.

Without a doubt, the pièce de résistance of that year was a visit to the pristine Isle of Colonsay in the Inner Hebrides of Scotland. Colonsay is the ancestral home of the MacDuffie clan, where they lived for centuries before heading to the American colonies in the early 1600s. Carrington had the thrill of performing in a church on the site where her ancestors worshipped. The experience deepened her connection to her Scottish roots, and to the country itself. “As soon as we crossed the border from England into Scotland, I felt an energy shift. I felt free,” she says. It also inspired one of her newest songs, “Glasgow,” a rousing tune about both the city, and the circumstances of grass-roots life as a musician on the road.

In 2019, Carrington toured the UK for two months, singing and playing her custom electric ukulele, with a guitarist completing the duo – over the course of the dates, she was accompanied by Anthony William, Carter Arrington, and John Gray. A couple of full-band shows were on the itinerary – in Dundee, and at the Belladrum Tartan Heart Festival in the Scottish Highlands. Other highlights included TVWStock in Wales and Stockport Pride in England.

She has recently released singles online, including “I’m the One,” “Glasgow,” and a kick-out-the jams version of “Blue Christmas”. Carrington released an EP in April 2020, and currently has recording projects going in Glasgow, Austin, and Nashville. New songs include the originals “I Saw You Be a Man” – about the archetypal way men and women relate intimately – and “The Kiss I didn’t Get Last Night,” of which she says, “It expresses how the elusiveness of a real connection with another soul can take on a mysterious and sexy tone.” The latter two were recorded with the same Nashville team that played on her 2018 LP Kiss Make Better. She’s also in production on a rocking cover of Kacey Musgrave’s “Follow Your Arrow,” with tracking underway in Glasgow, Seattle, and Austin.

As a voice actor, Carrington has recently performed narrations for audiobooks of Gail Sheehy’s landmark best-seller Passages, Marianne Williamson’s newest book A Politics of Love, and Pulitzer Prize-winning author Marilynne Robinson’s What Are We Doing Here. She served as the voice of Ancestry.com for three years, and she has voiced biographies of Joni Mitchell, Pussy Riot, and Jack Kerouac, and characters in video games including “World of Warcraft,” in which she played a shamanic Scottish dwarf.

Carrington traverses the globe and her inner muses with gleeful explorations of thought and practice. Whether making music, writing poetry, voicing works of literature, piloting a fixed-wing airplane, or savoring the zen-like concentration of target shooting, she is led by her passion for creativity, and, of course, independence.

“I think the purpose of life is joy,” says Carrington. “I see the world as one big art happening, and I love participating in it.