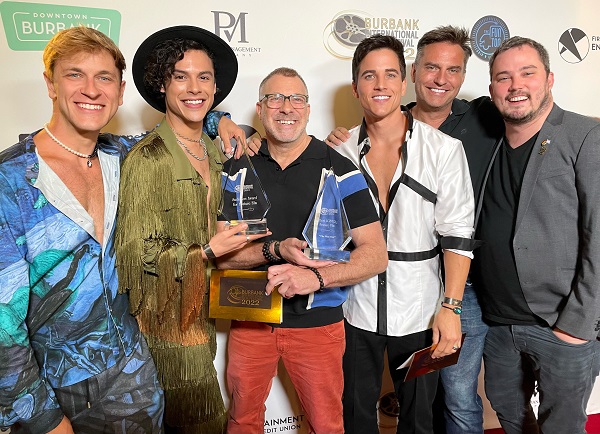 Los Angeles, CA – Independent horror-thriller film “The Way Out” received recognition for both the Audience Award and Best LGBT Feature Film this Sunday, Sept. 11 at the 14th annual 2022 Burbank International Film Festival, where over 180 internationally acclaimed films were screened.

Most known for his film, “Killer Therapy”, Barry Jay is no stranger to horror films. The director’s newest indie drama, “The Way Out,” stars Jonny Beauchamp (“Penny Dreadful”), Mike Manning (“This Is Us”), Ashleigh Murray (“Riverdale”), and Sherri Shepherd (“30 Rock”), and tells the story of Alex, a young addict that finds himself in unfavorable circumstances after developing an intimate relationship with Shane, a manipulative roommate who sends him down a path of destruction that comes with a risky price.

The Burbank International Film Festival displays 30+ awards in various categories that highlight topics of inclusion, awareness, and diversity in the film world. This year, hundreds of films were selected to be a part of the festival to showcase their work to attendees, screening judges, and other professionals in the field.

It was truly a successful night for the “The Way Out” team, winning not only the Best Feature Film in the LGBT category, but the Audience Award, which is selected from the votes of all who attended screenings throughout the course of the festival.

Director Barry said during his acceptance speech, “Winning the Audience Award and the Best LGBT Film Award in the same night, at a festival that includes content of all different types from across the world, sends the message that LGBT content is not only more accepted than it was when I was growing up, but celebrated and embraced by audiences from all over. We are very happy.”

For more information about the film or where to watch visit: https://twitter.com/TheWayOutFilm