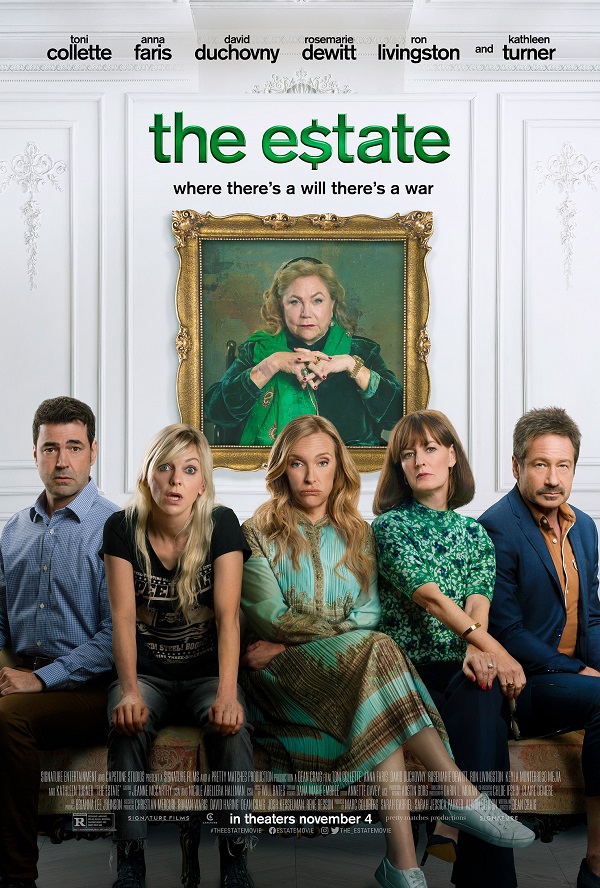 The Hollywood Times had the opportunity to see this comedy movie and let me tell you, it sure is a comedy.  You will need tissue, not for sad tears but for laughing the tears right out of your eyes.  Anna Faris is such a fantastic comedic actress, she plays her role to the T as Savanna, Macey’s sister.  Toni Collette as Macey was just the character I would be in real life.  She wants to help out her sister but has love in her heart for her aunt Hilda, but money would help her out.  Kathleen Turner was a hoot and what a great role she played in this true to life movie.  You will love Aunt Hilda. I bet this happens more often than we all realize. To be so lucky to have a rich aunt that you might get her fortune from, come on… like we all haven’t thought of that once in our lives.  But most of us would help that sick aunt out for love and not money. This movie shows it done in a whole comedic way.  The characters and actors chosen for this film were great picks. Like David Duchovny as Cousin Richard, but he wants to be called Dick, I say no more!  Husband and wife actors Ron Livingston as James and Rosemarie DeWitt as Cousin Beatrice did an awesome job as husband and wife, who show us what money and greed can do to a married couple. Bravo!  Keyla Monterroso Mejia is all the gamers out there hero and her character will truly amuse you with one scene in particular.  You have to see it!

The movie is great from the beginning to the very end which will make you go “WHAT.”  I sure hope you all go out and catch this movie at your local theater, you will not be disappointed. Remember one thing, it is Rated “R” so make this an adult date night.  Then tell all your friends and family to go see it.

Macey and Savanna may not have much. But they’ve got the perfect plan. With a ramshackle café teeter-tottering on the brink of extinction and their lives going nowhere fast, the two sisters
conspire to win over their terminally ill Aunt Hilda – the family’s overbearing, curmudgeonly matriarch – in the hopes of becoming the beneficiaries of her vast estate. But as Macey and Savanna
soon discover, there may be other relatives who have the exact same idea.

Signature Entertainment and Capstone Studios present, The Estate, a Signature Films and Pretty Matches production written and directed by Dean Craig. The film stars Toni Collette, (The Staircase) and Anna Faris (House Bunny) as two down on their luck sisters determined to be come the prime beneficiaries of their Aunt’ will. The ensemble includes: David Duchovny (The X-Files; Californication) and Rosemarie DeWitt (The Staircase; Little Fires Everywhere) as their cousins and chief rivals, Richard and Beatrice; Ron Livingston, as Beatrice’s compliant husband, James; Keyla Monterroso Mejia (Curb Your Enthusiasm) as the sisters’ Dungeons & Dragons obsessed younger sibling, Ellen, and Kathleen Turner (The Kominsky Method), as the fearsome family matriarch, Aunt Hilda.

Nothing brings a family together, like tearing each other apart…
In Theaters Friday, November 4th

Introducing The Cast of The Estate – They’ve come with the best intentions. They’ll stay till their bank accounts are filled.

The Sweetheart: Toni Collette as Macey “I don’t want to be a will hunter.” Despite her better judgement, Toni Collette’s Macey is a sensible woman who finds herself in an insane situation thanks to the infectious determination of her irrepressible younger sister.

The Hustler: Anna Faris as Savanna – “Let’s go get rich from that dying old bitch.”  Playing opposite Collette (in every sense of the word), is Anna Faris, who stars as Macey’s combustible sister, Savanna.

The Manipulator: Rosemarie DeWitt as Cousin Beatrice – “I came out of the goodness of my heart.” Cunning? Scheming? Manipulative? Check, check and double-check. But Cousin Beatrice has one distinct advantage over her chief rivals, Macey and Savanna, as she’s quick to point out: “Aunt Hilda thinks the sun shines out of my ass and that you two are a couple of dipshits.”

The Appendage: Ron Livingston as Beatrice’s Unfortunate Husband (James) – “There’s a line. And that line is crossed when I’m being farmed out as a f**kboy to geriatric members of your family.” Mercifully, Ron Livingston’s off-screen relationship with wife, Rosemarie DeWitt, is a far cry from what he endures in The Estate. Because on-screen, Livingston’s character, James, is not a
man to be envied.

The Dungeon Master: Keyla Monterroso Mejia as Ellen –
“I’ve got a D&D convention on Zoom. A really important one.”
Macey and Savanna have one last card up their sleeves – namely their little sister, Ellen – when their play for Aunt Hilda’s money hits an unexpected and seemingly insurmountable last minute
snafu. Unfortunately this pickle-juice guzzling Dungeons and Dragons Master (who goes about her day-to-day life in cosplay outfits), has little time to spare. But she is willing to help her siblings out with their final, utterly desperate, and dubious scheme – it’s complicated – under one condition.

The Matriarch: Kathleen Turner as Aunt Hilda – “Who the hell are you people?” Alas, dear Aunt Hilda, a single woman in the prime of life on her (admittedly cozy) deathbed, with a bountiful estate to share amongst her adoring would-be heirs; those loving relatives who have crawled out of the woodwork to be there for her in the hour of their greatest greed. Is Hilda wise to their game and happy to string them along? Or is she truly trying to determine how best to settle her affairs?