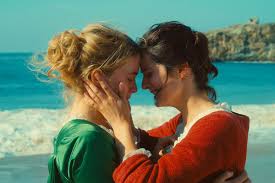 Just in time for Valentine’s Day, the star of Céline Sciamma’s smoldering queer romance details her experience on set.

(The Hollywood Times) 2/14/20 – Lesbian love story Portrait of a Lady on Fire, French director Céline Sciamma’s Cannes-winning masterpiece, didn’t exploit its actresses as passive muses but rather incorporated them as vital partners in the creative undertaking. Noémie Merlant, one of the film’s co-leads who first stunned audiences with her performance as a radicalized woman in 2016’s Heaven Will Wait, takes on the role of an eighteenth century painter hired to immortalize a soon-to-be-married noble woman Héloïse (Adèle Haenel) in secret on an island in Brittany. Romance soon overtakes them, between every brushstroke and piercing gaze.

“You create the transformation of the character and her desire with little things, like a small movement or with a subtle smile,” Merlant tells me of constructing the sensual relationship her character develops with her living subject. The project as a whole was uncharted territory for the star, since she’d never worked on a movie where the writing was so detailed and the directing so precise. Long before Merlant got a call to audition for Sciamma, she had been an admirer of the auteur’s female-driven cinematic portraits.

Sharing her experience of portraying a painter in love, Merlant spoke about what an artist focuses on when observing others, whether all those longing gazes were in fact scripted, and what she’s come to realize about love along the way.

Part of what makes your performance in Portrait remarkable are your gestures and believable mannerisms of painting. Can you describe the process of learning this from Hélène Delmaire, the artist behind the paintings we see in the film?

I spent a lot of time watching her, even on set when she had to create a painting for each scene. The camera filmed her for, like, thirty minutes without cutting. So I was really observing each movement that she did. Before the movie, I spent time watching her and trying to do the movements, because I needed the technique. Since in real life I use my left hand, I had to practice using the right, since she is right-handed. The first thing I was really focusing on was observing her gaze while she’s looking at a model on the canvas. I was trying to copy the gaze that all painters have. It’s like they really concentrate. The gaze—like Céline has when she is looking at us—is almost mystical.

What do you think the artist is looking at when she concentrates so intensely on the subject?

It’s hard to describe because it’s a mix of looking for details. The painter observes the visual details like the lights, the color, the intensity of the light, the contrast, every detail—and at the same time, it’s way bigger than this because it’s capturing an emotion or a sensation that is not concrete. It’s the same for the director or for an artist in general. So it’s hard to explain this gaze, but it’s a gaze that was really important for me to capture before getting the gestures or the rhythms right. This was the most important thing.

Céline Sciamma talks a lot about the intersection between romantic desire and the desire of the artist to create. How did this notion guide or influence your performance, and was this something implicit or did she directly verbalize it to you and Adèle?

It’s so present in the script already that we didn’t have to intellectualize that too much. I experienced this myself, the fact that you can fall in love and share an artistic experience with someone, these two things at once. What we worked on was not rationalizing that or rehearsing it too much with Adèle. She really wanted us to build this collaboration in the present. That was the most relevant thing for Céline. I didn’t know Adèle personally—on screen, yes, but not in real life. So when we were together we tried to observe each other, to surprise each other, and create a relationship between us as actresses at the same time as we were creating Héloïse and Marianne’s relationship for the film.

Tell me about meeting Adèle for the first time. What do you recall most vividly about the first encounter that launched your incredible on-screen pairing?

At the audition, not the first audition because that was just with Céline, but for the second audition, Adèle was there. I was really stressed because I didn’t know her personally. I knew that she was intense in movies, and you can’t know how a person is in real life. But she was really cool, actually. She jumped like a kid to come say hi to me. She was really friendly and that made me comfortable. The fact that Céline and Adèle have a strong story together, I was thinking about that. “How will I find my place and be able to be relaxed?” And the first time I saw them together at the audition, they were really being careful about not making me feel like I wasn’t part of it. They had this vision of sharing the movie like, “We are all collaborators. Yes, the two of us have this strong bond together, but what we want to do is open it and share it.” And they were incredibly friendly toward me, making me comfortable to express myself.

Since you were familiar with Sciamma’s films prior to entering her set, did the way she works surprise you, or was it similar to how you expected her to behave?

“Love is really about sharing. Collaborations are not only artistic.
A love story is also a collaboration.”

You never know if the films you see and the artists behind them are coherent. There are artists who are delivering messages full of love and equality and in their life they’re not like that at all. They are completely different. So I didn’t know how she would be, but since the first time I met her, I was not surprised because it was coherent with our work—but I was happy that she as a person was coherent with what she presents in her cinematic vision. She was looking at me straight in my eyes and she was giving me the lines of Héloïse. That was our first meeting, our first experience together. She was not the type of director who looks at you from behind the camera and directs you from there while you play the scene with someone else. No, she was herself giving me the lines of Héloïse, trying to create a relationship based on equality, a horizontal gaze between us.

And it was like that during the whole process of the shooting and even now. She really shares the same vision in life just as she shares in cinema. Part of her vision is trying to be aware that culture and society in general is always seen through the male gaze. And sometimes we don’t even notice that this exists and what it is. She doesn’t want people to change their vision, but just to notice and to realize that there is more than one vision. There are all sorts of female gazes. And if you know that there are other gazes, you can know with conscience where you are and what you want. That is really precious.

Claire Mathon, the film’s cinematographer, has said there’s a language of a gaze between you and Adèle that’s often stronger than the spoken dialogue. Were these telling looks spontaneous or precisely devised by the director?

Everything was written in the script, even the gazes. Like the lines, they were also part of the text: the silences, the gazes, the breathing, the movements. So you learn these elements as if they were lines of dialogue. You know that you have a specific gaze here or there, just like you know your line in that moment. All of that is written, but it’s the way you do it where you have freedom as an artist and as an actor. You know where you are going to look at her in that scene, but how are you going to look at the person? I know that she would look at me at that moment, but I never know how, with what intensity, with what rhythm, or what she will put into that gaze and what I will put in. The major part of our work was really figuring that out.

In making Portrait and working with Sciamma, did you feel like you learned or understood something new about love and desire that you hadn’t previously considered?

It’s not something I learned, but something I realized I already knew, which is that the memory of love, the past of love, remains a part of us, and love is really about sharing. Collaborations are not only artistic. A love story is also a collaboration. You have to create this environment for love to happen. In this movie the conflict is less exciting than consent, when both people agree to be part of this love story. This movie shows how reaching that agreement can be full of surprise and excitement. This is a vision of love that is not told enough in cinema and that is so true. Sometimes it’s ignored. I realized this about love and building something with someone else.

Your new movie Jumbo, which premiered at Sundance, is also a love story. Were there any parallels between that and Portrait?

It’s completely different. I actually shot Jumbo way before Portrait so it’s quite a long time ago. It was another experience because it’s a story of a girl who falls in love with an [inanimate] object and about how she accepts herself and makes her mother, and other people, accept their own desires. It’s a movie made by a woman as well. It was a new experience for me to work with an object and not someone. It was quite hard—but, just like Portrait, new.