(The Hollywood Times) 12/5/22 — Airen DeLaMater thoroughly enjoys the horror genre, so when she was offered the role of Sister Rose in the new indie film, Impuratus, she was eager to tackle a complicated role in the bitter cold corridors of Philadelphia’s Pennhurst (Haunted) Asylum.

For six weeks during brutally cold weather, the A-list cast of actors, supported by a top-notch crew, headed to The Penrose Strawbridge House in Horsham, Pennsylvania, and the asylum in Spring City, PA., both located just outside of Philadelphia.

The movie, written and directed by Michael Yurinko, was produced by Guy Quigley’s Thundersmoke Media, the same film company that produced Apparition.

The teaser for Impuratus has won several dozen film festival awards and the movie has won three awards; including those for Yurinko and Tom Sizemore.

Recently retired from the police force, Detective Douglas, who has basically seen it all during his decades in law enforcement, travels through the wooded country road on his way home.

He has to decide whether to go home and finally be the husband and father he needs to be OR turn down the other road towards the insane asylum – towards the doctor that called him earlier in the day in a frantic tone before the line went dead. 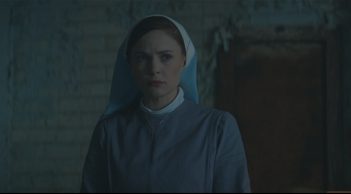 Out in the vast emptiness sits the massive state hospital. He is quickly met by Dr. Heysinger (Robert Miano) who tells him about the mysterious man in the basement who oddly enough asked for the detective by name. That disturbed man, Daniel Glassman, a Civil War soldier, wants to confess to something horrible, and he yearns to confess specifically to Detective Douglas.

Deep within the bowels of the basement, locked in a room is Daniel – a bloated, half-dead old man covered in scars and bruises. Already in the room is Sister Rose (Airen DeLaMater), who is present for medical aid and spiritual guidance.

As Dr. Heysinger breaks the sealed envelope and reads the strangely typed confession, we are transported back to 1862 and we see firsthand what unbelievable events took place. Not only will it shock everyone involved but it will have them questioning the very fabric of their faith and fighting for their lives.

DeLaMater’s film and television career show her diversity and ability to shine in both supporting and leading roles.

In Impuratus, she plays Sister Rose, the female lead, and other performances over the years include Bloodrunners, Silent Run, Zeroes, Apparition, A Crime to Remember, and many others.

DeLaMater has several acting projects on the horizon, as well as the development of two screenwriting projects. She is concurrently an MBA candidate at Pepperdine University’s Graziadio School of Business where she is earning her master’s degree in entertainment management.

Quigley adds, “I don’t think a lot of actors would have been as comfortable with the cold for multiple takes, and there are a lot of divas out there who would have complained, but not Airen. She was like “Let’s go and do it again. I thank her for the way she was rolling with the punches.”

Veteran actor Tom Sizemore, who has dozens of movies and TV projects under his belt, wholeheartedly agrees. “Airen was simply wonderful. I loved working with her,” he says. “She was so serious about her work and well-prepared. She knew all about the period and she looked the part 100 percent.”

Read on to find out just how chilling — physically and emotionally — it was to film Impuratus, how Airen jumped into Sister Rose’s bones, and how the role stayed with her long after the shooting ended.

Please describe this movie Impuratus in a few sentences.

Airen DeLaMater:  It’s a new twist on a tried-and-true possession film that will keep you guessing.

How creepy was this new indie movie, Impuratus?  Do you have any stories to share about working in an asylum?

Pretty creepy. I had to prepare myself for that because the asylum is a place with a lot of its own dark history. I wanted to truly have a feel for the place because we watch as Sister Rose becomes acutely aware that this institution is harboring a dark evil and time is running out. Having a sense of place is important to my creative process and that urgency was readily palpable in the space if one chose to be open to it. During breaks, I would sometimes go in there on my own and just walk through or explore. Of course, this was during the daytime and it was never for too long, and maybe that was weird, but it certainly helped me feel the stakes and access the terror.

In the end, I felt a deep respect for getting the chance to work at Pennhurst. Nothing creepy happened personally to me. I know that the crew had some experiences in the weeks leading up to filming when they were preparing the space.

What kind of stories?

A few people said that they heard their names being called down one of the corridors. Someone else said that they felt a hand on their shoulder. Just this general feeling of something being there that they couldn’t see.

Were there certain parts or certain aspects of this script that grabbed you?

Well, I love horror. The first iteration of this script that I read was years ago, and even though the core of the story really stayed the same, I thought it was such a unique and smart kind of take on a classic possession film.

I think that the audience will see very quickly that Impuratus is not abiding by all of the traditional of rules of the subgenre.

What attracted you to the rather complex role of Sister Rose?

I had worked with [producer] Guy Quigley on the movie Apparition seven years ago and it was such a great experience, combined with the fact that I absolutely loved the script for Impuratus.

I also couldn’t wait for a chance to work with writer-director Michael Yurinko. We’d been trying to figure out how to work together for some time now, so that was really exciting when this all came together. We speak each other’s creative language.

Please talk about working with Michael. What kind of director is he?  What did you learn from him?

Michael is incredibly collaborative. He’s very open to feedback and to questions. I’ve found that it’s incredibly important for me as an actress to feel supported in that way.  In that sense, I really couldn’t have asked for a better experience from a director.

Tom, Robert, and Jody were all incredible, and the crew was amazingly supportive as well. We go to a lot of dark places in this film, especially Sister Rose. It’s very easy to believe in a vision when there is someone as dedicated as Michael at the helm. I can’t say enough good things about working with him.

Tell me what you like about horror movies, and a few favorites and why.

I really love horror films, but that being said, I’m not a huge slasher fan. I recently saw The Autopsy of Jane Doe, and something about the simplicity of the premise paired with where Øvredal, ultimately takes his audience is masterfully unsettling. You keep going a level deeper.

Or in the case of Mike Flanagan’s television series Haunting of Hill House, there’s such a rich family drama that’s embedded within the vehicle of horror. I feel like it’s very rare that we’re seeing just horror these days. There’s usually something much deeper going on story-wise rather than just something that’s made to scare and entertain you.

For example, Jordan Peele’s work is transcendent in this regard as well.  Sure, it is fun to be scared, but it’s also a way to start a larger cultural dialogue. Horror filmmakers are aware that they can kind of slip the medicine in with the mashed potatoes so to speak and a lot of their audiences respond to this.

Let’s talk about the challenges. I’ve already heard it was bitter cold.

Yes, it was, but the exciting parts easily outweighed the challenges. When it came to preparing, the challenge was continuously being able to access the terror that Sister Rose felt, building up to it, sustaining it, and ultimately accessing something that was much more powerful than terror or fear which is courage. Finding exactly when those moments happened, her arc, and how that was going to transpire was the essence of the preparatory work for me. Once I did that, she clicked.

So as far as filming goes, I would say physically, yes, you’ve already heard it was very cold.  And Pennhurst is eerie, but I found that advantageous to embrace it as a performer, rather than run away from it.

After I wrapped the movie, the challenge was being able to completely let her go. I had really gone to the depths with her, with that character. Without giving anything away, I believe where we leave Sister Rose at the film’s end is interesting. That may be part of why it was hard to disentangle.

How did you prepare for the time period or conduct research?

I’ve been involved with this script in some capacity for years. So, I definitely learned a lot about what a nursing nun is. And talked to family members, (like my grandmother who is still a very active Catholic or with my mom), about what the Church was like then. I knew we weren’t going to have a lot of time to rehearse when we got onto the set, so I wanted to make sure I was very well-prepared going into it.

As far as technical acting preparation, I worked closely with Claire Chubbuck of Ivanna Chubbuck studio for the months leading up to filming. Claire continued to support me while I was on set, working remotely. We utilized Ivanna’s teachings as well as Claire’s technique ‘cathartic realism,’ which is a new and fascinating approach to the work.

What are several reasons that you want my readers to see Impuratus?

It’s an incredibly fun and scary ride. If you like horror, you’re going to love this movie. Also, if you’re anything like me, you will appreciate the puzzle aspect. Where after the credits roll, you are left to wonder, “Oh wait, is that how it all comes together?” But the person next to you may have a completely different interpretation.

Impuratus, from Thundersmoke Media, is slated for a March 2023 release. 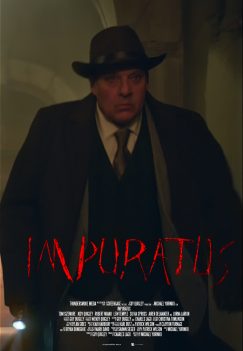