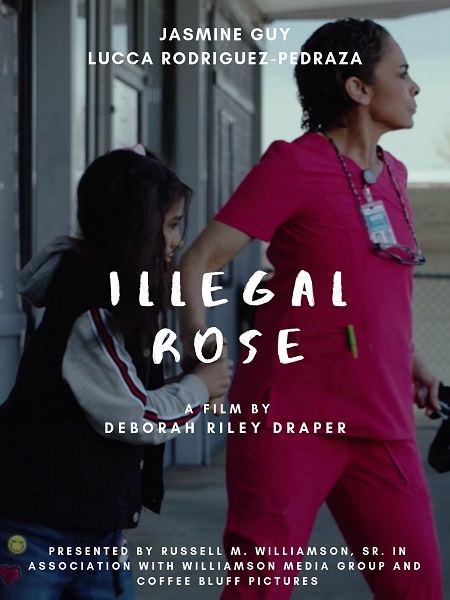 Los Angeles, CA (The Hollywood Times) 12/08/2019 – “The immigration conversation is not a monolithic conversation and the American people, especially people of color, have a lot of different origin stories. We don’t see the full spectrum of stories, voices, and concerns in the immigration debate.”- Deborah Riley Draper.

In the film, Illegal Rose, director, Deborah Riley Draper removes the divisive rhetoric and enters the perspective of an American American woman from the South into the conversation.

Illegal Rose is a short film about an unlikely friendship between Rose, a tired, disengaged, almost retired nurse’s aide who accidentally kidnaps Sylvie, a 7-year-old ICE Detention Center runaway on the 4th of July. Inspired by Langston Hughes’s short story, “Thank you, ma’am,” Illegal Rose explores respect, decency, and kindness through the eyes of two people of different generations, ages, races, and legal status, as they navigate their choices and the consequences. The story reminds us that we are all human and no human being is illegal.

When did you discover your love for filmmaking?

Deborah Riley Draper: I remember volunteering to create a play during vacation bible school before I was even in the first grade. I did not realize that I was directing, but I was getting everybody to play make-believe with me and the story I made up. The teacher thought it was great. Fast forward a few years into my advertising agency career, I had the opportunity to write a script that Francis Lawrence would direct. On set, I was completely engrossed in the process and knew that I wanted to direct and create stories through my gaze. A few years after that, I stumbled upon the story of the black models who broke barriers and changed the fashion world one night at the Chateau de Versailles in 1973. This story became my first film.

​What are you best known for?

You have spent your life championing causes. What are you most proud of?

Deborah Riley Draper: As a result of the Olympic Pride, American Prejudice film, for the first time since 1936, the 18 African American athletes were remembered and honored during a visit to the White House where their families had the opportunity to meet with President Obama and First Lady Obama and attend a screening of the film Olympic Pride, American Prejudice at the National Portrait Gallery. This was the first time that many of the families saw archival footage from the era featuring their loved ones.

​​What did you learn from the film?

Deborah Riley Draper: I learned to trust my instincts and the set experience can and should be inspiring and not stressful. And I loved how incredible I felt looking out on the set seeing women and people of color in almost every crew position. This was not intentional but a result of getting the best people available.

​What would you like the audience to take away from this film?

Deborah Riley Draper: The immigration conversation is not a monolithic conversation, and people of color have different origin stories. Yet, we don’t see the full spectrum of stories, voices, and concerns. When we peel back the politics, we see people. And when we see people, we should feel empathy. No human being is illegal and we should always be both human and kind.

Deborah Riley Draper: The biggest challenge was putting together a shooting schedule that worked with Jasmine’s Grey’s Anatomy schedule and Lucca’s elementary school schedule. Raising money is always a challenge but never a deterrent.

We filmed a scene with a few dozen extras staging a protest against the ICE Raids and the energy and the passion from extras touched them in ways they didn’t expect. We all realized that the chant is powerful and true; “Build LOVE not a wall.”