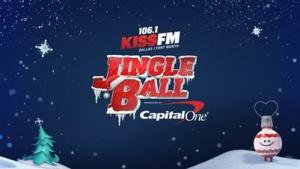 Charlie Puth stole the show for his second consecutive Jingle Ball tour appearance, fearlessly playing the piano and performing a new song he noted he “just finished writing a few weeks ago.”

Pop icons Backstreet Boys performed their anthem “Backstreet’s Back,” leaving the fans on their feet and yearning in nostalgia for more 90s hits.

DJ duo The Chainsmokers closed out the night and were later joined by Daya for a pyro-frenzied performance of their hit song, “Don’t let me Down.”

106.1 KISS FM’s iHeartRadio Jingle Ball 2016 is the first stop of the national iHeartRadio Jingle Ball Tour, the season’s biggest annual music event that captures the holiday spirit of the iHeartRadio app, in Dallas, San Francisco/San Jose, Los Angeles, Minneapolis, Philadelphia, New York, Boston, Washington DC, Chicago, Atlanta, Tampa and Miami. The concert also donated $1.00 of each ticket sold to Kidd’s Kids — non-profit organization, which is dedicated to helping children with a chronic or terminal illness or are physically challenged, by sending them on an unforgettable adventure to Walt Disney World®.

Images are below – we would love for you to include in your coverage! Please let us know if you need any additional photos or information.

Sunshine Sachs on behalf of iHeartMedia

About iHeartMedia Dallas/Ft Worth:

iHeartMedia Dallas/Ft Worth owns and operates KHKS FM, KEGL FM, KDGE FM, KZPS FM, KDMX FM, and KFXR AM and is part of iHeartMedia. With over a quarter of a billion monthly listeners in the U.S. and over 85 million social followers, iHeartMedia has the largest national reach of any radio or television outlet in America. As the leader in multiplatform connections, it also serves over 150 local markets through 858 owned radio stations, and the company’s radio stations and content can be heard on AM/FM, HD digital radio, satellite radio, on the Internet at iHeartRadio.com and on the company’s radio station websites, on the iHeartRadio mobile app, in enhanced auto dashes, on tablets, wearables and smartphones, and on gaming consoles.

iHeartRadio, iHeartMedia’s digital radio platform, is the fastest growing digital audio service in the U.S. and offers users thousands of live radio stations, personalized custom artist stations created by just one song or seed artist and the top podcasts and personalities. With over a billion downloads, iHeartRadio reached 90 million registered users faster than any other radio or digital music service and even faster than Facebook.

Capital One Financial Corporation (www.capitalone.com) is a financial holding company whose subsidiaries, which include Capital One, N.A., and Capital One Bank (USA), N.A., had $221.1 billion in deposits and $339.1 billion in total assets as of June 30, 2016. Headquartered in McLean, Virginia, Capital One offers a broad spectrum of financial products and services to consumers, small businesses and commercial clients through a variety of channels. Capital One, N.A. has branches located primarily in New York, Louisiana, Texas, Maryland, Virginia, New Jersey and the District of Columbia. A Fortune 500 company, Capital One trades on the New York Stock Exchange under the symbol “COF” and is included in the S&P 100 index.

At Kidd’s Kids, the primary goal is to provide children (ages 5 to 12), who have a chronic or terminal illness or are physically challenged, with an unforgettable adventure.  Throughout the year, the organization works hard to raise the funds necessary to send these special kids on an all-expenses paid, fun-filled, vacation to Walt Disney World® in Florida. Most of the funding comes from donations made by listeners to The Kidd Kraddick Morning radio show, corporate sponsors, and various fundraising events.