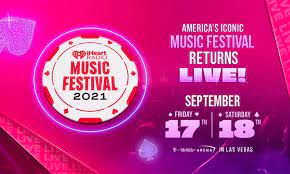 The CW Network will broadcast the two-day televised special on October 2 and 3, and exclusively livestream the mega-concert via the CW app and CWTV.com.

The CW Network Will Broadcast the Two-Day Televised Special on October 2 and 3, and Exclusively Livestream the Mega-Concert via The CW App and CWTV.com

“This year’s Festival will be historic for many reasons,” said Tom Poleman, Chief Programming Officer for iHeartMedia. “Not only will it be the first time all of these artists are together on the same stage, but also because it’ll be in front of a live audience. We’ve all been waiting for this moment – live music is back, and we’ll be celebrating like never before.”

Each night, the 2021 iHeartRadio Music Festival will broadcast live for fans via iHeartMedia radio stations throughout the country across more than 150 markets. The CW Network will broadcast a two-night television special on Saturday, Oct. 2 and Sunday, Oct. 3 from 8 p.m. – 10 p.m. ET/PT. In addition, The CW will exclusively livestream both nights of the festival via The CW App and CWTV.com.

“Live music has returned to America, and we are celebrating with our most diverse lineup of superstar artists in our 10-year history,” said John Sykes, President of Entertainment Enterprises for iHeartMedia. “We are excited to bring this historical event to fans on iHeartRadio stations across the country, the CW Network and CWTV.com.”

In addition, throughout a summer-long on-air and online promotion, iHeartMedia station listeners across the country will have the chance to win an exclusive trip to Las Vegas where they will join thousands of other dedicated music fans to experience the 2021 iHeartRadio Music Festival at T-Mobile Arena.

Proud partners of this year’s event include: Capital One, The CW, Rohto® Cooling Eye Drops, Sprouts Farmers Market, T-Mobile, Advil, Excedrin and Voltaren, with more to be announced.

The 2021 iHeartRadio Music Festival is co-produced by John Sykes and Tom Poleman for iHeartMedia; and Michael Dempsey for Dempsey Productions.

Artists and/or event are subject to change or cancellation without notice.

iHeartMedia, Inc. [Nasdaq: IHRT] is the leading audio media company in America, reaching over 250 million people each month. It is number one in both broadcast and digital streaming radio as well as podcasting and audio ad tech, and includes three business segments: The iHeartMedia Multiplatform Group; the iHeartMedia Digital Audio Group; and the Audio and Media Services Group. Visit iHeartMedia.com for more company information.

At Capital One we’re on a mission for our customers – bringing them great products, rewards, service, and access to unique and unforgettable experiences they are passionate about. Capital One is a diversified bank that offers products and services to individuals, small businesses and commercial clients. We use technology, innovation and interaction to provide consumers with products and services to meet their needs. Learn more at capitalone.com/access.

THE CW TELEVISION NETWORK launched in 2006 as America’s fifth broadcast network, with programming targeting younger viewers, a demographic highly sought after by advertisers. The CW, a joint venture between Warner Bros. Entertainment and CBS Corporation, now broadcasts across the week, offering fourteen-hours of primetime programming, Monday through Sunday, beginning in Fall 2021. The CW’s primetime programming is also available to stream for free, without authentication, on the ad-supported cwtv.com and The CW app, now available on every major OTT platform. Additionally, The CW broadcasts a three-hour Saturday morning kids block.  The CW’s digital network CW Seed launched in 2013 and offers original short-form digital content as well as past seasons of fan-favorite television series. For more information about the network and its programming, visit www.cwtvpr.com.