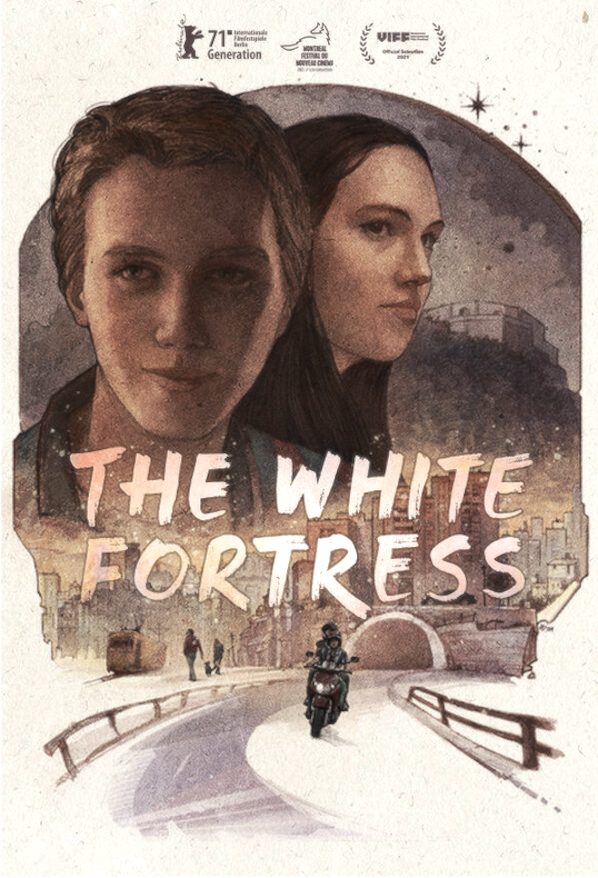 Los Angeles, CA (The Hollywood Times) 12/8/21 – Screening in time for Oscar consideration is a film from Bosnia-Herzegovina – The White Fortress (Tabejia, 2021), a Bosnian-Canadian co-production directed by Igor Djilcaca. The director was born in Sarajevo but left the city as a boy with his family during the war with Serbia in the 1990s and ended up in Canada where he lives now. The film is a moving portrait of doomed first love in Sarajevo, a city with significant social inequality since the 1990s when the middle-class became increasingly impoverished after the collapse of the former Yugoslavia. Tabija (The White Fortress) sits somewhere between a fairy tale and a crime thriller. The former’s atmosphere, when the action slows down to capture a sunrise on an almost-isolated hilltop, is where the film soars. The teenagers’ common ground is found in their dreams and imagination, even when their social experiences are so vastly different. The screening was followed up with an informative Q&A with director Igor Djilcaca, who pointed out that young people generally see no future in their country and try to emigrate at a considerable rate.

The love-across-the-social-divide narrative is hardly new, but writer-director Drljača (The Waiting Room, The Stone Speakers) turns familiarity into an advantage. Along with a gently intense performance from pale-eyed rising Balkan star Pavle Čemerikić (No One’s Child, The Load), it allows him to pay attention to the textures and rhythms of this very specific setting, knowing the mythic overtones of the Romeo-and-Juliet storyline will create their own momentum. We get a sorrowful little love story that is also a touching portrait of a generation trapped in their nation’s divided present, which is itself a legacy of its troubled past – alluded to here in excerpts from the 1972 film Walter Defends Sarajevo about a band of Yugoslav partisans during WWII.

The teenage boy Faruk (played by Pavle Čemerikić) feels stuck. He lives in one of Sarajevo’s poorest neighborhoods with his ailing grandmother, who spends much of her time watching a video of Faruk’s dead mother performing as a concert pianist in the 1990s before the war. Faruk strikes out with older family members’ semi-legal dealings in an attempt to inject some excitement, if not escape, into his life. When not working with his uncle scavenging scrap metal, he shoplifts, gets recruited into petty crime schemes by his brash friend Almir (Kerim Čutuna), and uses his offbeat charm to seduce girls. But all his street-smarts belie a tenderness underneath, that comes out when he’s sent to pick up Milena (Farah Hadžić) a trash-talking teenager who has been procured for prostitution by Almir’s ruthless boss Čedo (Ermin Bravo).

One such money-making endeavor brings Faruk into the path of Mona (Sumeja Dardagan), a teenager from an affluent, English-teaching school on the city’s outskirts. She has a path abroad mapped out by her affluent family, but one summer remains for exploration. Faruk’s softer side further reveals itself when he bumps into quiet, pretty Mona accidentally at the mall, tries some of his pick-up pattern on her, and gives her his number. Unexpectedly, she calls. Mona lives a far more cosseted life but she too has her reasons for wanting to escape – and a movingly delicate relationship springs up between these two young people with ostensibly nothing in common.

There are three white fortresses that neatly demarcate the divides so evocatively drawn in Igor Djilcaca’s The White Fortress, recently named Bosnia and Herzegovina’s submission for the 94th Oscars. There’s the grim, encircling tower block in which scrappy low-level hustler Faruk (Pavle Čemerkić) lives with his grandmother. There’s the modernist dream home perched on a hill that belongs to the wealthy, distant, politically corrupt parents of teenager Mona (Sumeja Dardagan). And there’s the famous late-medieval White Fortress, or Bijela Tabija, the national monument that overlooks Sarajevo, where Faruk and Mona spend a single night of their doomed romance in an embrace that inevitably dissolves in the cold light of morning.

The sincerity of its blossoming, fleeting romance makes up for underdevelopment elsewhere. Pavle Čemerikić and Sumeja Dardagan are naturally charming and have easy chemistry through both characters’ different styles of confidence – Faruk’s out of necessity, Mona’s discovered by chance. Their love is predictable, but it takes on shades of destiny against Sarajevo’s many identities. With a continual piano score under their momentary escapes, it is almost possible to believe in a mythical golden valley just over the next hill.

On one of their chaste little dates, Faruk and Mona find themselves on a road through a forest in the failing light of evening. To Mona, it looks like a fairytale; to Faruk, like a horror movie. They are both right, and the sad, wise heart of Drljača’s small, impressively controlled film condemns neither of them but instead understands what horror stories and fairytales have in common: both are narratives in which the characters have no control, and are instead propelled by forces far bigger than they are, toward destinies they were born into that they cannot avert.