HOLLYWOOD, CA (The Hollywood Times) 7/24/22 – Playwright Steven Levenson’s If I Forget was originally produced in New York in 2017, and the only reason I can think of that’s it’s not a better known work is that Levenson also wrote the book for Dear Evan Hansen, which came out the same year. Levenson overshadowed himself.

Levenson was barely 30 at the time, by the way. Feel free to be embarrassed by your accomplishments. I am.

The good news is, Jason Alexander — yes, George Costanza from Seinfeld Jason Alexander — rediscovered the play and mounted it at the Fountain Theatre in East Hollywood. It’s as compelling and relevant today as it was 5 years ago, possibly more so, as it is a play about the ways in which our yesterdays inform our today.

“The past is never neutral and history is never settled,” says Levenson, and this is a deep dive into the ways we grapple with our history, our culture, and our relationships. Oh, and it’s funny — if you can handle “Mein Kampf” delivered as a punchline, and are prepared for a lecture about the politics of falafel.

There’s lots of Jewishness in American theater — the joke is that old Jews and young gays are the only thing keeping theater alive — but it’s not like there are many plays about being Jewish. This is that play. And if you don’t relate to being Jewish, it’s also a play about being a brother, a sister, a husband, a wife, a parent, a child… you’ll hear yourself in there somewhere.

“Do I have to pick a side?,” asks the middle brother, mid-argument. “Are you new to this family?” snaps his big sister. 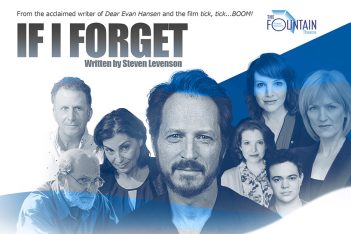 These are 20th Century “sweet and sour shrimp” Jews, the kind of secular Jewish family that defined liberal Democrat for Lou’s whole lifetime… until it didn’t. This is a story about remembering the Holocaust, about forgetting the Holocaust, about what we owe Israel (the title is from Psalm 137: “If I forget thee, Oh Jerusalem …”), what we owe our parents and our children. It’s also about catching your boyfriend shtupping the cantor on your bed and wondering how much it will cost to dry clean the duvet.

The weight of this play rests mainly on the shoulders of Leo Marks as Michael, who delivers powerful monolog after powerful monolog, deep and intense think-pieces presented at the pace of screwball comedy. It’s a high-wire act and most actors would fall over into either ponderousness or parody if they could even memorize the dialog. Marks plays it perfectly — think Mr. Smith Goes to Washington, but Jimmy Stewart is from Brooklyn.

The stakes of the story are not world-shaking, except to the people in it. Michael’s provocative new book is provoking people, and his tenure is at stake. His daughter Abby is in Israel on her birthright trip, and her parents are afraid for her. Sharon resents big sister Holly because Sharon does all the heaving lifting. There are money issues, and very different ideas on how to solve them.

“What are we going to inherit?” pouts young Joey as the grown-ups divvy up the pot. But that selfish outburst is, in its way, the theme of the play: What do we inherit, we Jews of the 21st Century? What is our communal memory when there is no one left alive who saw Dachau, as Leo did. What does it mean when an “immigrant neighborhood” is people speaking Spanish, not people speaking Yiddish?

The 2 1/2 hour show moved surprisingly quickly, ending with an emotional audience giving a sincere standing ovation. The only part that didn’t work was director Alexander’s conceit of using a histrionic dancer (Caribay Franke) to cover set changes. She presumably represented both the shtetl and the absent daughter, but she came across like outtakes from a Sia video. Ignore her. Everything else was great. Here’s hoping they mount this at a larger hall after its run at the Fountain, so that more people can have more interesting post-show conversations.