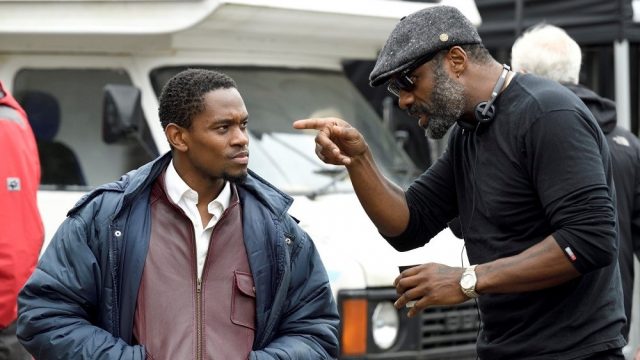 “…Idris Elba’s directorial debut takes us down two paths: The Righteous and The Damned. Which one we choose determines the outcome of our lives or does it…”

Set in 70s Kingston and 1980s Hackney (a neighborhood in London with a large Jamaican community), Yardie, based on the best-selling novel by Victor Headley, centers around the intertwined worlds of the Jamaican narcotics syndicates and the music industry, following a young courier named ‘D’ (Aml Ameen, The Maze Runner) to London where he seeks revenge for his brother’s murder and also reunites with his estranged girlfriend (Shantol Jackson, TV’s Thicker Than Water) and child.

The film starts out with a boy in a Jamaican village and the path he must choose; Righteous or The Damned.  A war in the streets for control was going on… Two rival gangs… innocents killed and caught in the crossfire.  D, a boy and his brother, Jerry Dread, tries to use his music to bring people together… in no man’s land a very dangerous place between the two gangs’ territory.  Music is the universal language…  A gathering is something that everyone needed. Two brothers… Jerry, the older, D, the younger, learning and admiring his older brother as he is truly the “Peacemaker!”

King Fox and Skeets, the leaders of the two rival gangs shake hands because of Jerry.  Then, tragedy!  Jerry is gunned down.  Now as ‘D’ grows up, he works for King Fox, head of a record company.  D was given a choice a path to take and was introduced to Foxes other side of the business… The path of The Damned or Righteous…  D grew up, married, and had a child with his childhood sweetheart as well as dealing with their absence and the memory his late brother.

D struggles with his past and trying to make something of himself but finds he descends into the side of “The Damned” and his choices bring him face to face with his past.

Off to London and now as a dealer’s “courier” with more choices, more consequences or perhaps he sees opportunity in “The Damned.” D gets to see several paths on his journey, and he begins to like what he sees. He’s with his wife and child in London but the consequences of his other paths, other choices, slam right into him and now he’s faced with a new choices and new paths that not only affect him but his family.  It’s all about the choices we make in our lives and how we deal with the outcome of those choices.  D tries to emulate his brother, which is all he ever wanted: The music, the peace he so sorely sought.

It’s a story about the human condition, the way we suffer because of what we do in our lives. Idris Elba not only is a great actor but, in this film, he takes it to the next level and directs what I believe is a compelling story about life.  The life of any one of us.  We seek peace and happiness and we’ll do almost anything to achieve it. But we hold grudges, we carry with us the pain of our past, but we fail to just let the past go and move on.

Idris paints for us a story, one story, in the life of humanity.  When we need help and we refuse to let go of the grief and trauma of our past, we are left with only one thing, to hold onto that memory and that simply tears us apart.  Idris makes this point clear.  We need to rely on others for help and sometimes that help is something we don’t have to ask for.  But are we willing to accept it?

Now 10 years later, the message is: No More War in the Ghetto… the exact same thing that D’s brother promoted… music, DJ’ing as The Peacemaker in no man’s land. The final thought I have is what I saw in this wonderful film is: What if the choices D had to make was to go down both paths to see exactly what he needed to find the final path he needed to take to make his life complete?

I believe that we all make mistakes and sometimes need to fail in our lives. But mistakes are part of gaining experience and fail equals: First Attempt in Learning.  Idris directed this film, for me at least, in that way.  There is pain and sometimes we have to choose between two pains. Which path is more painful: The Righteous or The Damned?  This is a great film for Idris’ directorial debut.