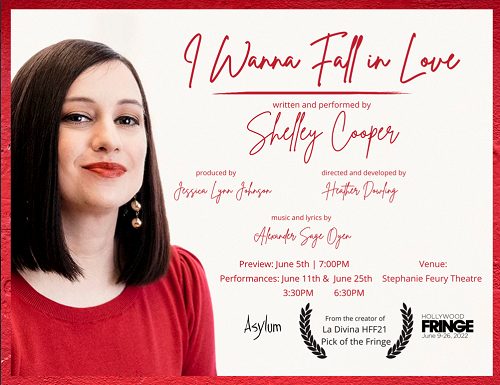 On Saturday, June 11, 3:30 pm, there was a performance of a new show I Wanna Fall in Love, featuring the talented Shelley Cooper at the Stephanie Feury Theatre on Melrose – as part of this year’s 2022 Hollywood Fringe Festival. Shelley is an accomplished actor and vocalist, whose stage presence is captivating.

In this brief one-hour production of narrative and song, Shelley Cooper recounts her own journey through romantic relationships with men. In this cleverly written and produced one-woman show, Cooper asks us to consider: Why would anyone want to fall in love? What’s the payoff? Why would any sane person put themselves through this? Do we steer clear? A lot of questions and it is worth hearing Shelley’s take on the subject in this production of a rollercoaster of romance. The story starts where any romance should, middle school and works its way to the present. Alexander Sage Oyen’s music is contemporary musical theatre at its best, weaving a folk/indie melody line, with lyrics that are vulnerable and insightful.

Beginning with her crush on a boy in her 6th grade class, Shelley explores her attempts at finding a boyfriend in high school and college, but it was not until she finished college that she finally met a man with whom she truly believed she was in love after they met in a graduate acting workshop. Interspersed between her accounts of love attempted and lost, Shelley offers musical reflections on the situations. She relates some amusing stories about men she met in her 20s, one of whom was a German man who she described as very handsome but typically German in his directness.

She attempted online dating back in the days of AOL, but somehow that turns out to be a massive disappointment full of bizarre self-projections on the part of men. Eventually, she decided to take a job in Thailand teaching acting workshops and there she had a brief affair with a handsome Thai actor. Some of the break-ups she recounts are quite amusing in retrospective – providing a great deal of humor in her telling. But ultimately, Shelley’s biggest self-discovery occurred much later, who she began to realize that one must love oneself first. One should not go searching for love, but it just might happen along the way.

At the helm of this production of I Wanna Fall in Love are award-winning artists at the top of their fields from all over the country! The musical show was written and performed by Hollywood Fringe Favorite Shelley Cooper, creator of La Divina: The Last Interview of Maria Callas, the winner of several awards last year. Music and Lyrics for the production are the work of Alexander Sage Oyen (NYC), winner of the 2014 ASCAP Foundation’s Lucille and Jack Yellen award for lyricists. I Wanna Fall in Love was directed and developed by Heather Dowling and produced by Jessica Lynn Johnson, one the most accomplished directors of the Hollywood Fringe Festival and CEO of Soaring Solo Studios. The live piano stylings of the show are performed by Off-Broadway award-winner Michael J. Gonzales.

There is an additional performance of Shelley Cooper in I Wanna Fall in Love at the Stephanie Feury Theatre, 5736 Melrose Avenue in Hollywood on June 25, at 6:30 pm. Tickets are $12.00. For tickets, go to: https://www.hollywoodfringe.org/projects/7517?performance_id=20081&tab=performance 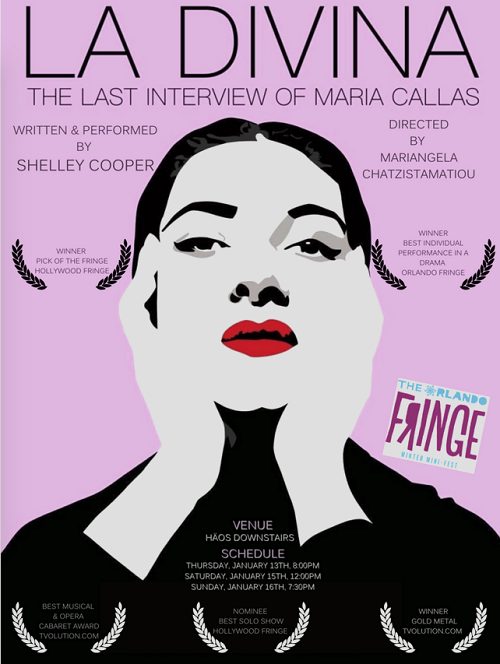