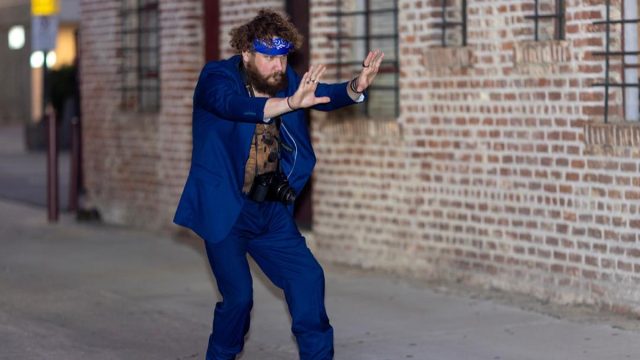 Filmmaker Noah A. Waters III is in a class by himself, and his latest movie, Relationship Killers, is a prime example of his unique talent.

The dark character-driven, yet romantic suspense thriller is about two women with a dark secret. They are nearing the end of their second year of marriage, and though they still love one another, the excitement of being newlyweds is starting to wear off. When we first meet them, they seem to be a normal married couple.

Bedegraine is a Native American; a prim and proper woman who values organization and tidiness. Bravien is a Black-British woman who would prefer not to be bothered by others and keeps to herself.

The couple gets into several quarrels that Doctor Dee shuts down again and again in increasingly demeaning manners.

As the couple grows more and more aggravated with the good doctor, they begin to drop hints that they are serial killing assassins with varying degrees of psychosis.

The couple is in a much better place romantically by the end of the film…but what about Doctor Dee?

Lisa Lindo of the Milan International Film Festival said, “Great debut for the Lethal Ladies franchise. Just when you think the story will zig, it goes bang. [I] Can’t wait to see the next one!”

Read on for how Noah A. Waters III crafts his screenplays and direct his movies, how he feels the stories are so compelling and why we want to go on this ride with him.

How long have you been making movies?

Noah A. Waters III: Some 15 years. I started as a peon and worked my way up to line producing but writer-director was always the goal. But I didn’t know it was going to become a reality until about 2-3 years ago.

What is going on with your film, Relationship Killers?

It won some awards, which is nice, but something that I don’t really care about. What means the most to me is that people understood it and got the film noir tone because the material was so near and dear to my heart. It’s always a risk, we see where some films have died on the playing field.

A few times I had the opportunity to sit in the audience it was very special to me. They understood it and the questions after were exciting. It is a huge joy in my life, to see a project I’ve worked on for so long and characters I care about; it meant a lot.

Tell me more about Relationship Killers.

Filmmakers are constantly making short films as a “proof of concept” for a feature or a show idea that they have. For me, Relationship Killers is more of a proof of character.

I wanted them grounded in allegorical backstory, and what better way to introduce them to the world than by creating a little origin story of sorts that just barely dips our toes into the power behind these fierce, flawed, and formidable characters.

Also, Mental Health and Mental Illness work their way into most of my work, and for Relationship Killers, what is a better way to dive deep into the psyche of two guarded lovers than by making them share in their first session with a marriage counselor?

What is important to you to stress during your movies?

High-quality characters allow me to include diversity and inclusion throughout my films, which also focus on social issues without being preachy, virtue signaling, nor forced.

Now because of that success, I will continue to work in the same world with the film Lethal Ladies, a very dark character-driven cinematic universe film noir in the same world. Intriguing and joyful to get to partner with actors and talk to them about characters and work on multiple films that cross storylines.

My next step for the cinematic universe is to work on two features; Deceit – a typical suspense thriller with social issue elements that are not central to the film. This is a very passionate hate letter of mine to narcissism with toxic masculinity. We have seen a lot of characters show what narcissism is.

What changed for you work-wise with Relationship Killers?

I struggle with depression and mental illness pretty several. I have always wanted to write and direct and succeed as a line producer. With Relationship Killers, I have proved to myself and the industry that I can do it. The individuals who partnered with me on that film loved the results of high-quality cinema, I can manage a budget, and work with actors in an emphatic way because of my joy for theater and the love of the cast and crew.

What kept you going during tough times?

I stay in therapy. I work with a psychologist and a psychiatrist, who manage my meds.  I want to put a very honest and authentic nuance on mental illness in my work is helpful. I write characters who suffer from different mental and emotional illnesses but are still diverse and fully fledged bringing light to individuals who haven’t seen themselves portrayed on screen before.

Tell me about your background.

I am from Northeast Florida and I have been all around the world. I served in the U.S. Army and was a mercenary for multiple different private military outfits. I am a 32nd-Degree Master Freemason, a knighted member of the Knights Templar, and a knighted member of both York and Scottish Rites.

I am a member of Veteran’s In Media and Entertainment, the Hollywood American Legion, and Film Independent. I studied writing and directing for screen and stage in college. Besides stand-up, writing, and directing, I am a line producer and combat consultant for film and television.

You are actively involved in scholarships and mentorships. Why is this important to you?

With my productions, I want to be able to prove to the industry it’s not always a public relations stunt. We have this as a tax write-off. I want to show that it is a smart business move, and extremely valuable for those seeking the training – the morale on set is so much higher when people enjoy coming to set. Indie volunteering and taking off from their day job.

I want to make a safe and nurturing learning environment and experience what a full fledge working set is like. Production assistants and interns are just free labor, most of the time they are running to get coffee and not in the thick of it watching it and how they are creatively solving problems, which is the most important.

What are some of the high points of your recent success?

Being able to work creatively in a medium that allows me to express the diversity of mental illness while allowing me to participate in my own therapy of story-telling is good for my mental health. I hope I can continue that. At the end of the day, it’s still about people who suffer and also have all of these other aspects of their character. It’s not just depression or anxiety. Their mental illnesses and how they manifest them are equally as diverse as the characters themselves. I personally love storytelling and filmmaking, the worst day on set is better than the best day at home feeling sad and alone.

Please tell me more about this.

I also want to create an opportunity for those who wouldn’t have the opportunity to learn on set on the job and not to be put in debt, positive effects, and fiscally sound through the partnership with the nonprofit these monies are tax deductible. It’s not money being thrown away and it’s not time and talent being wasted on a volunteer leaving to make copies or get coffee. Being able to recognize the talent that is hard working, high quality, and enjoyable to work with. I want to recognize them early and foster their careers by being biz smart and doing some good in the world.

One of my passions is helping other filmmakers and inspiring people in the industry because I had such a hard time getting started myself. I partnered with the new Hollywood movement and The Writers Room 50/50 to open some mentorship opportunities on set. I wanted them to experience what it is like to be on a union set. I raised some money for scholarships so I could pay them a day rate and give them a place where they are learning from the crew and they can hop around to various jobs. They don’t have to work in grip or camera the whole time, but instead try production, electric, and other areas. It is truly exciting for me to help people who got their start.

Why do you want readers to see Relationship Killers?

It is a high-quality film and there have been many people who enjoyed the experience of seeing the movie and others who enjoyed making the movie and want to work with me again and again. It helps open doors to meetings and pitching in Hollywood I can do that from more of a more powerful position than someone who hasn’t done anything. It has also won multiple awards since its premiere at the TCL Chinese Theater.

For more information reach out to Noah A. Waters III at  https://linktr.ee/NoahAWatersIII