Pasadena, CA (The Hollywood Times) 5/16/19 – ‘Respect is not debatable, there is no such thing as normal,’ says the most renowned sex therapist in the country- Ruth Westheimer also known as Dr. Ruth in a new documentary Ask Dr. Ruth directed by Ryan White, released earlier this month.

Her media career began in 1980 with the radio show Sexually Speaking which was on air for a decade and gained huge popularity in puritanic America. She also hosted several live television shows and on top of that she’s an author of approximately 40 books on topics about sex and sexuality. [1]

The documentary however shows us some aspects of Dr. Ruth’s life not many of us knew- her being a Holocaust survivor, losing her parents at a very young age, fleeing to Switzerland, growing up at an orphanage, following her dream and moving to The United States, being a single mom, finding and then losing the love of her life.

Incorporating animation with candid interviews with Dr. Ruth the makers of the documentary show us the horrific outcome of the Nazi regime which made Dr. Ruth’s Jewish orthodox parents send her away from Germany at the tender age of ten to save her life and how her strength and hunger for education and never ending ability to hustle helped her to survive and become one of the most iconic people in American history. 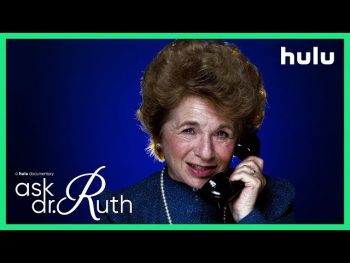 Approaching her 90th birthday, there’s no sign of her slowing down- Dr. Ruth is always on the move- still teaching, making appearances and writing. ‘Get yourself out there and meet people,’ she cheerfully says in her thick German accent.  Indeed her energy and positivity, especially keeping in mind, everything she’s been through, is admirable.

It’s also worth mentioning that back in the 80s when AIDS epidemic was at its peek and most of people avoided to talk about it, she was the one who didn’t shy away from the discussion- even more so, she advocated for the LGBTQ community back then and years later.

Despite all the success in her career and private life she’s seemingly carrying a heavy load of loneliness- loosing parents at a young age and then later in life loosing her partner of 36 years leaves a very heavy mark and as her kids mention in the documentary that probably Dr. Ruth’s unstoppable desire to work and keep engaged in as many activities as possible is her coping mechanism. And if it is so then it’s not the worst way how to cope because she has truly lived a wonderful life and left an incredible legacy. As she says, ‘German Jews don’t cry in public.’