Los Angeles, CA (The Hollywood Times)  1/19/2021 — I fell in love with Bridgerton because it thrusts the viewer into a fantasy world filled with lavish balls and clandestine love affairs, Victorian aristocrats, and it showcased a diverse cast.  While I love that Netflix showcased a diverse cast in an alluring fantasy world, it is important to think about how diversity is represented, especially since we continue to discriminate against people of color and women. Portrayed by actress Ruby Barker, Marina Thompson is a lead character of color in Bridgerton, and her pregnancy defines her character arc throughout Bridgerton’s first season. By examining how Bridgerton treats premarital sex, marital sex, and pregnancy, we can examine how racial stereotypes affect Marina’s portrayal.

Marina’s Character Arc
In order to understand how racial stereotypes impact Marina’s character, it is important to understand Marina’s character arc. Marina’s arc focuses on a young woman of color who moves into the Featherington household. When the show reveals Marina is pregnant, Lady Featherington, the woman entrusted with her care, immediately homebounds Marina. However, Lady Featherington attempts to trick an older man into marrying Marina, and to think Marina’s child was his. While Marina is unsettled about this idea at first, she decides to trick someone she liked into being the father of her child, only to reveal the secret afterwards, and, for this action, she suffers heartbreak. She then rejects a marriage proposal from the brother of the deceased father of her child because she thought she was not pregnant after drinking a tea. The season ends with Marina marrying this brother because she realizes she does not have any other options. 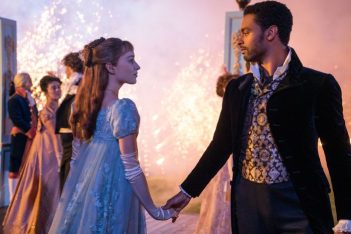 Premarital Sex and Bridgerton
Bridgerton navigates premarital sex with three characters: Anthony Bridgerton (brother of the protagonist, Daphne), Benedict Bridgerton (Daphne’s other brother), and Marina Thompson. Anthony and his girlfriend have sex several times throughout the series and stems from a secretive love affair. Likewise, Benedict has a three way with a seamstress and another woman in an underground sex party. In these cases, both Bridgerton brothers are able to have consequence-free sex and are able to enjoy their youth.
However, Marina never has sex on camera, but her arc is based on having premarital sex (her pregnancy) with her dead lover. The series portrays the Bridgerton brothers’ foray with premarital sex as youthful excursions; whereas, Marina’s experience is portrayed negatively. Interestingly, because she has premarital sex, Marina pays several costs throughout the series where she is physically isolated from high society’s balls for a majority of the series. Marina is also forced to marry someone out of necessity rather than love. Marina’s premarital sex and Marina’s pregnancy force Marina out of the glamorous high society because Featherington threatens her to marry for status and stability.
However, Bridgerton positively portrays martial sex, and juxtaposes marital sex with being able to oversee those in poverty. In Daphne’s arc, Daphne marries Simon, has marital sex, and becomes a Duchess that oversees poor communities (e.g. Daphne’s appraisal of pigs determined if their respective owners would get a contract).  Since Marina had premarital sex, she pays a cost throughout the entire season in ways White characters throughout the season do not. Thus, Bridgerton’s portrayal of marital sex marginalizes Marina’s character.
Thus, Bridgerton’s portrayal of premarital sex reinforces racial stereotypes of Black women, specifically the jezebel. The jezebel is a stereotype that hypersexualizes Black women, and, in Marina’ case, this stereotype costs Marina’s ability to navigate Bridgerton society. Even when Marina is not the only character that has premarital sex, she is penalized for having sex before marriage in ways other characters are not.  Her experience with sex homebounds her character, and she is also isolated from high society events. When Featherington forces Marina to marry a man she does not love, Featherington takes Marina to an impoverished part of Victorian society. Marina also “experiences poverty” because of her experience with premarital sex which contrasts with how other characters oversee poverty because they had marital sex. Thus, Marina is penalized for her sexuality, especially compared to others who engaged in premarital and marital sex. Bridgerton and Childbirth
In addition the premarital sex, Marina’s pregnancy is stigmatized through the theme of childbirth. Most of the Bridgerton teenagers are unaware of how pregnancy occurs. Daphne, the protagonist, is especially oblivious to the procreation process even though that was her goal throughout the second half of the season. Furthermore, when she does get pregnant, Daphne is not seen pregnant, but, rather, in childbirth. Marina is well aware of how pregnancy occurs (since she herself is pregnant).  In fact, news of her pregnancy prompts other characters to want to learn more about sexuality and procreation. Thus, white teenage women in Bridgerton are afforded innocence when Marina isn’t afforded this innocence. Even when Daphne has sex (which results in her pregnancy), that sex is sanctioned by Bridgerton society. The viewer does not see Daphne pregnant, and does not see her struggle to have children; whereas, the viewers see Marina’s struggle throughout the arc.
Thus, another way Marina is hypersexualized is that her character experiences pregnancy, and, through this experience, she gains knowledge of the process. While teenage women in Bridgerton’s high society prioritized having children, they were ignorant of the process because they did not have to carry a child throughout the season. Furthermore, while other characters valued having children, Marina’s child was not valued because she simply had the child out of wedlock. Thus, another way Marina is hypersexualized is through knowledge of childbearing itself.
Bridgerton’s efforts to spotlight diversity within its series can sometimes be fraught with problematic aspects of how Marina’s character was represented. Through the depictions of premarital and marital sex, Marina’s sexuality is regulated in ways other Bridgerton characters are not. Similarly, Marina’s experience with procreation information and the inability to show Marina’s childbirth demonstrate how Bridgerton negatively impacts Marina’s portrayal.  Ultimately, premarital sex, marital sex, and childbirth are portrayed through the racist trope of the jezebel. Thus, while showcasing a diverse cast, there can be times where some characters are portrayed negatively.