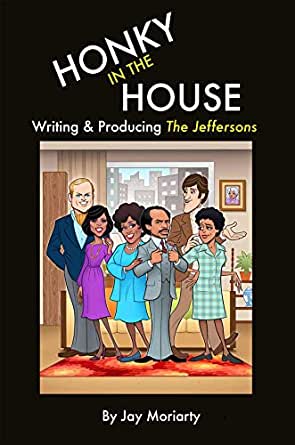 Los Angeles, CA (The Hollywood Times) 7/22/20–  Jay Moriarty just finished writing a book about his experiences Writing & Producing The Jeffersons titled, HONKY IN THE HOUSE.  https://amzn.to/2CwTy0x. It is a fascinating read about how The Jeffersons used comedy as a way to fight bigotry with episodes involving Interracial Marriage; Suicide; Sexism; Transgender Identity; the KKK; Kidney Transplant and MLK tribute.

More than any other series in television history, The Jeffersons showed that Black Lives Matter. As a Writer for this popular 70s comedy, explain why?

Before the 1970s, there were virtually no black people on TV. You’ll notice I dedicate my book, HONKY IN THE HOUSE, to the young black man who spoke to my all-white high school class and mentioned that growing up in the 1950s, the only time he saw people who looked like him on TV was when he’d see Tarzan being chased by natives in the jungle. He said he’d be yelling, “Look out, Tarzan, they’re right behind you!” When he should’ve been yelling, “Get that Honky!” The very subtext or theme of The Jeffersons when it first aired, and through its record-setting eleven-season run, was simply: Black People are People Too. Another way of stating the simple truth that Black Lives Matter.

The Jeffersons was the first sitcom dealing with Interracial Marriage; Suicide; Sexism; Transgender Identity; the KKK; Kidney Transplant and MLK tribute. How did The Jeffersons use comedy as a weapon to fight bigotry?

With the creation of All in the Family, Norman Lear proved you could combine comedy and drama in the same episode. Viewers like myself would find ourselves laughing one minute, and fighting tears the next. In dealing with meaningful topics like the ones above, The Jeffersons sought a balance of cogency and comedy similar to that of its spinoff parent. The mere presence of a successful, loving black family on TV every week was in itself an effective weapon for destroying racial stereotypes. And the mere presence of a happily married interracial couple (The Willises) was groundbreaking for television. As late as 1967, just eight years before The Jeffersons premiered, interracial marriage was still illegal in some states. In fact, in 1968, while singing a duet on a TV special, Petula Clark touched Harry Belafonte’s sleeve at the end of the song, causing a national controversy over “interracial contact.” As for comedy as a bigotry killer, a common comment in mail received from both black and white viewers made clear they “like that there is a group of both Black and White people with talent who can joke about color differences without being offensive.”

How can a white writer write for a black show?

The short answer is Research and Empathy. Not necessarily in that order. Pretty much the same way a gay writer could write for a straight character or vice versa. Or a man could write for a woman or vice versa. Or an actor who’s never killed anyone could play a killer. Or a black writer could write for a white show. In the book, I address this question in a six-page discussion, pertaining specifically to my experiences writing and producing The Jeffersons. Including an account of the time I was speaking to a group from the Watts Writers Workshop and a young black man asked that very question. And Sherman (Hemsley) happened to be crossing the stage and injected himself into the discussion.

The Reverend, Martin Luther King said, “We may have all come on different ships, but we are in the same boat now.” And he added, “Only in the darkness can we see the stars.” How is this ringing true today?

When The Jeffersons finished its run in the mid-1980s, I felt the country was well on its way to racial harmony. In 2008, when Barack Obama, a black man, was elected President, I, along with many others, shed tears of joy. It truly appeared to many that MLK’s dream was coming true. We were all about to overcome. If someone told me then that in another decade, Bill Cosby (my boss in the 1990s) would be in jail, Donald Trump would be President, and the country would have to be reminded that Black Lives Matter, I would’ve thought that person insane! But here we are in the Darkness. Will America finally find absolution for the original sin of slavery? Are we capable of finding ways to understand and eliminate Systemic Racism? Are Empathy and Unity concepts we can learn to embrace? These are serious questions. But as a comedy person, I’d like to think there is a way comedy can help. The very last line in the HONKY book is a quote from Maya Angelou: “Continue to allow humor to lighten the burden of your tender heart.”

Why is your book, “Honky in the House” important in understanding race relations in America today? Why is mixed casting so important?

I give credit to the play Hamilton for proving that what I would call “color blind casting” works. I hope I live to see the time when roles are cast according to talent and not color. I honestly think a black man could play Mark Twain, or a white actor could play Frederick Douglas, especially in a one-man show. Appropriate costumes and wardrobe, as in Hamilton, may help. It may sound crazy, but I’m also thinking the time is not far off when character will become more important than color. In other words, the best actor, regardless of race, gets the gig. I recall reading that at the current rate of what used to be called “miscegenation” (interracial marriage), by the year 2050, there will be no discernible difference in DNA makeup among the American population. When the time comes that most of us have someone of the opposite color in our immediate or extended families, color-blind casting will seem at least as ordinary as do same-sex couples now. You may recall, by the way, that in Shakespearean times, female characters were played by men.

What was your favorite scene in The Jeffersons?

I have many favorite scenes for many different reasons, but certainly one of the most powerful scenes was in the episode titled “Sorry, Wrong Meeting” where George Jefferson performs CPR on a KKK white supremacist (“Breathe, you bastard!”) and saves his life. When the Klan man’s son tells him that Mr. Jefferson saved his life (thru mouth-to-mouth resuscitation), the man responds, “You should’ve let me die.”

In your book, you speak of Archie Bunker, satire personified versus George Jefferson. Share your perspective.

Whenever I hear or read George Jefferson described as a “black Archie Bunker,” I cringe at the oversimplification. Sure, you could call each a bigot. But where Archie’s bigotry is pure prejudice, George’s bigotry is a reaction to prejudice. George doesn’t hate white people just because of the color of their skin. He hates that they kidnapped, raped, enslaved, and lynched his ancestors. In the chapter titled “George Jefferson vs. Archie Bunker,” I sum up the comparison of perhaps the two most iconic figures in American sitcom history as follows: Archie Bunker—At best, a lovable buffoon. At worst, an ignorant bigot. George Jefferson—At best, a hero. At worst, a workaholic intent on providing his family with not only the necessities but the finer things in life.

What was it like working with your idol Norman Lear who will turn 98 on July 27?

When I arrived in Hollywood, the current sitcoms were the likes of Green Acres, Petticoat Junction, and The Beverly Hillbillies. When, in 1971, I happened upon a new show called All in the Family, which tackled topics never before touched on in American sitcoms—race relations, homophobia, politics, religion—my first thought was ‘I’d give anything to write for this show!’ Later, when my writing partner, Mike Milligan, and I had the chance to work with Norman Lear, it was a dream come true. Who better to learn from? Norman knew how to get the best out of his writers. His mantra included gems like, “A second draft is like a memo around here.” “Dig deeper.” And, “This will re-write well!” We started as staff writers on The Jeffersons and continued movin’ on up to Producers and then Executive Producers/Showrunners.

Those years with Norman, when he had eight shows on the air and more in development, were super exciting. Coming to work, you never knew who you’d be seeing. Anyone and everyone, from Mike Wallace or Bill Moyers interviewing Norman, writers, and cast; to stars like John Wayne or Billy Dee Williams appearing as guest stars on a series; legendary musicians like Joe Cocker or the Beach Boys walking the halls; my idol and homey Muhammad Ali, whose first words to me when I was introduced as Executive Producer of The Jeffersons were, “You’re not as dumb as you look!”

Norman, by the way, is about to turn 98 and is still working every day. I visited Norman in March, right before social distancing started, in his office at Sony Studios. Norman and his current producing partner, Brent Miller, besides producing the new One Day at a Time series, have created, along with Jimmy Kimmel, what amounts to a new TV genre—LIVE In Front of a Studio Audience. In this past year, using original scripts from All in the Family and The Jeffersons, recasting the roles with prominent actors—Woody Harrelson as Archie and Jamie Foxx as George Jefferson—episodes were aired live to impressive reviews. Right before Christmas, an AITF episode titled “The Draft Dodger,” originally written by my partner and I in 1976, was aired. It remains one of the preeminent episodes of All in the Family. The original development, writing, and shooting of this script is covered in the HONKY book.

What do you want people to take away from the Honky in the House? Where can we find it?

HONKY IN THE HOUSE is a very personal story. I tell what happened to me after graduating from college and heading to Hollywood with high hopes of breaking into television writing. I’ve tried to make it the kind of book I wish existed at the time. A book that would explain to an aspiring writer various things he or she may want to know about writing and producing a TV series. It’s also a book about television history. A book focused on the so-called Golden Age of Sitcoms, when half-hour comedies like All in the Family, The Jeffersons, Maude, Good Times, Chico and the Man, The Mary Tyler Moore Show, M*A*S*H, Happy Days, The Bob Newhart Show, Laverne & Shirley, Mork & Mindy and more ruled the ratings. The book is available on Amazon and at most online book store outlets. Profits are donated to the National Underground Railroad FREEDOM CENTER in Cincinnati, Ohio, my home town.