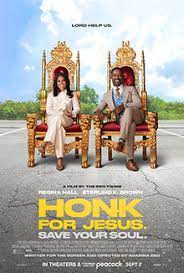 Los Angeles, CA (The Hollywood Times) 9/12/22 – Honk for Jesus, Save your soul is an uneven, but smart satire about organized religion. The film is funny, and intelligent half of the time.  The other half is a little too unfocused to do the same. The acting is top notch though with the two leads, Regina Hall and Sterling K. Brown. Ms. Hall plays the strong woman role to perfection. Hall as Trinitie Childs, gave me Hillary Clinton vibes.  Mr. Brown does a good job of playing the scandalized Mega church pastor Curtis Lee Childs.

The plot about the sex abuse scandal and the façade they use for the press was enthralling.  Honestly I would have nonstop gushed about it and  how creative this film was, if it was just about this.  My first thoughts on the film were: it’s a tutorial on how to handle a scandal. Have people in your congregation speak up for you, while you make it seem like you’re handling it in front of the camera. Fake it till it goes away.   This is the heart of this film. I loved how defensive the congregation was of their pastor. That gave Creflo Dollar vibes. Creflo Dollar is a huge influence on Sterling K Brown’s portrayal of Curtis lee Childs.  The scandal handling part of the plot is an amalgamation of   Creflo Dollar and Bill Clinton . The other  part of the plot is based on a huge church that  shall remain nameless.

Some noteworthy scenes here are the baptism scene where Trinitie holds Curtis Lee under water for an uncomfortable amount of time, and then they argue about which way to say “amen.”  I think that shows their relationship really well.  I think it shows she’s still mad at him, and wants more say in the relationship and the ministry. I loved the scene in the car when they lost the façade, and rapped to a song. 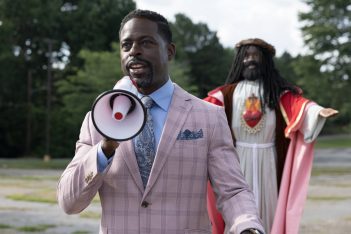 I thoroughly enjoyed the way Trinitie Childs was the voice of reason throughout the film. Women for the most part I think are more levelheaded than men, I’m speaking from experience. I’m a man.

If their focus would have been strictly on the heart of the film, this film would have been, dare I say, Oscar nominated. But, they focused on the appendix. They decided to focus on an ego driven one sided competition between the Childs and the other pastors.  The film dedicates the second half the time to this plot thread.   I was astounded at how disappointed I was. The film goes from Pastor Childs talking to one of his victims and kind of trying to get him to stay quiet, to a thread with no real world appeal.  The competition for how many souls a church has to its name should have no possible connection to this story. However, it was meant to be a satire about organized religion, and ego definitely plays a huge part in organized religion and mega churches. Mega churches are often competitive over their membership numbers. I might be giving this film too much credit but it gets a 3/5 from me. I did not like the ego thread, though I understand that it was necessary.  I just wished there was more of an attempt to flesh that conflict out.