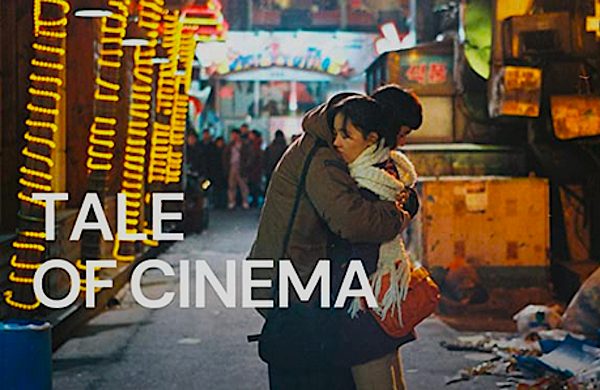 On Saturday, June 18, Acropolis Cinema presented a double-bill of early films by South Korean filmmaker Hong Sang-soo at the 2020 Arts & Archive Cultural Space on Broadway in Los Angeles. The evening program featured a screening of Nobody’s Daughter Haewon (2013) which was paired to Tale of Cinema (2005), Hong Sang-soo’s sixth film which has never had a proper U.S. theatrical release. The evening was a delight for art house fans of the work of Hong Sang-soo and featured a Q&A with Dennis Lim, an expert on the films of Hong Sang-soo and the author of a new book Tale of Cinema (Fireflies Press, 2022) and this rare screening of Tale of Cinema. As Lim shows in his book, the key feature of Tale of Cinema is the trope of a film within a film to tell two stories, that of a depressive young man (Ki-woo Lee) who forms a suicide pact with a friend (Ji-won Uhm); and the tale of a filmmaker (Kim Sang-kyung) who sees a film that he believes was based on his life, and who meets the actress from the film with view to turning their onscreen relationship into reality.

As the title suggests, Tale of Cinema is a movie about filmmaking, and it features a film-within-a-film (ostensibly the work of one of the characters) that splits the action between the filmmakers’ lives and their onscreen productions. What’s more, its narrative structure includes no signposts – the film offers viewers an unmarked journey into undiscovered country and, then, only midway through, maps out the landscape, distinguishing authentic settings from Potemkin villages. These artistic deceptions and revelations are at the heart of the story, about a young filmmaker’s personal devotion and disillusionment – and, in the process, a loss of illusions regarding the cinema itself, as art and a way of life.

As the film begins, Sang-won (Lee Ki-woo), an aimless and indecisive college student on school holiday after final examinations, avoids walking together with his older brother where they visit a guitar shop and his older brother gives him some money to get by. He makes up an excuse to not go hiking with his brother the next day and, instead of accompanying him, decides to meander down a side street, where he runs into a former classmate and girlfriend named Young-shil. Young-shil (Uhm Ji-won), who dropped out of high school – because, she tells him, “My teacher was a pervert, always feeling me up” – and is working in her uncle’s optician shop.

Unsure of his own emotional preparedness in rekindling the relationship, he decides to watch a play entitled “Mother” while waiting for her to complete her work shift, delaying the decision to meet her later in the evening. The final words of anguish in the play, uttered by a desperately ill child unable to be comforted by his mother, would later be echoed by Sang-won. Sang-won invites Young-shil to dinner (spending money given to him by his older brother for living expenses); they both drink heavily and spend the night in a seedy hotel, where they blunderingly rekindle their sexual relationship. In bed there, Sang-won suggests that they make a pact to kill themselves, and Young-shil unhesitatingly agrees.

Hong devotes an extraordinarily pained and astonished attention to the many practical and incongruously mundane steps that the casual lovers take in preparation for carrying out their plan – not just gathering the pills that they plan to use, but also buying soju and dried squid, looking for a pack of Marlboros, getting a notebook in which to write some last words, fretting about the hotel bill – and, amid this banal ballast, going through uncontrollable waves of emotion along the way, while also bringing to the fore the tormented-adolescent family stories that had already pushed Sang-won to the edge of a melodramatic, self-dramatizing precipice. The two are conflicted about making love in the tawdry love hotel where they decide to spend the night. Ultimately, the two aren’t successful with their suicide attempt and Sang-won is later visited by his father in hospital who takes him home again. It seems that the mother is responsible for Sang-won’s depression, yet she is not willing to take any blame. Can Sang-won really overcome his crisis and go on living? Up on the rooftop of his parents’ apartment after his own failed act of despair, Sang-won echoes the final words of the play “Mother” that he had seen the previous night.

In the film’s corollary chapter, Dong-soo (Kim Sang-kyung), a recent film-school graduate is a struggling, rootless, and inscrutable filmmaker who has become obsessed with a short film directed by his former classmate – and in particular, with the devoted and obliging woman in the film. Dong-soo runs into another young woman, also named Young-shil (also played by Uhm Ji-won), an acclaimed actress. He begins to ingratiate himself into her company, acting out his projected image of her by imitating gestures and revisiting locations from the film in an attempt to realize his own created image of her.

Later the same day, there will be a gathering at a restaurant to honor – and to collect funds for –an elder and notable director named Yi Hyong-su, who is hospitalized with a possibly fatal illness. Yi was Dong-soo’s mentor in school and gave Young-shil her start, but his relationships with both young people ended poorly. The party, attended by movie professionals and film-school students – his devotees and his rivals – is a toxic stew of envy, contempt, and resentment, which boils over in the form of insults and flattery alike. The environment brings Dong-soo and Young-shil together in a complicity of shared secrets and shared ambivalence.

After the first half of the film, we get to know in the form of a sudden cut, that the story about Sang-won and Young-shil was nothing more than a movie. Nevertheless, the story is actually Dong-soo’s life. He meets the actress who played Young-shil and henceforth stays at her side. He wants to relive his past with her.  Interestingly, the story starts to become repetitive – a favorite structure in most of the Hong Sang-soo films that follow Tale of Cinema. The two characters – Dong-soo and Young-shil both (again) get drunk and spend the night together. Even the cigarette brand Dong-soo is smoking is the same, which is one of the proofs of Hong’s great eye for small details.

However, while the actress of Young-shil is able of telling apart movie from reality, Dong-soo is carried back to his old feelings of emptiness having the wish to commit suicide again. But the actress slowly shows him what life is worth. Dong-soo sees his dying friend from his old film academy days again and has to overthink his position and way of thinking. What’s fascinating is that we never get to know if the dying director did really make a movie out of Dong-soo’s life. Sure, they both were friends, but maybe Dong-soo just recognized some parts of his life in the movie and started up putting himself into the role of a fictitious character.

As a filmmaker, Hong Sang-soo manages very well to blur the line between fiction and reality. On the one hand, both “movies” in Tale of Cinema have a documentary feeling to them, but on the other hand, we always get shown that the whole thing is nothing more than a movie. Hong does so by using only one artistic trick, that is omnipresent throughout the whole movie. Every time the two main protagonists talk with each other the camera zooms in. This “zoom” shot became a trademark of Hong in his other films, as it provides a kind of directorial intrusion akin to the style of Godard and much like the voice-overs that Hong also began to incorporate. These techniques make sure that everyone is aware of the fact that the second half of Tale of Cinema is also just a movie.

In Tale of Cinema, Hong wants to make his audience think about the ideas his characters embody. There are no clear answers and Hong wants us to think about their characters and their situations. He brings to the fore a matched pair of ideas that have been at the center of his career – cultural transmission and the eternal battle between the generations. Inchoate, potentially self-destructive adolescent ardor helps to fuel young adults’ artistic ambitions. Yet young artists are often bitterly frustrated, struggling to make work while depending on personal relationships and professional connections with their elders in the same field. The elders, for their part, struggle to maintain their positions in their fields, often against the rising tide of the young people who threaten to take their places, but on whose inspirations, originality, energy, and youth itself they depend.

Born in 1960, Hong started his directorial career in 1996, when he was thirty-six. Tale of Cinema, his sixth feature, came out in 2005, when he was forty-five. Though he winks at himself in the two younger men’s names (Sang-won and Dong-soo) and suggests, in the process, his own adolescent turmoil and early-career struggles, he was looking at them from a position closer to that of the character Yi, longing to tell tales of youth while rushing against the press of time, against his own mortality. The great paradox of movies is that, though it is the youngest art, surprisingly few of the greatest directors got their starts in their own youth. This is all the more true in recent international cinema, where the centralization of film financing and production reproduces the multiple hurdles of the studio system.

Though he attended film school in the United States, Hong is the most French of non-French directors, drawing comparisons to Éric Rohmer and Jean Eustache, Alain Resnais and Philippe Garrel. He has made two films in France, has twice cast Isabelle Huppert, and has worked with French producers. (“Tale of Cinema” is co-produced by the great French producer Marin Karmitz). Above all, Hong’s career has been centered on a reconsideration of the cinematic tradition he inherited, in a way that evokes the enduring influence of the French New Wave. The New Wave filmmakers entered the field at a time when the French film industry was largely closed to young directors. They set out to rejuvenate it, by making the substance of their own lives and milieu the stuff of their films, while also obsessing about the history of cinema and their own relationship to that heritage. Unlike those filmmakers, Hong doesn’t borrow genre conventions; rather, he extends their vision of the world of cinema itself.

In “Tale of Cinema,” Hong displays both the frustrations of youth and the exhaustion of middle age, without any signs of flourishing in between. (That would come in his next feature, Woman on the Beach, from 2006.) The film suggests that the movie industry’s maturity imposed on him a premature senescence, that the norms of the profession entailed an artistic progeria which Hong ultimately resisted by making the drastic decision to shift to self-production. Since 2008, with his film Like You Know It All, he has found financing independently – through his own production company – and worked with exceptionally low budgets, around a hundred thousand dollars per feature. It has allowed him to craft a freer method of production, in which he follows his inspirations day by day, composing films as he goes along and bringing each day’s new material to his actors on location. Hong films very quickly, with a very small crew, and the results have been astounding, both in quality and quantity – his reassertion of control and reinvention of his methods have wrought his cinematic rejuvenation.