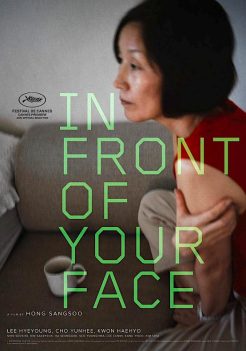 Los Angeles, CA (The Hollywood Times) 5/15/22 – Screening on Saturday, May 14 at the Los Feliz Theatre and also at the Aero Theatre was In Front of Your Face (South Korea, 2021), the latest film by minimalist director Hong Sang-soo. Hong Sang-soo’s In Front of Your Face is an obsessive rumination on the little squabbles and inconveniences and pleasures that add up to the bulk of our lives. Throughout this elegiac production, Hong lingers on details that most filmmakers would either take for granted and entirely disregard. In the film, characters talk about whether to get coffee, a small stain on a dress becomes an existentialist symbol of control, and, of course, there’s a prolonged soju-drinking session with a blinkered male artist in which a few emotional cards are finally laid on the table. The beauty of this film is how Hong takes potentially tedious tangents and renders them with rapturous intensity. He returns to the same ground throughout his films and justifies the repetition, which becomes resonant in its own right. Like Rainer Werner Fassbinder claimed to be doing, Hong is building a house – an interconnected series of films about the collision of everyday reality and deeper truths.

The story is simple: Sangok (Lee Hye-young) is on a return visit to Seoul from the U.S., though it takes Hong several minutes to reveal even such rudimentary exposition. The first several images of In Front of Your Face are largely silent, except for life-affirming voiceover by Sangok, who vows to live in the present and be attentive to, well, what’s in front of her face – a phrase that’s later directly evoked in a moment of painful catharsis.

Sangok (Lee Hye-young) wakes up on the couch of her sister’s apartment. She touches her own thigh, then her stomach. It’s a subtle, passing moment, one that in another context might amount to nothing. But what follows her moment of body consciousness feels relevant, if somewhat mysterious: a form of self-guided meditation, as Sangok’s thoughts become voiceover. “Everything I see before me is grace… There is no tomorrow… This moment right now is paradise.” It’s a prayer of some sort, with more to follow, and in Hong’s spare world of quiet, muted characters, this type of ambiguous interior reflection and delicate physical gesture can take on larger meaning.

After years of living in the U.S., Sangok is visiting Seoul and her sister, Jeongok (Cho Yunhee). The women spend the morning together getting coffee and walking through a lush, green park, steadily realizing they know very little about each other’s adult lives. Telling details bubble up, slowly, to the surface of what feels like small talk: Sangok was an actress who quit acting. She left for the U.S. because of a man. She has no savings. She works in a liquor store. There’s a suggestion of instability, of more troubling information being held back, but Sangok keeps whatever it is to herself.

Eventually, Jeongok admits to feeling abandoned, but the hurt feelings surge and subside without boiling over. Family love and dutiful forgiveness take priority in spite of what may be unspoken and unanswered. And Hong is in no hurry to decode, either, as minor incidents – a dream Jeongok refuses to talk about, Sangok accidentally staining her blouse – become recurring motifs of concealment and disclosure. To hide the stain under a jacket? To keep your long-lost sister waiting to hear the almost certainly banal details of your dream? To change clothes? Or to decide none of this is a big deal in the face of vague, larger trouble?

The morning turns to afternoon, the sisters part ways, and Sangok visits their childhood home amidst a rush of overwhelming memories. Then a second meeting, this time with Song Jaewon (Hong regular Kwon Hae-hyo), a filmmaker who wants to make a movie with Sangok and resurrect her acting career. They meet in an empty bar, order in Chinese food, and talk. The sequence is classically Hong – nearly 30 minutes duration, during which the camera rarely moves and characters sit at a table, unfolding the story through halting conversations that take on cumulative power.

It’s here that Sangok’s interior monologue takes tangible shape. Her secret is revealed to this stranger, and her visit, her personal contacts and meanderings through gardens, the accumulated silences and solitary gestures begin to make sense. But this reveal isn’t a key to a mystery. It’s not the solution to a narrative problem. It’s the opening of a door into Sangok’s current purpose, one centered on keeping her life her own. Upon learning Sangok’s true situation, Hong is distressed to the point of needing her comfort, and she gives it, simply, telling him, “I believe heaven is hiding in front of our faces.”

Songok’s process of reconciliation, her real conversation, is with herself and her life, in a way not always characteristic of Hong’s art. “In Front of Your Face” moves laterally from the circumspect and sometimes bitter emotions of some of his earlier work, as Sangok’s secret allows her to directly access and openly declare her feelings. Lee Hye-yeong is magnetic as Sang-ok. Her face seems like she has been through too much yet it hides a personal secret that Hong is in no hurry to reveal.

Built on the back of a heavy sense of trouble, and perhaps initiated by the visit and reunion with Jeongok, Sangok’s initial interior focus – talking herself down from restless and obsessive thoughts, repeating reminders to herself to let the past and future slip away in favor of the present moment – liberates her to the point where she can speak without ambiguity about the joy she finds in her life’s current moment, first to a man she’s never met and, possibly, later to Jeongok.

The result is one of Hong’s most emotionally generous films. In a career full of small triumphs, it’s a beautiful gesture of family love, of non-specific spiritual awakening, and self-possession meant to create outward waves of goodness. And it comes down to Sangok’s words, repeated throughout, until they take root and grow: “If I can see what’s in front of my face, then I’m not afraid of anything. Everything is complete. It’s grace.”

It’s hard to keep up with Hong Sang-soo.  Here we have a new piece titled In Front of Your Face which premiered at Cannes in 2021. A few months prior, he premiered Introduction at the Berlinale 2021, winning Best Screenplay in the process.  Earlier this year, he presented his new work, The Novelist’s Film (2022) at the Berlinale. The American Cinematheque will be screening Hong Sang-soo’s In Front of Your Face at the Los Feliz Theatre, from May 13 through May 22. In addition, the American Cinematheque is offering a retrospective of some of Hong’s films. On Sunday, May 15, 4:00 PM, Hong’s award-winning HaHaHa (2010) will screen at the Los Feliz Theatre. On Sunday, May 22, 4:00 PM, Oki’s Movie (2010) screens at the Los Feliz Theatre.  On Wednesday, May 25, 7:00 PM, The Day He Arrives (2011). There will be a number of other Hong Sang-soo films in the retrospective at the Los Feliz and also at the Aero Theatre. You can check out the full list at: https://www.americancinematheque.com/now-showing-series/