Los Angeles, CA (The Hollywood Times) 8/15/21 – Screening at Outfest 2021 on Sunday, August 15, is a new film from Joseph Sackett, Homebody (2021), a genderqueer body-transfer absurdist comedy. Nothing is quite as special as a child’s relationship with their babysitter, and nine-year-old, gender-queer Johnny is obsessed with theirs  – so much so that they’ve meditated their spirit right into her body! But when Mom comes home early, Johnny must navigate the outside world as an adult woman (clothes, make-up, horny would-be boyfriends, witnessing childbirth as a doula). In this utterly charming Freaky Friday meets Being John Malkovich fantasy, Joseph Sackett explores gender expression with pure wonder through a fresh and whimsical lens in his hilarious and touching feature debut.

Homebody started out a short film that Sackett made a few years before called I Was in Your Blood, a short about a little boy named Tre who falls in love with his babysitter Melanie (Colby Minifie). Although, of course, this is like a nine-year-old’s version of love, so it’s not “I want you, it’s more “I want to be you.” And at the end of that short, he has a dream about going into her body. Sackett explains: “I didn’t have any intention of expanding that short into anything bigger. But I really enjoyed writing and working in that world, remembering how much I loved my babysitters as a kid. At some point, I thought what if we did the Being John Malkovich version of the story where instead of just dreaming about going into his babysitter’s body this little boy actually gets to do that.” Sackett feels that as child he felt genderqueer, sometimes feeling like a boy and sometimes like a girl.  Of course, a young child does not have the vocabulary to explain those feelings. “Homebody is me processing those complicated emotions from my childhood, and also having some fun in this playful, wish-fulfillment fantasy space.” 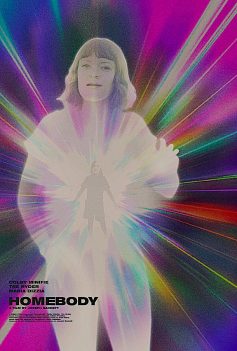 The script evolved in a collaborative way with much input from the actors, especially Colby Minifie, the main actress who plays the babysitter. Some of my favorite lines in the movie happen in voiceover when Johnny’s consciousness and Melanie’s consciousness are talking to each other inside of her head. In some scenes, the actors were allowed to improvise. Sackett wanted his feature film to lead to a happy ending, despite the turmoil about identity that many children experience. “I wanted to honor how difficult and confusing it is to be a young person, but I also wanted to celebrate the thrill of self-discovery and of transgressing gender boundaries.” There are so many movies about body swapping, because the fantasy of experiencing the world through someone else’s eyes is one of the deepest and most basic pleasures of cinema. Much of the pleasure of this film is entering into that experience of body-swapping through the eyes of young Tre (Tre Ryder).

Homebody screens at the Harmony Gold, August 15 at 4:30 pm. It can also be viewed online through the virtual option from 8/16 through 8/18. For tickets, go to https://outfestla2021.com/homebody/