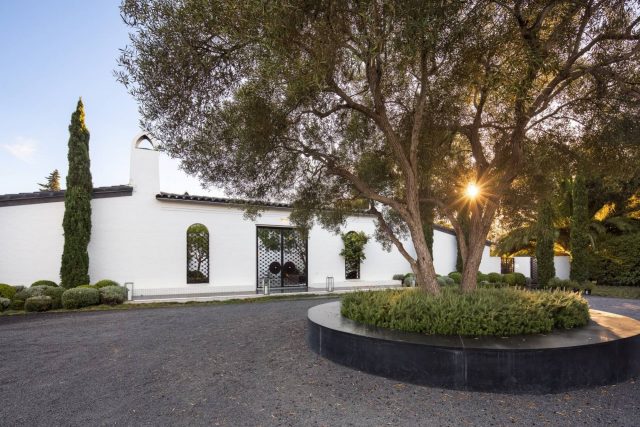 Wallace Neff designed some of Southern California’s most important celebrity homes including the Pickfair Estate in the 1920s. And a former working windmill in the Hamptons that was converted into a home in the 1950s by the founder of Faberge cosmetics.

One of the first architects for the Hollywood stars was Wallace Neff, who designed a number of Southern California’s most important homes including the Pickfair Estate for Mary Pickford and Douglas Fairbanks – the Brad Pitt and Jennifer Aniston of the 1920s. Pickfair was the first Beverly Hills celebrity mansion, the longtime hot spot for Hollywood’s movers and shakers, had the first residential swimming pool in Los Angeles, and was compared to the White House by Life Magazine.

Although Pickfair was demolished in 1990, Neff had a long home-designing career from the 1920s until his death in 1982. He is often credited with creating the California style of homes with vaulted ceilings, courtyards, lush landscapes, and lots of glass. He was a favorite of celebrities who bought his homes including Charlie Chaplin, Darryl Zanuck, Bob Newhart, Madonna, and Diane Keaton. One of his later designs was the Straus House built in 1970 for Macy’s department store heir Robert Straus. Restored, expanded, and modernized over a 10-year period, the Straus House is now for sale. Previously priced at $32.75 million in 2017, the listing agent has not yet publicized the new price, it is only available by request.

Eye-catching with a black circular driveway paired against the stark white of the building, the Straus House is located in the small and highly regarded equestrian-and-seaside community of Hope Ranch in Santa Barbara County’s Montecito neighborhood. Behind the stylized wrought-iron gates that open to a courtyard, the hacienda-style house spans 14,000 square feet in an “H” floor plan on one floor and big ocean views. The center section is a massive gathering room with a vaulted ceiling of floor-to-ceiling glass facing the Pacific with the Neff-designed raised fireplace. There are five bedrooms and five baths divided between the two wings, a completely refurbished chef’s kitchen, a dining room with ocean views, a theater, a wine cellar, and a den with a fireplace. One of the home’s most interesting features is the guest house that is under the back lawn’s first level, which leaves the view completely unobstructed.

Mr. Strauss had previously been living in a home in Bel Air that Neff designed in the 1920s, and they liked it so much that they hired him for their Montecito home. Almost 50 years later, the current owner worked closely with the Santa Barbara historical committee on all aspects of preserving the integrity of the design and inspiration of Neff’s work while simultaneously creating a world-class estate.

Montecito sometimes referred to as “Beverly Hills North,” has surged in both price and popularity in recent years, the hometown for big stars including Oprah Winfrey and Ellen DeGeneres. With its mild climate, world-class beaches, and natural beauty stretching from the ocean to the mountains, Montecito has been a popular backdrop for the movie industry with over 1,000 movies filmed there since the early 1900s. According to local real estate agents, Montecito home prices have more than doubled in the last few years.

Both a rare conversation piece and a charming small home, a former working windmill that was converted into a home in the 1950s by Faberge cosmetics-founder, Samuel Rubin, is now for sale priced at $11.5 million.

The windmill is believed to have been built by the descendants of the first Dutch settlers in Amagansett: the brothers Abraham and Jacob Schellinger. When New Amsterdam, at the tip of what is now Manhattan, was taken over by the British, Abraham and Jacob’s father moved the family to Amagansett, where the family built a windmill 200 years later to provide power for the next-door apple orchard, which still exists.

When Rubin bought and converted the windmill into a home, he had tennis courts and used the property to entertain friends. Though only 1,300 square feet with two bedrooms and one bath, the house sits on 5.3 acres and is only a few minutes to both Napeague Bay and the Atlantic Ocean. The ground floor opens to an 18’ by 18’ hexagonal living space with wide-plank hardwood floors and exposed-beam ceilings and a stairwell with a rope banister that leads to the upper levels. Also on the main level are the kitchen, a bedroom, and a bath. The second floor of the windmill is the main bedroom, and above that is the unfinished tower room that housed the wooden mechanical workings of the sails, including a break that would stop them. Many parts of the original hand-hewn works are still there.