Los Angeles, CA (The Hollywood Times) 10/09/2020- According to Centers for Disease Control and Prevention, each day in the United States, approximately 9 people are killed and more than 1,000 injured in crashes that are reported to involve a distracted driver. Distracted driving is when one driver is doing an activity that takes their attention off the road.

There are three different types of distractions that can cause an accident: Visual, Manual, and Cognitive. Each of these distractions have a huge impact on your ability to operate a vehicle safely which affects each individual out on the road. Distracted driving has become a huge concern for the National Safety Council, a nonprofit, nongovernmental public service organization that promotes health and safety in the US. They have partnered with Hollywood stunt driver, Brett Solomano, who raised awareness about the dangers of distracted driving by attempting to beat a Guinness World Record.

On September 30th, Solomano reversed a tractor trailer continuously for over 50 miles nonstop, driving for nearly four hours at an average speed of almost 15 miles per hour on the Turner Field – Gold Lot in Atlanta, Ga. This led him to break the world record for staying focused and reversing a truck and semi-trailer (a total of 160 laps), totaling 54.4 miles, the longest distance ever without stopping.

“When I decided to beat the Guinness World Record, I thought it would be a great accomplishment for myself. However, I chose to participate in Distracted Driving Awareness Month because I wanted to raise the bar for myself to become a better friend, family member, and ultimately a better person. It calls attention to every distraction that happens while on the road and brings awareness to how important it is to avoid these distractions when you head out,” explained Solomano.

At a young age, Solomano acquired a curiosity for the stunt industry which was heavily supported by his father who was a math and physics whiz who worked in an explosives factory. His dad would teach him how various stunts worked and how special effects were created. His years in high school helped him decide on a life filled with excitement and danger as a stuntman.

“I lived in a small country town in Australia, so when I was young, I would watch movies to escape the boredom. Then in high school, I worked on my own film projects that worked with stop motion and it piqued my interest into the world of stunts,” said Solomano.

Being an experienced stuntman lead Solomano to become a stunt double for many established actors in the entertainment industry.

“I am a stunt driving double for Dennis Quaid in the film, The Tiger Rising. I was also a stunt double for Jeffrey Dean Morgan in The Walking Dead series. I have done many stunts on that show over the past couple of seasons, including a motorcycle crash,” claimed Solomano.

Besides being a stunt driver, Solomano has worked on films with ropes and rigging and he has been lit on fire for training sessions, but has not gotten to use this skill on camera as of yet. As he prepared for this next stunt, Solomano spent many hours perfecting the skills necessary to prepare for this world record.

“This stunt required a lot of mental focus to be able to successfully complete it. If I lost focus for even a second then it could cause something to go wrong. While I’ve been driving trucks for years, each stunt is different and you have to go in with a fresh mind each time so I also spent many hours at the lot itself with the truck. I am a huge fan of visualization and would also sit in bed at night visualizing the stunt and going over it in my head,” explained Solomano.

Once Solomano decided to defeat this world record, there was a lot of factors that needed to be figured out.

“The hardest part for me was making sure everything was right for the day. There were lots of options that I could have used for different locations and trucks. I had to decide what would be the best fit for such an unusual driving task. I spoke with a lot of mechanics about which trucks would best survive several hours reversing at high speed and our team needed to find the right location, which we decided on the Gold Lot as it was the safest route and the closest lot we could get to Atlanta. Even then there were several light poles and pot holes throughout the lot and a slope that needed to be considered. When encountering a slope, the trailer would pull in one direction and I would have to compete with that lean to keep the trailer going where I wanted on each lap. Therefore, there were many physical obstacles to be dealt with,” said Solomano.

As the event drew near, Solomano expressed a huge concern that would affect the outcome of his attempt at the world record.

“A question I thought a lot about was what if I lost my concentration and couldn’t keep the trailer on the course? I wasn’t allowed to pull-up and reset if I did so I might miss the record, or worse, being that I was sometimes reversing at over 20mph, mistakes can happen quickly at any speed but especially at that speed and in reverse. I might have hit a pole or jackknifed the truck which would have been very disappointing and embarrassing.” expressed Solomano. “I wasn’t worried about injuring anyone as the course was closed with police and traffic control on the premises to keep everyone safe. However, to black out for a second and ruin the truck would be disappointing.”

When asked about the danger involved in a stunt of this magnitude, Solomano compared it to a professional sport.

“Yes, there are risks involved but, like a professional sportsman, we train as best as we can and work diligently on our skills. We consider all aspects of the stunt and then when the day of the event comes, we put our heart and soul into it. Like any other athlete we often come away sore and exhausted, but it’s all a part of the game. And we love the game,” claimed Solomano.

As the National Safety Council takes on the challenge to help raise awareness by facilitating the National Distracted Driving Awareness Month in October 2020, you can participate by donating to this cause as well as taking the pledge which claims that you will stay distraction free while driving. You can find more information at www.longesttruckreverse.com.

Solomano would like to see people make their pledge on social media while tagging their friends to do the same. It would cause a strong movement towards safer roads. 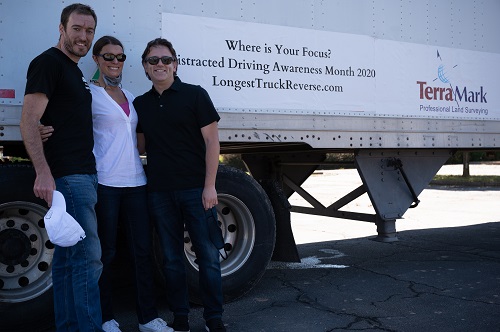 Brett (L) standing next to Jacy Good (C) and Steve Johnson (R) from HangUpAndDrive.com. Jacy’s parents were killed, and she suffered injuries from a distracted driver